CS Lewis ( Clive Staples Lewis, privately also called Jack ; born November 29, 1898 in Belfast , † November 22, 1963 in Oxford ) was an Irish writer and literary scholar . He taught at Magdalen College of the University of Oxford and had the Department of English Literature of the Middle Ages and the Renaissance at the University of Cambridge held. In the Anglo-American region in particular, he is known for his children's book series, The Chronicles of Narnia, which has now also been filmed . 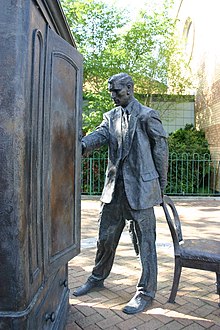 Memorial to C. S. Lewis by Ross Wilson in Belfast

Clive Staples ("Jack") Lewis was born in Belfast, Northern Ireland, in 1898 and grew up there with his three years older brother Warren ("Warnie"). His father Albert James Lewis was the first of his family to take up an academic career, he was a lawyer . His ancestors came from Wales and worked in agriculture. The mother Florence Augusta Hamilton Lewis ("Flora") was a pastor's daughter and studied mathematics and logic at Queens University . The parents were very well read and had a large house library, which fascinated the young Jack and gave him access to literature .

A deep and traumatic turning point in Jack's life was his mother's cancer . After initially improving, her condition worsened. She died in August 1908 when Jack was nine years old. In the same year a grandfather and an uncle also died. His father then sent him to British boarding schools : Wynyard School in Watford (September 1908 - June 1910), Campbell College in Belfast (September - December 1910), Cherbourg School in Malvern (January 1911 - June 1913) and Malvern College (September 1913 - June 1914). From 1914 to 1917 he enjoyed private lessons with William Thompson Kirkpatrick , from whose clarity of thought Lewis benefited greatly.

Because of the First World War , Lewis had to drop out of his studies at Oxford University College , which he had started in April 1917, and join the British Army. In Oxford he completed his officer training and was promoted to officer in the third battalion of the Somerset Light Infantry. On his 19th birthday (November 29th) he came to the front in France. On April 15, 1918, Lewis was wounded in Mont-Bernanchon near Lillers by self- fire (from a misdirected English grenade) and sent back to England to recover.

In 1919 he resumed his studies at University College Oxford. In 1920 he passed the first public university examination with distinction in Greek and Latin , in 1922 the final examination in philosophy and ancient history and in 1923 the first public university examination in English. Until May 1925, Lewis was a philosophy teacher at University College and received a fellowship in English at Magdalen College, Oxford, where he also met JRR Tolkien .

Lewis had been a staunch atheist since he was 16, but turned to the pantheistic philosophy of English Hegelianism while studying . In 1929, however, he accepted a personal God and the thought of creation: so he became theist . After a long nocturnal discussion with Tolkien and Hugo Dyson in September 1931, he finally converted to Christianity . To the chagrin of the staunch Catholic Tolkien, however, he stayed in the Anglican Church, to which his ancestors had belonged. However, apart from his rejection of the papal primacy, he mainly represented views that were acceptable to Catholics.

From the fall semester of 1933 to 1947, Lewis met with his circle of friends, the " Inklings, " which also included JRR Tolkien, his brother Warnie, Owen Barfield , Nevill Coghill , Hugo Dyson , Charles Williams and others. Over the next several years, Lewis became known for his lectures, publications in Christian magazines, and radio addresses broadcast on the BBC . In 1948 he was elected a member of the Royal Society of Literature and received three honorary doctorates in theology and literature over the next few years . From 1954 he held the chair for literature of the Middle Ages and the Renaissance in Cambridge . In 1958 he became an honorary member of University College Oxford. 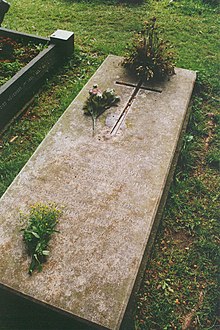 On April 23, 1956, Lewis civilly married the American writer Helen Joy Davidman in Oxford to save her and her two sons from deportation from England. It wasn't until he found out about her cancer that he began to love her consciously. On March 21, 1957, an Anglican rite ceremony was performed on her bed at Wingfield Hospital by clergyman Peter Bide, although Joy Davidman was divorced. In the next few years her illness initially improved.

In July 1958, Lewis went to Ireland for ten days with his wife , after which he gave ten lectures on The Four Loves in London. Joy died on July 13, 1960 at the age of 45, which plunged Lewis into a deep crisis of meaning, belief and life. In 1961 he processed this crisis literarily in A Grief Observed (German: About human mourning ), which he first published under the pseudonym NW Clerk.

CS Lewis died of complications from kidney failure a week before his 65th birthday on November 22, 1963. His death was barely noticed in the press because the assassination attempt on John F. Kennedy and Aldous Huxley on the same took place less than an hour later Day died.

The tomb is in the garden of Holy Trinity Church at Headington Quarry in Oxford. Lewis' brother Warren died on April 9, 1973. Their names are on a common stone with the inscription that Warren had chosen: Men must endure their going hence (“Man must endure his departure from the world”).

In addition to his literary critical works, CS Lewis wrote well-known Christian apologetic writings as well as the children's book series, which also uses Christian symbolism, on the land of Narnia (genre fantasy ) and the Perelandra trilogy (genre science fiction and fantasy).

Lewis was the center of the Christian literary circle of the Inklings and for a long time was close friends with JRR Tolkien . The two authors influenced each other significantly. Later, however, this friendship cooled because of Tolkien's criticism of the "Narnia Chronicles", in some of Tolkien's late letters there are extremely negative personal attacks on Lewis. Another close friend of Lewis was the British writer Charles Williams (1886–1945), who wrote theological books, novels, poems and literary texts.

He often referred to the Scottish pastor and writer George MacDonald (1824-1905) as his role model and his "master". In the book The Great Divorce (Engl. The Great Divorce ) he MacDonald even occur as a character. In his narrative work, Lewis highlighted questions of Christian ethics and doctrine. His novel You Yourself Are the Answer (English original title: Till We Have Faces: A Myth Retold ) is a version of Amor and Psyche from the point of view of Psyche's sister and is considered by some literary critics to be his best work.

In February 1943, Lewis held at the University of Durham , the Riddell Memorial Lectures, a three-part lecture series, later known as The Abolition of Man (dt. The Abolition of Man ) was published and is his most famous literary work times. He criticized the supposedly superficial school material that would lead students to a worldview devoid of any objective values . The collected lectures of Lewis, which the BBC broadcast, were published under the title Mere Christianity (Eng. Christianity par excellence or pardon, I am a Christian ). Lewis wrote numerous writings on theological topics because he had got the impression that the professional theologians were not resolute in explaining Christian doctrine, but rather full of "ifs and buts."

Lewis felt it was important to take a concrete look at the existence of a hell . In About Pain he wrote:

"In all discussions about hell we have to keep in mind that it is truly possible - not for our enemies, not for our friends (both of which cloud the clear vision of reason), no: for ourselves."

Lewis was a well-known figure in Britain during his lifetime through his books and popular radio speeches. After his death in 1963 he was somewhat forgotten because the young generation was looking for change and thus distance from the culture of their parents. Lewis embodied the values ​​and attitudes of the past for them, and he was not particularly respected by scholars in Oxford because of his popular works. At first he had few advocates like the American episcopalists Chad Walsh and Walter Hooper , who had become his private secretary shortly before Lewis' death.

Since 1955 he was a member ( fellow ) of the British Academy . 1956 Lewis received the Carnegie Medal in recognition of the last book of the Narnia Chronicles The Last Battle (dt. The last fight ).

In the early 1970s, the British publisher William Collins & Sons acquired the rights to Lewis' works and distributed them. He benefited from the fact that the Tolkien wave in the USA around 1970 made him and his Narnia children's books popular again. In the United States in particular, literary societies emerged that nurtured Lewis' legacy. The New York CS Lewis Society was a pioneer in 1969 , others followed later worldwide. In 1974 the Marion E. Wade Center was established at Wheaton College near Chicago for the study of the life and work of Lewis. From 1974 onwards, more in-depth biographies began to appear and, since 2000, Walter Hooper has also published Lewis' extensive correspondence (3,500 pages).

In 1993, the friendship and love between CS Lewis and Joy Davidman was filmed in Richard Attenborough's film Shadowlands with Anthony Hopkins and Debra Winger .

In 2001 the asteroid (7644) Cslewis was named after Lewis. 2017 he was posthumously into the Science Fiction Hall of Fame added

"If we discover a need in ourselves that cannot be met by anything in this world, then we can conclude that we were created for another world."

"Anyone who sees through everything can no longer see anything."

- CS Lewis : The abolition of man

"Nothing we haven't given away will ever really be ours."

“No Englishman will be able to understand my first impressions of England. [...] The foreign English accents that penetrated me from everywhere seemed like the voices of demons.
But the worst was the English countryside between Fleetwood and Euston. [...] These miles upon miles of uniform landscape that cut you off from the sea, imprison you, suffocate! […] In the meantime, the enmity is buried, but at that moment I was seized with a loathing for England, which only healed after many years. "