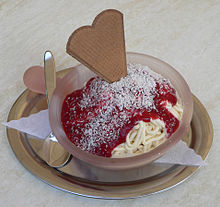 Spaghetti ice cream is an ice cream preparation common in Germany , which is supposed to be reminiscent of spaghetti with tomato sauce and parmesan .

According to regional newspaper reports, various ice cream manufacturers claim that spaghetti ice cream was invented in 1969. The Neuss ice cream parlor owner Eliano Rizzardini, who died in 2000, stated according to publications from 2004 onwards that he had developed the ice cream creation. The Mannheim ice cream manufacturer Dario Fontanella also claimed to have invented the spaghetti ice cream on April 6, 1969, based on the Montebianco dessert . To get the ice cream into the shape of spaghetti, he used a spaetzle press , which, however, melted it because of its too high temperature. After cooling the spaetzle press in a freezer compartment, he managed to use it to produce the spaghetti-like ice threads. According to Fontanella, he initially intended to have the court patented, but decided against it because of the filing fee of DM 200 required.

The creation became increasingly popular over the next few years and was later considered a symbol of "the great time of Italian ice cream parlors in West Germany in the 1970s and 80s". The author Thomas Brussig describes it in his novel How it shines from the perspective of East Germans as the “taste of the West”. 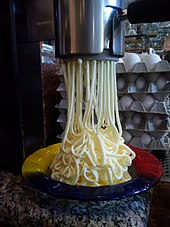 Traditionally, spaghetti ice cream usually consists of vanilla ice cream pressed over whipped cream in a bowl , whereby the whipped cream freezes when it comes into contact with the cold vanilla ice cream and thus develops its special taste. The ice cream is pressed through a cooled spaetzle press, which gives it the noodle-like shape. The whole thing is garnished with strawberry sauce and grated white chocolate (or coconut flakes). The strawberry sauce is supposed to imitate the tomato sauce common in spaghetti dishes and the white chocolate is supposed to imitate the cheese.

According to Dario Fontanella, in the early days of the ice cream specialty, tears were said to have broken out more often in children who wanted an ice cream sundae and not pasta with tomato sauce.