Activism is a redirect to this article. For further meanings of both terms, see Activist (disambiguation) .

As activists (from Latin activus "working actively") a person referred to in a particularly intense way, with activism enters certain, for enforcement purposes. Often these are political in the broadest sense and come in particular from the areas of economic , environmental and social policy as well as civil and human rights . Other activists campaign for animal rights and, for example, against animal experiments , factory farming and genetically modified food . Due to the growing importance of the Internet , more and more people have recently been campaigning for data protection and against excessive state surveillance .

An activist differs from a politician primarily in that he does not want to achieve his goals through direct participation in the formal political process, for example by seeking political office or participation in a party , but in a more informal way - for example through public relations , Demonstrations and, more recently, intensified by Internet activities such as online voting , also known as cyberactivism . Parts of some movements also see violence as a possibility.

Karl Popper defines activism as “the inclination to be active and the aversion to any attitude of passive acceptance.” The opposite term to activism is attentism . In contrast, the term actionism is generally used for an aimless, unreflective approach aimed at activity as an end in itself . In various movements, people who run a campaign or project are called campaigners. This word is also understood in other languages; besides, it does not evoke any negative connotation .

The terms activist or activism can be found e.g. B. Use in the following areas:

"The role of intellectuals and radical activists is to judge and evaluate, to convince and organize, and not to seize power and rule."

At the beginning of the 20th century, the word "activism" referred to a philosophical line of thought. The philosopher Rudolf Eucken represented a “creative activism” in the basic lines of a new view of life (1907). In Rudolf Eisler's Philosophen-Lexikon (1912) activism is mentioned as a philosophical school. In the second edition of his concise dictionary of philosophy (1922), a literary form of activism is also mentioned. The writer Kurt Hiller had used the word since 1914 as a name for a literary movement in contrast to Expressionism . While the latter denotes a mode of expression, activism is about an attitude. Hiller also used the term activism against "passivism". Karl Kraus mocked the current in 1920 in his magazine Die Fackel . The writer Robert Musil uses the term “active passivism” in his novel The Man Without Qualities . 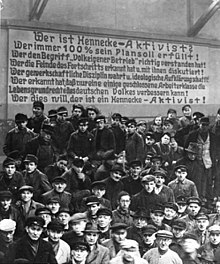 The term used by the National Socialists as a positive self-designation (for example by Hans Schemm , who wanted to create an "activist core force" in the teaching staff in 1929, or by Joseph Goebbels in a letter of March 30, 1945 on the establishment of the "Freikorps Adolf Hitler" in the "Volkssturm " , where he writes of" activists of the movement, volunteers of the Volkssturm and volunteers of the Werkschar "), was consequently used in the Control Council Directive No. 38 for a category of people exposed to Nazi Germany. The “main culprits” were followed by the “incriminated” group, including the “activists”.

Article III, Part A stated, among other things: “An activist is:

as well as: "Anyone who, after May 8, 1945, has endangered the peace of the German people or the peace of the world or is still endangered by propaganda for National Socialism or militarism or by inventing and disseminating tendentious rumors, is also an activist."

The word activist was nonetheless reused in the language areas of the Soviet Zone and GDR for a public benefit and innovation-oriented approach to work . Activist of socialist work was a frequently given award in the context of the socialist competition of the GDR. The miner Adolf Hennecke was built in 1948 as a propaganda model. The day of the activists was celebrated annually from 1949 on October 13th, the day of Hennecke's special shift, in the GDR. The model for the socialist term activist was the Russian word 'activist', which denoted the member of an active , a name for a working group based on the Soviet model.