The Sauropsida (German: Sauropsiden ) are a taxon (a systematic group) of the terrestrial vertebrates (Tetrapoda), which the traditional classes of birds (Aves) and reptiles (Reptilia) together with extinct representatives ( dinosaurs , pterosaurs , plesiosauria and others) in itself united.

The class Reptilia of the traditional systematics is paraphyletic , that is, it does not represent a closed community of descent, because the crocodiles (along with their closer extinct relatives) are evolutionarily closer to the birds than the other modern reptiles (and their closer extinct relatives). The birds were traditionally placed next to the reptiles as an independent taxon of equal rank. The Sauropsida, on the other hand, which traditionally include both reptiles and birds, are a closed community of descent ( monophylum ) and therefore meet the requirements of modern systematics, which only consider monophyletic taxa. Above all in English-language, paleontological literature, however, the term "Reptilia" is still often found, albeit not in the classic sense, but as an alternative term for the taxon Sauropsida, i.e. for a monophylum including birds.

Synapomorphies (common derived features) of the sauropsids include the lack of or largely reduced tabularity (a bone in the back of the skull) and the inclusion of foramina (openings) or windows in the palate region . In addition, in principle all sauropsids reproduce by laying eggs. Only a few species give birth to live young.

The skull of Paleothyris , an early sauropsid from the Upper Carboniferous in Canada, shows numerous original features, for example a primarily unfenestrated temporal region and the presence of a supratemporal (st) in the skull roof.

As early as the Permian and Triassic , some sauropsids achieved a high degree of specialization. Above:  Bradysaurus , a clumsy herbivore from the Pareiasaur group. Bottom:  Shonisaurus , a representative of the ichthyosaurs, the group of sauropsids most adapted to a life in water. 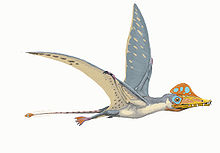 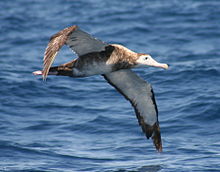 With the pterosaurs (above: Scaphognathus from the Upper Jurassic) and the birds (below: the albatross Diomedea antipodensis ), the sauropsids produced two independent groups of actively flying representatives.

The sauropsids are one of the two large taxa of the amniotes , i.e. those terrestrial vertebrates that can reproduce independently of bodies of water. The other major taxon and thus the sister group of the Sauropsiden are the synapsids , which comprise the mammals and their extinct ancestors. The separation of the synapsid and sauropsid lines probably occurred sometime in the late Lower Carboniferous or early Upper Carboniferous approximately 320 million years ago.

Traditionally, the amniotes (or rather the reptilia of the classical system) were classified based on the temple openings in the skull (temporal window). The sauropsids included the anapsida (without temporal windows) and the diapsida (with two temporal windows). However, the application of modern methods to determine the family relationships showed that the anapsids do not represent a natural group (i.e. no community of descent ), since some of the early windowless sauropsids such as the Captorhinidae were more closely related to the diapsids than other windowless primitive sauropsids such as the pareiasauria , Mesosauria and Procolophonoidea . While the latter were grouped under the name Parareptilia , captorhinids and diapsids were combined under the name Eureptilia . This twofold division of the sauropsids into eureptiles and parareptiles is still in place today.

Within the diapsids, a distinction is made between the extinct Ichthyopterygia (ichthyosaurs and basal relatives) as well as the Lepidosauromorpha and the Archosauromorpha .

The Lepidosauromorpha include the common group of today's bridge lizards , " lizards " (Lacertilia) and snakes, collectively known as scale lizards (Lepidosauria), as well as some extinct groups, to which the Sauropterygia (marine reptiles, including Plesiosauria and Placodontia ) belong.

The Archosauromorpha include some basal, purely fossil representatives such as the Protorosauria (Prolacertiformes) and the Rhynchosauria, the Archosauria . The Archosauria are divided into the Crurotarsi (the crocodiles and their extinct ancestors) and the Ornithodira . Within the Ornithodira the lines of development of the separated Flugsaurier (Pterosauria) and the dinosaurs , wherein from a subset of the dinosaurs, the Theropoden have emerged, the birds. In evolutionary terms, birds are dinosaurs and thus diapsids.

The turtles , which have a windowless (anapsid) skull, are traditionally the only surviving group of the anapsids or parareptiles. Molecular genetic studies, however, lead to the conclusion that they too belong to the diapsids and that they have lost their skull windows secondarily. However, their exact systematic classification is still controversial. Nonetheless, the classification of the turtles among the diapsids means that all (recent) sauropsids living today are both eureptiles and diapsids.

According to the current state of knowledge, the probable relationships of the sauropsids are shown in the cladogram below: