Pech is one of 13 districts of the municipality of Wachtberg in the Rhein-Sieg district in North Rhine-Westphalia . The district has 2,707 inhabitants (as of July 31, 2018). Until the municipal reorganization in 1969 , Pech was a municipality belonging to the Villip office in what was then the district of Bonn .

The place name Bech first appeared in the tax and pension register from 1497 in the Villip parish archive . A previous development around a "Burg Eystorp" is suspected, but cannot be proven beyond doubt. Eystorp Castle is mentioned for the first time in 1412 and is said to have been of Franconian origin. At the end of the 18th century, Pech belonged to the Electorate of Cologne until France occupied the areas on the left bank of the Rhine . The French, who completely reorganized the administration in the annexed areas, introduced the Mairie constitution in 1800 and assigned the community of Pech to the Mairie Villip .

In 1815 the Rhineland and with it the town of Pech fell to Prussia , which took over the French administrative division almost unchanged. The Mairie Villip became the mayor's office Villip , from 1930 the office Villip, in the district (from 1887 district) Bonn in the administrative district of Cologne in the province of Jülich-Kleve-Berg , from which the Rhine province emerged in 1822 through the merger with the province of Grand Duchy of Lower Rhine . Bad luck was one of ten parishes belonging to the Villip mayor's office. In 1910 the community of Pech had 246 inhabitants. Berkum had already been the seat of the official administration since 1873 .

On August 1, 1969, the municipality of Pech was merged with the other municipalities of the Villip office and the municipalities of Adendorf, Arzdorf and Fritzdorf of the Meckenheim office to form the new municipality of Wachtberg by the law on the municipal reorganization of the Bonn area ( Bonn law ) Incorporation of the district of Bonn into the Siegkreis newly created Rhein-Sieg-Kreis was assigned. Prior to that, incorporation of Pech into the city of Bad Godesberg had been considered, for which the residents of the place had spoken out with a clear majority. The purchasing department of the embassy of Pakistan was in Pech around 1980 and the embassy of the Kingdom of Cambodia in the Federal Republic of Germany from 1993 until the relocation of the seat of government to Berlin in 1999 (→  list of diplomatic missions in Bonn ).

On June 4, 2016, Pech was hit by heavy flooding of the Godesberger Bach after a storm caused by heavy rain. The bridge at the Pech exit to Villip and the bridge “Grüner Weg” were destroyed.

Lived in the district of Pech (including secondary residences )

(1) June 30th of each year
Source: Statistical information in the 2008 draft budget of the municipality of Wachtberg

Jutta Danylow is the chairman of the Pech local representative and Jürgen Kleikamp is her deputy ( as of 2015 ). 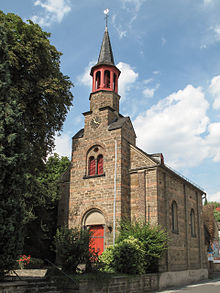 In 2014, director Christian Alvart shot scenes from his film Halbe Brüder in a villa on Huppenbergweg. In the same villa - which is vacant and is being offered for sale - Kaspar Heidelbach filmed scenes for the Cologne crime scene Bausünden in April 2017 .