The place is known for its traditional pottery ("Töpferort Adendorf").

Adendorf is located in the Voreifel southwest of Bonn, directly on the border with Rhineland-Palatinate . 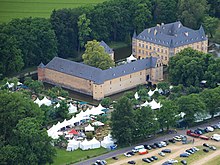 The settlement goes back to prehistoric times, on the Lößfeld between the present location Adendorf and the castle Munchausen were Neolithic tools unearthed in at least a temporary settlement suggest. In the area of ​​today's clay pit , a Roman villa rustica was found in the 20th century , of which there are no more traces today. In contrast, the ancient Trotzenburg refuge north-east of the village has been preserved as a ground monument. A moth hill on the southern edge of the village has been preserved from post-Roman times , the outer bailey of which is now the sheep farm . In Franconian times, the Cumbe farm in Adendorf belonged to the Prüm Monastery , according to written sources . The first known mention of the place name Adendorf comes from the year 893.

In 1815 the Rhineland and with it Adendorf fell to Prussia . The village was the administrative seat of mayor Adendorf in county Rheinbach in Cologne Region of the Province of Jülich-Cleves-Berg , the 1822 with the Grand Duchy of the Lower Rhine to the Rhine province was merged. The mayor's office was later moved to Meckenheim. At the census on December 1, 1912, the community of Adendorf had 838 inhabitants.

When the Rheinbach district was dissolved in 1932, Adendorf became part of the Bonn district. On August 1, 1969, the community was (by the law for local reorganization of space Bonn Bonn Act ) with the communities of the Office Villip together and communities Arzdorf and Fritzendorf the Office Meckenheim the new municipality Wachtberg, that of together with the other parts at the same time dissolved district Bonn (if not incorporated into Bonn or Wesseling) was incorporated into the Siegkreis , which has since been called Rhein-Sieg-Kreis .

The Catholic Church of St. Margareta was built in 1515, thoroughly renovated from 1770 to 1780 and extended by two yokes to the west around 1900. The church building stands as a monument under monument protection .

Adendorf Castle and Münchhausen Castle are located in Adendorf, as well as the only textile factory in the old district of Bonn-Land.

1June 30th of each year, source: Statistical information in the 2010 draft budget of the municipality of Wachtberg
2 As of September 25, 2014

Adendorf is the seat of the Adendorf Community Primary School ( Schule am Wald ). In the five classes, 115 students from the Wachtberg districts of Adendorf, Arzdorf, Fritzdorf and Klein Villip are currently being taught. The association supervised schools Rhein-Sieg e. V. offers childcare at the school as part of an open all-day school .

Chairman of the local representation in Adendorf: Volker Gütten (CDU), (as of 2016).