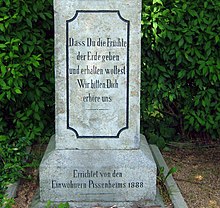 Werthhoven is a village and district of the municipality of Wachtberg in the Rhein-Sieg district in North Rhine-Westphalia , south of Bonn . It belongs to the Drachenfelser Ländchen with 7 other villages .

By the year 770 the place was called Pisinhaim what to 856 to Piscenheim and around 898 to Pissunhaim was. The later name Pissenheim is due to the Rhenish dialect . In 1934 the place was renamed Werthhoven after its oldest courtyard, the "Werther Hof", which had arisen from a Franconian estate . The former name Werthoven, which is often misunderstood and perceived as disreputable, is reflected today in the colloquial name Pössem .

On August 1, 1969, the community was Werthhoven by the Bonn-law with the other communities of the Office Villip and the communities Adendorf , Arzdorf and Fritzendorf the Office Meckenheim merged to form the new municipality Wachtberg, together with the other parts of the same resolution the district Bonn ( if not incorporated into Bonn or Wesseling ) was incorporated into the Siegkreis , which has since been called Rhein-Sieg-Kreis .

Werthhoven has 1,062 inhabitants and is therefore a medium-sized place in the thirteen villages of Wachtberg.

In Werthhoven, the St. Jakobus Chapel is a cultural monument that was first mentioned in the 9th century. The highest point in the area at 269  m above sea level is also within the boundaries of the town . NN and the radome of the Fraunhofer Institute for High Frequency Physics and Radar Technology (formerly FGAN ).

Werthhoven has its own local representative within the municipality of Wachtberg, which consists of eight members. Chairman is Paul Lägel ( SPD ), his deputy is Thomas Franz (UW).