Rudolf Augstein at the FDP federal party conference in 1980

Rudolf Karl Augstein (born November 5, 1923 in Hanover ; † November 7, 2002 in Hamburg ; pseudonyms including Moritz Pfeil or Jens Daniel ) was a German journalist , publisher , publicist and the founder of the news magazine Der Spiegel , whose editor he up to remained after his death.

Augstein was born in Hanover. His mother was Gertrude Maria Augstein and his father Friedrich Augstein , a former camera manufacturer and photo merchant ( Photo Augstein ). Rudolf grew up in a middle-class Catholic family and was the youngest of seven children (five sisters, one brother - Josef Augstein , later a lawyer in Hanover). At the age of nine he saw the National Socialists come to power . In 1933, his parents sent him across the city to the Kaiserin-Auguste-Viktoria-Gymnasium (today's Helene-Lange-Schule ) in the working-class district of Linden , as it was considered to have little Nazi influence. There he met Uri Avneri as a classmate . When the grammar school became a girls' school in 1939, he switched to the Ratsgymnasium Hannover , which he left in 1941 with the Abitur . He then completed a traineeship at Hannoversche Anzeiger , which later became the Hannoversche Allgemeine Zeitung (HAZ). From 1942 Rudolf Augstein was in military service as a gunner and radio operator, u. a. in Russian Voronezh . Towards the end of the Second World War he was promoted to lieutenant in the reserve as an artillery observer . He was awarded the Iron Cross and the Silver Wound Badge during his service . In 1955 or 1956 he joined the FDP . In 1972 he won a Bundestag mandate for the FDP, which he resigned after three months.

Founder and maker of Spiegel

Augstein 1985 in Hamburg on the occasion of a simultaneous fight by the world chess champion Garry Kasparow .

After the end of the war, Augstein was initially editor of the Hannoversche Nachrichtenblatt . In 1946 he was recruited by the British press officers John Seymour Chaloner , Harry Bohrer and Henry Ormond as editor for their weekly magazine This Week , which should be based on the model of the British News Review and the American Time magazine as a licensed newspaper . After only six issues, however, the British Foreign Office ordered its immediate suspension because of the criticism that the magazine also made of the occupying powers. Chaloner at least obtained permission to hand over the magazine to German hands. Augstein acquired the publishing license together with the photographer Roman Stempka and the editor Gerhard R. Barsch in Hanover. Augstein became editor-in-chief and publisher and on January 4, 1947 brought out the first edition of the news magazine under the new title DER SPIEGEL in the publishing house of the Anzeiger high-rise in Hanover.

In January 1949, Augstein was charged for a report in the Spiegel for the first time after the magazine had reported that meat cans had been found during a house search of the former Agriculture Minister Erich Arp in Kiel . Augstein was acquitted in court.

In 1952 an article about Herbert Blankenhorn led to the nationwide confiscation of the 28/1952 issue of “Spiegel” (which had already been delivered). In 2007 it became known that in this context in the 1950s Augstein asked constitutional lawyer Carl Schmitt , who was referred to as the "Crown Lawyer of the Third Reich" because of his commitment to National Socialism, for legal advice on a constitutional complaint and for a period of correspondence with him entertained. The proceedings ended in September 1955 with a settlement.

When Spiegel published an article entitled “Conditionally ready for defense” in issue 41/1962 which, based on confidential reports on the NATO maneuver Fallex 62 , questioned the defense concept of the Bundeswehr, the police occupied - at the instigation of Defense Minister Franz Josef Strauss  - the editorial offices on October 26, 1962 and subsequently arrested Augstein and seven other employees on suspicion of treason (see Spiegel affair ). The arrests sparked a wave of protests. After 103 days of pre- trial detention , Augstein was released in February 1963. As early as November 30, 1962, Strauss was forced to resign from the office of Defense Minister because of the affair and thereupon withdrew temporarily into Bavarian state politics. There was talk of the “beginning of the end” of the Adenauer era , who also resigned that same year. Shortly before his death, Adenauer received Augstein for a conversation.

In the 1960s, Augstein established the Rudolf Augstein Foundation , which is supposed to manage his estate and, among other things, support charitable causes.

Augstein was sentenced in 1979 in the Italian city of Olbia in Sardinia for possession of drugs (40 grams of hashish) to a prison term of 16 months on probation and a fine of 5,000 DM.

Augstein published several books. In 1972 and 1973 he sat for the FDP in the Bundestag . 1974 Augstein donated 50 percent of the company to the employees of the mirror . In 1988 he had a conversation with the then party leader of the CPSU , Mikhail Gorbachev , about his policy of perestroika .

In the fall of 1989, then Spiegel editor-in-chief Erich Böhme wrote a comment ten days before the fall of the Berlin Wall with the core sentence “I don't want to be reunited”, in which he formulated his reservations about reunification. Augstein, who was considered a fighter for reunification, made it clear in the following issue that he did not share the opinion of his editor-in-chief. In his article he stated: “ Erich Kuby recently called me a nationalist , and I am. […] However, I prefer to be called a patriot , I inherited this term in all subtlety from Carlo Schmid 40 years ago . ”In a comment in early 1990, Augstein demanded:“ Please no peace treaty ! ”And justified this with the fear that Reparation payments would be demanded in the negotiations and these in turn led to nationalist protests: “We fear the infinite duration of the conference, which should lead to a peace treaty. In fact, it would serve to put us in the dock alone - without Italy, Japan, Austria, Hungary and Romania - until we agreed to the money being pressed on all sides. What do we fear? The nationalist upsurges in our party system, against which we would be as powerless as established nations. "

In 1998 Augstein announced that he wanted to completely withdraw from the mirror in 2003 . On August 26, 2002, he wrote his last comment in the Spiegel under the title "The Preventive Warmongers" on George W. Bush's Iraq policy .

Augstein grew up Catholic, but resigned from the Catholic Church in 1968 in protest against the encyclical Humanae Vitae , did not want to belong to any church and remained a staunch atheist and sharp critic of the church throughout his life. Augstein "no longer wants to belong to a church that in the name of God forbids the pill, that polemizes against divorce and wants to influence elections through pastoral letters." He can only distrust the institution of the church, since he assumed that the damage it causes is greater than its social benefit. 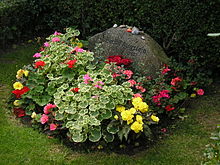 Rudolf Augstein died on November 7, 2002, two days after his 79th birthday, in Hamburg of complications from pneumonia . The funeral took place on November 19, 2002 in the cemetery of the Evangelical Lutheran Severin Church in Keitum , followed by a funeral service on November 25 in the main church of Sankt Michaelis (Hamburg) . This was sharply criticized by non-denominationalists, free thinkers and atheists and spoke of a subsequent appropriation of Augstein by the church, which would not have been in the interests of the dead.

Augstein was married five times and had three biological children and one legally recognized.

As early as the 1960s, Rudolf Augstein had the idea of ​​contributing his assets to a foundation. This is how the Rudolf Augstein Foundation was established, which is committed to helping people in sickness and need as well as journalism and art. It is a foundation whose board consists exclusively of members of the Augstein family.