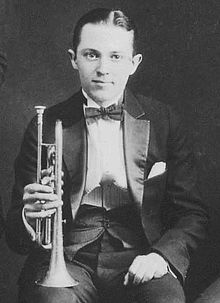 Beiderbecke came from a wealthy and musical family of Mecklenburg origin and learned to play the piano by ear at the age of four. He refused to learn notation for a long time, which often caused problems during his career because the musicians' union AFM often did not give him a work permit (Union Card) due to his lack of a "musician examination" until 1923. His interest in the cornet led him to teach himself to play this instrument through self-study. At the age of fifteen Beiderbecke played the cornet solos of Nick LaRoccas from the Original Dixieland Jass Band to a gramophone . In the same year he probably heard Louis Armstrong when he stopped at Davenport during an engagement on a Mississippi steamer.

His parents sent him to the Lake Forest Academy boarding school near Chicago for professional training , where he mainly pursued his passion for music while playing in the various jazz bands of the Chicago music scene and was therefore expelled from school in 1922. He began an unsteady life as a professional musician. 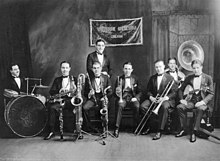 The Wolverines with Bix Beiderbecke (fourth from right)

From the end of 1923 he was the most important musician in the group The Wolverines , with whom he also made his first records. In 1925 he was a member of Charlie Straight's orchestra , but jammed with numerous jazz bands on the side. He played with Jimmie Noone , King Oliver , Louis Armstrong and Bessie Smith, among others . After a year in St. Louis with Frank Trumbauer (with whom he recorded his legendary hit “Singing the Blues”) he went to Detroit to join the first symphonic jazz orchestra conducted by Jean Goldkette . However, this orchestra had no commercial success and was disbanded in 1928. The majority of the musicians, including Beiderbecke, switched to Paul Whiteman .

At Whiteman he met the most famous white jazz musicians of his time such as Jimmy and Tommy Dorsey , Bing Crosby , Jack Teagarden and Eddie Lang . During this time Beiderbecke also recorded a number of historically significant jazz records with a small studio formation that he called Bix and his Gang . Beiderbecke was a star soloist in Whiteman's orchestra, but his options were limited within the pompous arrangements for large orchestra.

The consequences of his alcohol addiction were becoming increasingly noticeable. He fell out with increasing frequency due to illness and had to 1929 rehab undergo to which it Whiteman granted paid leave, but Beiderbecke returned not go back into the orchestra. In the following year he had a few engagements in New York jazz bands, but could not gain a foothold privately or professionally. In 1931 he fell ill with pneumonia , which led to his death.

Beiderbecke was one of the most important and influential white jazz musicians of the 1920s and one of the most important representatives of Chicago jazz . His improvisations were characterized by a mixture of lyrical phrasing and - compared to most jazz musicians of the era - a strong emotional reluctance, which made him a forerunner of cool jazz . The pure, clear tone of his cornet playing was legendary. Numerous recordings document his progressive understanding of harmony, even for a jazz musician, which reveals the influence of impressionist and contemporary musicians such as Debussy , Ravel and Stravinsky . The solo on Singing the Blues is impressive evidence of his playing . Beiderbecke also created a series of piano compositions (best known: In A Mist ) that an arranger friend wrote down for him.

Beiderbecke's cornet playing had a great influence on many jazz trumpeters . This effect can be clearly heard in Red Nichols , Bunny Berigan and Bobby Hackett . With that of more modern jazz musicians such. B. Dizzy Gillespie, who was highly esteemed by Hackett, who himself was a great admirer of Armstrong, but whose style of play is dominated by Beiderbecke influences, and this creates a stylistic connection to the lyrical, ballad-like trumpet style of Chet Baker, Miles Davis or Woodie Shaw. Although the cornet was increasingly supplanted by the trumpet in jazz in the second half of the 1920s, Beiderbecke remained loyal to his instrument, as it corresponded better to his unorthodox playing and expression. In doing so, he laid the foundation for the "survival" of the cornet as an instrument in jazz music. Beiderbecke, who learned to play cornet as an autodidact , used unusual combinations of handles for the valves. This playing technique (“false fingering”), which made up part of the peculiarity of his game due to a slightly different mood, is copied to this day. Contemporary musicians like Franz Koglmann also see Beiderbecke as a source of inspiration.

The tragic living conditions and his early death contributed to a romantic, transfigured legend that began quickly after the end of his life. Bix Beiderbecke's life story inspired the writer Dorothy Baker to write the novel Young Man With A Horn (German: 1949 as “The Jazz Trumpeter”). Another literary processing is the radio play Life and Death of the cornetist Bix Beiderbecke from North America by Ror Wolf . The most comprehensive biography appeared in 1974: "Bix - Man and Legend" by Richard M. Sudhalter and Philip R. Evans (Arlington House, New Rochelle, New York 1974, Schirmer 1975). In 1995 “Bix Beiderbecke - His life, his music, his records” by Klaus Scheuer ( ISBN 3-923657-47-1 ) was published, Beiderbecke's biography with musical analyzes and transcriptions as well as a detailed discography . Bix Beiderbecke is mentioned frequently in the work of Malcolm Lowry , who describes him as a significant influence on his prose and poetry.

Beiderbecke's record work from the shellac era is documented on Classics albums . Other outstanding albums from his discography are: