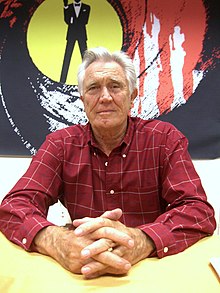 George Robert Lazenby (born September 5, 1939 in Queanbeyan , New South Wales ) is a former Australian dressman and actor . He became known as James Bond in the 1969 film On Her Majesty's Secret Service .

After George Lazenby had done military service in his native Australia, he began to work as an auto mechanic; later he switched to sales. In 1964 he moved to England to work as a model in London . By 1967 Lazenby was a successful and well paid model, he worked a. a. for Marlboro. He became known as "Big-Fry-Man" through appearances in commercials for the chocolate brand "Big Fry".

After Sean Connery left the James Bond series, producer Albert R. Broccoli was urgently looking for a new actor for the Bond character; he tested numerous actors. Lazenby bought a Rolex, went to the same tailor as Sean Connery, and bought a suit in which to apply for the role. Allegedly he bought a model that was made for Connery, but was not picked up by him. After getting his hair cut in the style of Connery, he introduced himself to Harry Saltzman , whereupon he was shortlisted for candidates. Lazenby accidentally broke the nose of a stuntman during screen tests. This impressed Broccoli and was the reason why he signed Lazenby as the new James Bond.

Already during the filming there was a slight tension, as Lazenby felt like the star of the film and wanted to be treated accordingly. However, the director took little time for him. Producer Broccoli finally made it clear to him that he would only be a star if the audience accepted him as such. Allegedly there was a conflict between the main actors Diana Rigg and George Lazenby, which was denied by the two.

In 1969, On Her Majesty's Secret Service , the only Bond film with Lazenby in the role of secret agent was released. He received a Golden Globe nomination for best young actor for his performance .

Lazenby considered the character of James Bond to be out of date and openly stated this in interviews. He had grown longer hair and had a full beard. United Artists , on the other hand, demanded that he look like James Bond in public appearances and refused to allow him to travel to the US to promote the film. Lazenby then traveled to the States at his own expense, but received little attention from the press.

While the commercial for Man Lived was only twice tailored to Sean Connery, on Her Majesty's Secret Service focused on the character of James Bond and neglected the main actor. His name was not featured prominently on the movie poster; he seemed to have the status of a supporting actor here. In retrospect, some of those involved in the production blamed this fact on the fact that George Lazenby was less well received by the audience than Sean Connery.

The production company Eon Productions Ltd. Lazenby offered a contract for five (according to other sources six) films, which he did not sign because he had problems clarifying the contractual clauses.

Although Her Majesty's Secret Service was a commercial success, it still lagged behind the box office results of its predecessors. It was decided to produce the next James Bond film, James Bond 007 - Diamond Fever with a new lead actor, John Gavin . Eventually Sean Connery was persuaded to play the role of James Bond again.

After that, Lazenby mainly starred in low budget films and Hong Kong action films, and was doing commercials again. Agent roles and Bond parodies were often cast with him; Lazenby tried to capitalize on his past as Bond. However, he was never able to assert himself as a film actor. At the beginning of the 1970s he planned a joint project with Bruce Lee , which, however, was no longer possible due to his sudden death. His better-known films include Kentucky Fried Movie and Lance - Never Die Young . He was also seen in 1993 alongside Sylvia Kristel in several television films in the Emmanuelle series.

In 2003 he temporarily said goodbye to acting, now he's back in front of the camera.

On August 23, 1973 Lazenby married his first wife; the marriage lasted 24 years. Their daughter was born on September 13; they also had a son who died of cancer in 1994.

In 2002 he married former tennis player Pam Shriver . This marriage resulted in three children, twin girls born in 2005 and a son. In August 2008, Shriver filed for divorce.