Ring Ring is the debut album of the Swedish pop group ABBA from 1973. It was initially only released in the Scandinavian countries of Sweden, Norway and Denmark under the band name "Björn Benny & Agnetha Frida". It was later released in Australia and other countries as well. It was first released on CD in the UK in 1992. With the title song Ring Ring , the group took third place in February 1973 at the Melodifestivalen , the Swedish preliminary decision for the Eurovision Song Contest .

As the first album by the then still young band, Ring Ring shows a greater stylistic variety than was the case with later ABBA albums. This was due in particular to the circumstances under which it was recorded: The joint album was just a kind of side project in the career of the four musicians, whose professional focus at that time was all elsewhere. So composed Benny Andersson and Bjorn Ulvaeus mostly pieces for other singers at Polar Music under contract, while Agnetha Faltskog and Anni-Frid Lyngstad pursued solo careers. As there was little time left for own recordings for this reason, only half of the track list consisted of songs that Ulvaeus and Andersson wrote especially for the group album.

The instrumental arrangements are mostly kept simple and consist mainly of guitar, piano / keyboard, drums, bass and in some cases a Mellotron (e.g. Another Town, Another Train ). Unlike most of the later and well-known ABBA songs , Andersson and Ulvaeus often took over the lead vocals on this album, which is also seen as one of the album's greatest weaknesses. Songs like Rock'n'Roll Band or I Saw It in the Mirror are considered the weakest contributions on the LP. On the other hand, with pieces such as Nina, Pretty Ballerina or the theme song Ring Ring , and the lead vocals of the singers in them, the group was already approaching their later sound.

Characteristic for some songs were the alternating vocal parts of the male and female half of the group, which was inspired by the British pop group Blue Mink . This characteristic was already used in People Need Love , the group's first single from spring 1972, and subsequently also in He Is Your Brother and Love Isn't Easy (But It Sure Is Hard Enough) . In addition, Fältskog received the solo part in her own composition Disillusion , while Lyngstad took it on in Me And Bobby And Bobby's Brother . The latter piece is one of the few in the group discography for which Andersson wrote the lyrics . Otherwise, most of the texts were written by Ulvaeus and partly by her manager Stig Anderson (e.g. Ring Ring in Swedish). On the album, the lyrics are mostly about young love, the desire for peaceful coexistence or the joy of dancing and music.

The first official recording session for the album took place on September 26, 1972 at the Metronome studio in Stockholm's Vasastaden district. Although the four musicians had already made joint recordings, the names of all four were also listed for the first time. At the end of August 1972, the production of a piece under the working title “The Rock'n'Roll Band” had already started, which appeared shortly afterwards as the B-side of a single by Benny Andersson and Björn Ulvaeus in Japan. This song was subsequently revised and provided with backing vocals by Agnetha Fältskog and Anni-Frid Lyngstad . Another track that was being worked on at the beginning of the sessions was “Contemplation”. It is unclear whether this piece was later pursued under a different title or whether it was discarded entirely.

In mid-October 1972 the first basic tracks of the two pieces He Is Your Brother and Nina, Pretty Ballerina were recorded. While the former produced a total of five takes , one of which later led to the final result, that take was discarded by the latter. He Is Your Brother was worked on for a few weeks . a. the baritone saxophone was recorded by Håkan Jansson at the end of October . Lyngstad later referred to the song as her favorite song from the period. As early as November 1972, the title was released as the group's second single. The B-side was Santa Rosa , which was probably recorded in March 1972 and was originally intended for another joint album by Andersson and Ulvaeus.

Work on the piece Nina, Pretty Ballerina continued in the KMH studio in Södermalm during November 1972 . The text is about a young woman who is known as the “ gray mouse ”, but who is admired as a prima ballerina on weekends . Andersson said it wasn't her best song, but it was still "a bit fun". Another Town, Another Train was recorded between November 1972 and January 1973 . This piece is considered to be one of the stronger songs on the album, although Ulvaeus was not entirely satisfied with the lyrics and the choice of title. In parallel, the two composers worked on a piece for the Swedish preliminary decision of the Eurovision Song Contest 1973 .

On January 10, 1973, the first session took place for the very song that ABBA manager Stig Anderson called “Ring-Ring”. Anderson wrote or contributed to a lot of lyrics for the group's songs at the time. Together with sound engineer Michael B. Tretow , the musicians developed a recording technique that was based on the fundamentals of the so-called Wall of Sound by Phil Spector and was first used at Ring Ring . Everyone involved was equally enthusiastic about the result. Andersson and Ulvaeus said later that year that the song was the best they had ever produced, while Tretow said he had goose bumps listening to it after it was recorded. The vocals were added at the Europa Film Studios in Bromma in mid-January 1973 , using the Swedish lyrics written by Anderson. In order to market the song internationally , an English text was written with the help of Neil Sedaka and his songwriting partner Phil Cody, who Anderson knew from the music business. Both language versions were mixed completely in the same month .

At the end of January 1973, Me and Bobby and Bobby's Brother was recorded again in the KMH studio. Since Fältskog was heavily pregnant at the time and the lead vocals were taken over by Lyngstad anyway, the former most likely did not take part in this session. On February 10, 1973, the preliminary decision for the song contest took place, in which the group with Ring Ring landed in 3rd place. Ring Ring (Bara Du Slog En Signal) was released as a single on February 14th, with the English version five days later. In both cases, no songs from the new album were used as B-sides, but largely unknown recordings from previous years. Åh, vilka tider (“ Those were the times”), which was recorded in June 1972, was released with the Swedish version and was originally intended for an Andersson Ulvaeus album as well. The English single version was She's My Kind of Girl , composed in 1969 by Andersson and Ulvaeus for a film and a hit in Japan in 1972.

The final recordings in March 1973 took place again in the Metronome studio. Since the two singles had aroused great interest in the still young Swedish band, they wanted to benefit from this wave of success and bring the group album onto the market quickly. The piece Jag är blott en man ("Ich bin nur ein Mann"), which was written in September 1972 by Andersson and Ulvaeus and recorded by the Swedish singer Jarl Kulle , was revised, rewritten and titled I Am Just a Girl newly sung by the four musicians. Another composition was Love Isn't Easy (But It Sure Is Hard Enough) , the title of which, however, was translated into English from a Swedish peculiarity and therefore doesn't make sense in English. In addition, I Saw It In The Mirror, an older song by the two composers from February 1970, was adapted and provided with backing vocals by Fältskog and Lyngstad. Fältskog also contributed a piece which was produced under the title Disillusion and which was ultimately published on the LP , although Fältskog had doubts whether her composition was good enough for it.

When the album was released in Scandinavia, the track list consisted of twelve songs. Seven of them were specially composed for this, while the remaining five consisted of the first group single People Need Love and some older and reused recordings by Andersson and Ulvaeus. In July 1973 the title track Ring Ring was recorded again in German and Spanish to increase the chances of success in these countries. The text of the German language version came from Peter Lach, the Spanish from Doris Band. Another Town, Another Train was sung for the German-speaking market under the title Wer im Wartesaal der Liebe stands and released as the B-side of the German Ring Ring single that same year. The Spanish version, on the other hand, did not appear on the ABBA Oro - Grandes Éxitos CD until 1994 . 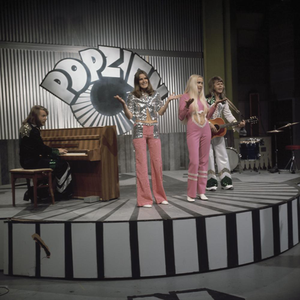 The album was released on March 26, 1973 and was limited to the Scandinavian market at that time. The two Ring Ring singles in Swedish and English had already hit the charts , so it was hoped that the LP could also benefit from them. Only a week later, Ring Ring entered the Swedish sales charts, in which singles and albums were listed at the time, and came up to number 2. Together with the two singles, it took the first three places for two weeks in April 1973. It was sold over 100,000 times, which was a great success for Swedish standards at the time.

In April 1973 it reached number 10 in Norway. In 1975 Ring Ring was also released in Australia and New Zealand by the RCA label . In Australia it stayed in the album charts for over 30 weeks and reached its highest position in May 1976 at number 10. More than 140,000 copies were sold in Australia during Abbamania . It ranked 32nd in New Zealand.

In addition to well-known titles such as He Is Your Brother and the title track, the new edition with People Need Love also includes the band's first recording. The “Deluxe Edition” from Ring Ring documents the group's first steps. The original album has been expanded to include 13 bonus tracks, including four songs that have never been released on CD before. There is also a DVD with rare TV recordings.