The title of this article is ambiguous. Further meanings are listed under Oud (disambiguation) .

The Oud or Ud , also used in the masculine ( Arabic عود, DMG ʿūd , masculine. so called , with article: Arabic العود, DMG al-ʿūd ), is a short-necked lute belonging to the bowl-necked lute from the Middle East . As a precursor to the European lute which probably originally came in Persia -based instrument with the Arab expansion in the 7th to 9th century and the Moors in Andalusia as well as on returning Crusaders to Europe . Also kink necked lutes in Transcaucasia go back to the Oud. Oud means "wood"; Recently, however, an etymology about Persian rud , "string instrument", has also been suggested. In Iranian music today , the Arabic lute is also known as the Persian playing traditionبربط/ barbaṭ .

The Arabic lute is considered the most flexible and dynamic of the Middle Eastern stringed instruments. Today it is also a common instrument in folk music. The great variety of playing styles and moods also made it an important instrument in court music. It has been referred to as the “Prince of Musical Instruments” and has become a popular subject of systematic music theory treatises, which has made it ubiquitous in Arabic musical culture . 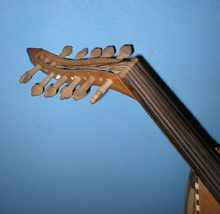 Pegbox of an oud

The origin of the Arabic sounds has not been conclusively clarified. The Arabs probably took over the thick-bellied shape of the Persian lute barbat with a wooden ceiling and replaced it with an older pear-shaped instrument such as the Turkish lute Kopuz or the skin-covered Yemeni qanbus . String instruments similar to the lute, however, already existed among the Sumerians , the Babylonians and in ancient Egypt and were apparently already in use in pre-Islamic Arabia. Medieval Muslim scholars such as al-Masʿūdī or al-Fārābī , who described the oud in detail in a treatise on music theory in the 10th century, either saw the origins of the oud in Greek culture or ascribed its invention to the Biblical Lamech . According to the myth, he hung the body of his deceased son on a tree in his grief and was inspired by the skeletal shape to design the instrument.

The oldest illustration of an oud can be found on an ivory vessel from Córdoba dated to the year 868. In Arabic music, the oud was first used in impromptu recite invented songs. The structure and shape of the instrument have been subject to constant change over the centuries: While the older lutes resembled the shape of an almond and were generally made from one piece, later instruments took on a more rounded shape and were composed of several parts; in particular, they then often had a separate neck. And while a building instruction from the 11th century prepared by a leading musician at the Fatimid court recommended that only one type of wood should be used for the production, namely that of the cypress , Guillaume-André Villoteau's was in the Description de l'Egypte described oud made from a total of nine different types of wood.

In the Middle Ages the oud found its way to Europe on the one hand via Spain in the west and on the other hand through returning crusaders via Byzantium in the east. Troubadours , trouveres and traveling musicians accompanied their singing with the instrument. In the 16th century the popularity of the lute reached its peak in Europe. The names given to the instrument in various European languages ​​- German lute , Portuguese alaude , Spanish laud , French luth , Italian liuto or English lute  - can all be derived from the Arabic word al-Oud .

The potbellied, half-pear-shaped shell body has been made up of several wood chips since the 9th century at the latest. The ceiling has a rosette- like , arabesque carving sound hole. The peg holder, which is bent backwards, is located on the neck.

In contrast to the European lute, today's oud has no frets and usually had four strings from the 7th to the 9th century. The famous musician and music theorist Ziryab added a fifth string. Today the oud is strung with two choirs (usually with six pairs of strings or five choirs and a single string), modern strings are usually made of nylon silk (based on the model of the concert guitar ) , with the bass strings with metal wire - for example made of silver , copper or various Alloys - are braided. Before the advent of modern methods of factory-made string production, a wide variety of materials were used for this purpose, depending on the era and regional conditions, such as natural gut , silk , animal tendons , leather and various natural fibers. 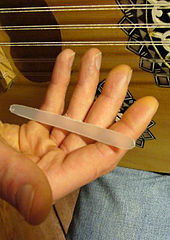 Position of the risha in the palm of the hand

Similar to most of the instruments in the lute family (which include such diverse representatives as the mandolin and the sitar ), the oud player generates the tone by plucking the strings with the help of an opening pick . The Arabic technical term for the oud pick is rischa , originally made from the keel of an eagle feather . This manufacturing method has become rare nowadays; instead, similarly shaped, elongated pieces of plastic are mostly used. The rischa is held in the palm of the hand, which makes the plucking technique of the oud relatively difficult to learn; In addition, the response of the double-choir oud strings is less easy to control than individual strings.

The unconditional rhythmic security even in the fastest, often asymmetrically accented tone sequences (complex rhythmic patterns are typical in traditional Arabic music) is therefore a special characteristic of the virtuoso.

There is no generally accepted mood of the oud, in particular there are striking differences between the Arabic and Turkish musical traditions. In a very general way, it can be said that the former tends towards a more sonorous sound ideal that tunes the strings comparatively low, while the latter prefers higher tunings and a more brilliant instrumental sound resulting from it. Certain instrument-making peculiarities of both musical cultures also take these aesthetic standards into account. There are also countless exceptions to the tuning in fourths (which is theoretically regarded as the normal case) . Certain moods are considered to be characteristic of certain musicians, families of musicians or regions, and the character of a piece or the maqām ( mode ) in which it is written can often suggest the use of scordatura . The oud virtuosos of the 20th century developed very complicated tuning systems in which the “outer” strings , that is, strung on both sides to the edge of the fingerboard, serve as bass and the inner strings are used for playing melodies.

Developments in the 20th Century

Rabih Abou-Khalil and Anouar Brahem are among the virtuosos on this oriental instrument, also known in Central Europe . Another important innovator in the 20th century was Munir Bashir , who, like the aforementioned, recorded a large part of his record work in Europe. The first musician who experimented with the oud in a jazz context was Ahmed Abdul-Malik , who first became known as a double bass player in the mid-1950s . The urban Sudanese oud style, which was first created in Khartoum after the Second World War and from which Abdul-Malik originally comes, has gained some popularity in Europe and North America since the 1970s through several commercially quite successful records by Hamza El Din .