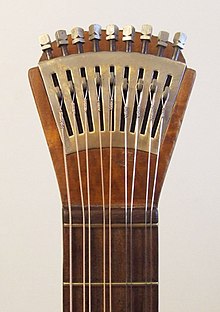 With string instruments , string choir (often just called choir ; English course ) refers to two or more strings that belong together, which are tuned to the same tone ( unison or octave spacing ) and are perceived as a unit when playing.

Chörig refers to an instrument equipped with such choirs. While “double-choir” describes an instrument whose choirs are designed for two strings , “four-choir” can refer to both four-stringed choirs and an instrument with four choirs.

Choirs is the colloquially common plural; The plural choir can be found throughout the specialist literature on piano making, for example .

Choir plucked instruments are z. B. baroque guitar , bouzouki , cister , lute , oud , mandolin , twelve-string guitar . The two (or more) strings that make up a choir are gripped together and struck together.

The strings of the dulcimer struck with a clapper are also multi-choir.

In the case of pianos and hammer pianos , the cover is only designed as a single-choir in the bass area. Above this, the reference is double-course, in the treble it is always three-course, rarely - in experimental constructions - also four-course. The strings within a choir are always tuned to the same frequency. An exception is the aliquot grand piano , in which the fourth string, which only resonates, sounds an octave higher. On the modern grand piano, the left pedal moves the mechanism to the left so that the hammers only strike one string each ("una corda game"); this decreases the volume and changes the timbre.

Clavichords were / are almost always strung with two choirs. Here, too, the ideal is / was the tuning on the same frequency, but minimal detunings against each other were / are considered to stimulate the sound. With the clavichord, both strings of a choir are always struck.