Sitar ( Hindi sitār , from Persian setār , East Persian-Indopersian pronunciation: sitār , "three strings", in German "the sitar", more rarely "the sitar") is a plucked long-necked lute in India . It is the most famous melody instrument of classical North Indian music and has a characteristic sound rich in overtones.

The musical instrument originally comes from the Persian culture, it is said to have been invented by Amir Chosrau in the 13th century . The current shape emerged around the 17th century. It differs significantly from the Persian sounds Setar and Tar .

The sitar consists of a dried bottle gourd ( calabash ) as a resonance body with a wooden ceiling and a long, hollow neck on which there are sliding brass frets .

The sitar today usually has between 18 and 20 strings. Four playing strings and three drone strings (chikari), which are tuned to the root and fifth of the scale and used for rhythmic accents, run above the curved frets. Up to 13 sympathetic strings run below the frets. These are tuned to the scale tones of the raga played , amplify the sound of the overtones and amplify the "singing" sound of the sitar. The bridge (Jovari) has a special curved shape, so that the strings are only partially in contact and thus produce the peculiar sound. The keynote in the diatonic tuning of the sitar can be selected individually - depending on the ideal sound - and is usually between C and D. Some models have a screw-on second body just before the headstock (tumba), which mainly reproduces the lower frequencies.

Drawing of the playing stance

The player, called Sitarji , sits in the classic posture with his legs crossed on the floor. The instrument rests on the player's right side on his left foot and is held diagonally in front of the body with the right forearm, which rests on the sound box. The left hand grips the strings behind the frets. By twisting the string sideways, the pitch can be raised by up to a sixth and a glissando (meend) can be generated.

The strings are struck with a wire plectrum (mizrab) which is placed on the index finger of the right hand. For special effects, the lower strings can also be struck directly with a long fingernail. 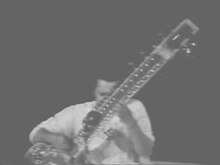 The sitar is the best known and most widely used instrument in classical North Indian music and is relatively difficult to play compared to western plucked instruments. The Indian string instruments vina and sarangi , however, place significantly higher demands on the player. The sitar is usually accompanied by tabla and tanpura .

Important sitar players of the second half of the 19th century were Imdad Khan (1848–1920), his son Enayat Khan (1859–1938) and Ramprasanna Banerjee (1870–1928). Gokul Nag (1908–1983, student of Ramprasanna) and Mushtaq Ali Khan (1911–1989) were born at the beginning of the 20th century. The sitar players Nikhil Banerjee (1931–1986), Imrat Khan (1935–2018, grandson of Imdad Khan) and Ravi Shankar (1920–2012) gained international fame . Shankar gained fame outside of India , primarily through the Beatles and his collaboration with violinist Yehudi Menuhin . In India, the virtuoso Vilayat Khan enjoys great popularity, who, like his family, learned the style of Imdakhani Gharana . He developed a quick and easy game and changed the sitar according to his ideas (only two playing strings, four chikari strings, eleven sympathetic strings). Many Indians consider him to be the best Sitarji of his time. Mohammad Sharif Khan Punchwale (1926–1980), whose father was court musician to the Prince of Punch , lived in Lahore and was considered the leading sitar player in independent Pakistan. The next generation of sitar players like Budhaditya Mukherjee , Shujaat Khan (Vilayat Khan's son) and Irshat Khan (Imrat Khan's son) seamlessly build on their great role models. In Germany, the Dhrupad- style trained subroto Roy Chowdhury (1943-2017) appeared regularly from the 1970s .

At the end of the 1960s, the sitar entered jazz ; initially by Indian musicians such as Ravi Shankar, who opened up western popular and classical music in his compositions and at the same time ensured that the modal scales of the Indian ragas meet the jazz harmonic . A little later, jazz musicians began to add the sounds of the sitar , which is only used monophonically in India , as an exotic addition to the polyphonic jazz orchestra. In the successor to Ravi Shankar, the Indian sitar player Nishat Khan (* 1965) stands for an East-West interplay in the field of jazz. The most famous sitar player who came from jazz was Collin Walcott until his death in 1984 . Since Walcott's death, the sitar has rarely been used in jazz. In Germany, the jazz guitarist Volker Kriegel occasionally switched to the sitar.

From the 1960s onwards, the sitar and Indian music in general influenced western beat and rock music. In July 1965, accompanied Jon Mark for his recording of the folk classic Sally Free and Easy with a sitar, but since the by Shel Talmy produced album was not published until 2017, remained marrow uptake fifty years hidden, despite Ray Davies of the Kinks to who inspired the imitation of the sitar sound image by See My friends . George Harrison , guitarist for the Beatles , learned the sitar and used it to decorate songs like Norwegian Wood or record completely Indian tracks like Within You Without You on the album Sgt. Pepper's Lonely Hearts Club Band . Brian Jones played sitar at the Rolling Stones , such as Paint It Black and Street Fighting Man . Even Steve Marriott and Peter Frampton played in the band Humble Pie , among other sitar.

Anoushka Shankar (* 1981, daughter of Ravi Shankar) is successful in the United States and Europe . In addition to classical Indian music tailored to a Western audience, there are recordings with classical, flamenco, pop and rock musicians.

The Electric Sitar has been built since the 1960s , a 6-string electric guitar that produces a sitar-like buzzing sound with a beveled bridge and sympathetic strings, but does not have the fullness and ornamental abilities of a real sitar. Since it is a guitar with a chromatic tuning and any guitarist can easily play it, it is often used by jazz and rock musicians to imitate the Indian sound of the sitar. Max Cavalera achieved a high reputation with this instrument in the metal scene with his bands Soulfly and Sepultura . But also bands like Rage , Metallica , Yes , Genesis , Asian Dub Foundation and many others try to copy the uniquely rasping sound of the sitar with the sitar guitar or even just an electronic sitar guru effect device and to enrich their music with it. The jazz guitarists who have developed the sound of the electric sitar into their own trademark are Pat Metheny and Torsten de Winkel from Frankfurt am Main .