This article deals with the folk music genre bluegrass. For other meanings, see blue grass . 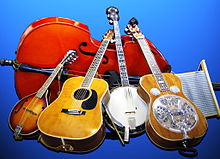 Instruments of the bluegrass

Bluegrass is one of the most important American folk music styles and belongs to the broad genre of country music . Today's typical instrumentation consists mainly of banjo , fiddle , mandolin , guitar , resonator guitar and double bass . The mandolin and guitar replace the drums and generate percussive chop hits on the offbeat . The harmonies in the songs are mostly closely in third - and fifth - harmonies out. The verse is sung and the solo instrument played alternately. If the mandolin is playing a solo, the fiddle or banjo takes over the task of chopping.

The bluegrass originated between 1937 and 1945 in the mountains of Kentucky and Tennessee . At this time, mandolin player Bill Monroe was experimenting with hillbilly and fiddle pieces, Anglo-American ballads, Afro-American dance music, and traditional gospel harmony singing. He created a form of country music enriched with swing and blues elements .

Towards the end of this phase, he hired the young banjo player Earl Scruggs , who had perfected the three-finger style of his home state North Carolina with great speed and precision, thereby dynamising the band's sound considerably. The band was called "Bill Monroe and his Blue Grass Boys" as a throwback to the "Bluegrass State" Kentucky. The term Bluegrass refers to the blue-green due to the nutrient-rich soil leaves the meadow bluegrass and the music style was named by the media it later.

The Blue Grass Boys became better known through their appearances on the widely audible, weekly radio show Grand Ole Opry from Tennessee's capital Nashville , of which Bill Monroe was a member from 1939 until his death in 1996. Her early repertoire included the Muleskinner blues and the Blue Moon of Kentucky, later covered by Elvis Presley . With Monroe's guitarist Lester Flatt , Earl Scruggs founded the Foggy Mountain Boys in 1948 , which, in addition to the then unrivaled banjo innovations, also reached a broader audience and the television audience with original lyrics and later with the Dobro as the lead instrument.

Other bluegrass musicians who shaped the style of the early years were the banjo player Don Reno and the brothers Carter and Ralph Stanley , Bobby and Sonny Osborne, Jim and Jesse McReynolds and bands like Hylo Brown and the Timberliners.

The role of the five-string banjo in bluegrass

The 5-string banjo is the indispensable instrument in all bluegrass bands. While most banjo players play in Scruggs style, in which melody tones are embedded in fill tones predominantly taken from the background chord, the so-called Melodic Style was developed independently by Bill Keith and Bobby Thompson in the 1960s, in which all tones played have melody tones or intermediate tones the melody tones are. The most famous musician of this style today is Béla Fleck .

In the late 1950s and early 1960s there were more and more appearances by bluegrass bands at universities and at folk festivals such as the one in Newport , Rhode Island. Through these contacts of the more commercial and southern-style hillbillys with a cultural music scene previously supported by Alan Lomax , Charles Seeger or his sons Mike and Pete Seeger , bluegrass not only gained a nationwide market base, there was also an influx of innovative younger musicians such as Byron Berline , Bill Keith , Peter Rowan , Clarence White , Tony Rice and David Grisman .

Since the late 1960s, other musicians such as the Grateful Dead have also taken up the bluegrass. This created new styles such as Newgrass and Jazzgrass. Also, country-rock -Bands like the Eagles or Poco stylistic device of Bluegrass in her pieces used. At the beginning of the 1980s, bluegrass found its way back into commercial country music in a more poppy version and sometimes also with drum background, when so-called neo-traditionalism gained influence.

Bluegrass became popular again in the early 1990s. The International Bluegrass Music Hall of Fame has existed since 1991 , which is operated by the International Bluegrass Music Association and annually awards style-defining artists with the admission. Since the turn of the century, new bluegrass bands such as the Infamous Stringdusters emerged , who also combine old-time and Americana in their music. In the late 1990s, Dolly Parton increasingly turned to the bluegrass; The Dixie Chicks also had strong bluegrass influences in their music at times, as did Alison Krauss and Rhonda Vincent . The music can now be heard around the world via internet radio stations such as Bluegrasscountry.org.

Other important contemporary musicians of the genre (reference CD in brackets):