The laurel plants (Lauraceae) are a family of flowering plants (Magnoliopsida). The approximately 50  genera with 2000 to 2500 species thrive mainly in tropical areas. Almost all species are woody plants and grow as trees or shrubs ; with the Cassytha there is also a genus of parasitic climbing plants within the family. Cinnamon and bay leaf , which are used as spices due to their aromatic ingredients , are of particular importance to humans . 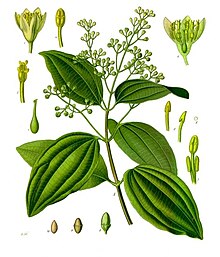 Bay plants are mostly evergreen, rarely deciduous, woody plants and grow as trees or shrubs, the only exception is the genus Cassytha , whose species are hemiparasitic , twisting perennial herbaceous plants . The smallest shrub-like species hardly reach heights of 1 meter, under the trees there are species with heights of up to 50 meters. Some species grow easily by climbing, so they need to be supported by neighboring plants. In many species, all parts of the plant smell aromatic.

The trees usually have smooth bark , which is often covered with a large number of round, flat cork pores , but very cracked bark can also occur. The wood can be very light to extremely strong, the relative density is usually between 0.4 and 0.8 g / cm 3 , but can also reach 0.2 g / cm 3 to 1.3 g / cm 3 . Buttress roots are often found within the family, but strong buttress roots are the exception. Respiratory roots and stilt roots are also rare .

The usually alternate, rarely opposite or seemingly in whorls arranged leaves are usually divided into petiole and leaf blade. The leaf blades are usually simple, entire and often leathery. The upper side of the leaf is usually dark green and shiny, the underside of the leaf is often blue-green. Size and shape are very variable within the family, the smallest are only about 1 cm long, the longest reach more than 60 cm in length; the shape ranges from circular to ribbon-shaped. Differing are the scaly leaves in the genus Cassytha and lobed leaves, which occur in the genus Sassafras , in young leaves also in the genus Actinodaphne and in two species from the genus Lindera . The hair consists exclusively of single-celled trichomes , which can appear somewhat chambered. They vary in size, shape, orientation and density, but can also be almost completely absent. Usually the hair is thicker on the top than on the underside. The veins are usually pinnate, but many genera also have leaves with three main veins. On the underside, domatia are occasionally found in the armpits of the veins . Stipules are not developed within the family.

The flowers can be hermaphroditic or unisexual. If the flowers are unisexual, the species can be dioecious , polygamomonoecan, or monoecious . Single-sex flowers occur in the genera Actinodaphne , Endlicheria , Lindera , Neolitsea and Rhodostemonodaphne .

The relatively small flowers are usually 2 to 8 mm in diameter and 1 to 20 mm with radial symmetry . The flower base standing free from the carpel can be more or less high, cup-shaped, small or significantly enlarged and urn-shaped.

The flowers are usually threefold. Two-fold flowers occur in the genera of laurels ( Laurus ), in Neolitsea and Potameia , in the genus Endiandra in Endiandra xanthocarpa and occasionally in Cinnadenia ; four-fold or irregular flowers are in the genus Chlorocardium .

In most cases, the bloom consists of two circles of the same or sometimes differently shaped bloom . Occasionally the bracts of the outer circle are ½ to ¼ smaller than those of the inner circle. In contrast to this, the genera Dicypellium and Phyllostemonodaphne have three and Eusideroxylon four circles of bracts, of which the inner circles represent transformed stamen circles. In the genera Litsea and Lindera , parts of the inflorescence can be converted into stamens, so that the bloom bracts can be completely missing. The colors of the bracts range from mostly greenish, yellowish, whitish to white or rarely reddish. The bracts are erect, spread out or bent back; they are seldom bent inwards.

The stamens are originally in four circles of three pieces each, of which the innermost circle is usually sterile or may be missing. Occasionally one or two of the remaining three stamen circles are sterile or absent. In some genera the number of stamens is higher, for example in Actinodaphne (up to 15), Chlorocardium (up to 20), Cinnadenia (up to 32), Dodecadenia (up to 18), in the laurels ( Laurus ) (up to 30 ), in the genus Lindera (up to 15) and Litsea (up to 20). At the base of the stamens of the inner existing circle there is often a pair of glands. The anthers have two or four chambers and usually open via flaps from the base to the tip. Usually the anthers of the two outer circles are turned inwards, while the third circle can also be turned outwards. In some species of the genus Potameia and rarely in the genera Endiandra and Beilschmiedia , the anthers are unicameral due to the intergrowth of the pollen sacs. The pollen grains are more or less spherical and usually have a diameter of 18 to 40 µm, more rarely 14 to 70 µm. The pollen grain surface is mostly covered with 0.5 to 2 (rarely up to 3) µm high spines.

There is only one carpel , which is mostly on top, exceptions are the genera Hypodaphnis in which it is inferior and Eusideroxylon and Potoxylon in which it is semi-inferior. The single carpel contains a single, anatrophic ovule . The scar is three-lobed, disc-shaped or kidney-shaped. 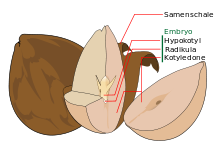 Structure of a seed of the avocado ( Persea americana )

Berries are usually formed as fruits , which contain a single, large seed . Stone fruits with a weak endocarp are also rare . The shape of the fruit varies from indented spherical to club-shaped or almost spindle-shaped, but mostly they are elliptoid. The fruits are mostly fleshy or rarely woody. The smallest fruits are only about 5 mm long, the largest are found in the cultivated avocado ( Persea americana ) with a length of over 15 cm. The flower base and the flower stalk can either be barely enlarged or significantly enlarged on the fruit. Then they often form a fleshy or woody fruit cup around the lower part of the fruit, reminiscent of acorns . The surface of the fruits ( exocarp ) is usually shiny black or dark to brownish purple, occasionally it is covered by a bluish layer of wax; Other fruit colors such as red, light brown, green, yellow or white are also rare.

The seed coat (testa) is thin and there is no endosperm . The embryo is fully developed, straight and has very large cotyledons .

The most economically important species today is the avocado ( Persea americana ). Their fruit is mainly used as a salad fruit. The oil obtained from the fruit and seeds is mainly used in the cosmetics industry.

Many representatives of the laurel family are used as a spice due to their aromatic scent. Above all, cinnamon , which is obtained from the bark of young branches of the Ceylon cinnamon tree ( Cinnamomum verum ), has a special meaning. The bark of closely related species is often used, but these are often of poor quality. The cinnamon cassia ( Cinnamomum cassia ), for example, provides a less intensely smelling bark.

The use of the leaves of the real laurel has been known from the Mediterranean region since ancient times. Recipes from the cookbook by Marcus Gavius ​​Apicius already demonstrate its use. In the traditions of Greek mythology , Daphne turns into a laurel tree in order to hide from her admirer Apollon , who in turn wore wreaths of laurel leaves out of mourning. Bay leaves were also used in Greece to honor Olympians , in the Roman Empire victorious generals were honored with laurel wreaths.

Other plants used as spices include the sassafras tree ( Sassafras albidum ) and Litsea glaucens , Cinnamomum tamala . Some species that have never been cultivated are threatened because of their extensive use as spices, such as Dicypellium caryophyllaceum .

For perfumery , aromatic oils are obtained from some species, such as rosewood oil from Aniba rosaeodora or the Brazilian sassafras oil from Ocotea odifera . Consisting of the camphor tree ( Cinnamomum camphora obtained) camphor is used in the pharmaceutical industry used, and there is a plurality of possibilities of use of different kinds from the folk medicine .

The Lauraceae family has a pantropical distribution, some species range in the north and south into temperate areas. The northernmost distribution in the Old World has the genus Lindera , which extends to the Japanese island of Hokkaidō , the southernmost Old World representatives are three species of the genus Beilschmiedia in New Zealand . In the New World ranging Sassafras albidum up to Maine and to the south of Ontario , in the south limited Persea lingue on the Chilean island of Chiloé the distribution area. The main distribution areas of the family are in the Indo - Malay areas and in Central and South America . In Tropical Africa, on the other hand, there are relatively few species. There are 27 genera in the Neotropic .

Species of the Lauraceae family occur in tropical mountain forests at altitudes of up to about 4000 meters and are often the most common family in cloud and cloud forests above 2000 meters. However, the absolute number of species is highest in rainforests at lower altitudes. Although the family distribution is decreasing in arid areas, some species have adapted to semi-arid locations. Other species also grow in other extreme locations, such as temporarily flooded forests or almost nutrient-free soil made of white sand.

The Lauraceae family is placed in the order of the laurel-like (Laurales) and is there the family with the highest number of species. Molecular biological studies showed that the family, together with the Hernandiaceae and the Monimiaceae, form a monophyletic clade; the relationships between the three families have not yet been precisely established. 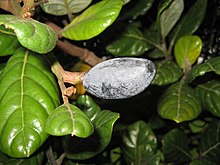 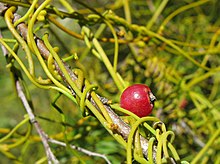 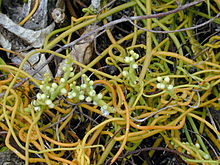 This family was established in 1789 by Antoine Laurent de Jussieu under the name "Lauri" in Genera Plantarum , p. 80. Synonyms for Lauraceae Juss. are: Cassythaceae Bartl. ex Lindl. and Perseaceae Horan. ; these were independent families with only one genus Cassytha or Persea .

There are around 45 to 57 genera in the laurel family (Lauraceae) and around 2000 to 2500 species (species numbers and distribution areas of the genera come from Rohwer 1990 and require an update, except for the genera that are specially marked and, for example, from the flora of China 2008 or Quinet 2005):