In the manufacture of sugar (from plants is high in sugar beet , sugar cane ) the sugar is extracted , and in various shapes and material purities produced consuming capable.

Sugar beet before and after washing, next to it the further usable beet washing soil

Then the raw juice is leached out by hot water in the extraction tower with the help of the countercurrent process , using the diffusion process , and 99% of the sucrose is dissolved out. The resulting black-blue raw juice with around 14% raw sugar contains many other organic and inorganic substances that have to be removed before the crystallization process. This is done by stirring in milk of lime , which neutralizes acids and raises the pH value to around 11 in order to prevent invert sugar formation (breakdown of sucrose into fructose and glucose ). About 35% of the contaminants can be removed, e.g. B. fall out many metal ions as poorly soluble metal hydroxides. The milk of lime required for the burnt lime is directly in factories burned , because the resulting carbon dioxide is needed to the remaining calcium ions to calcium carbonate (lime) to bind, although other impurities are mitgebunden. The lime is separated from the thin juice in candle filters and filter presses . The resulting lime is mostly given to the surrounding farmers, who apply it as carbolime to the fields to adjust the pH value of the soil.

The by-product of the diffusion process is the leached pulp, which is mechanically pressed in pulp presses to approx. 30–34% dry matter. The press water is pumped back into the extraction tower, the chips are thermally dried to over 90% dry matter and then pressed into pellets with the addition of molasses . These pellets are sold as fodder .

Subsequently, from the thick juice (sugar content 65-80%) is by repeated crystallization at elevated temperature and under pressure of sugar recovered. As an intermediate product, the magma is created as a mixture of syrup and granulated sugar.

During the crystallization, a crystal suspension is created in the “cooking apparatus”. The cooking devices are heated with vapors from the evaporation station and are under vacuum to ensure energy-saving evaporation of the water at low temperatures. The crystal suspension from the cooking apparatus contains about 50% of sugar crystals and, in particular, fully automatic centrifuge from the mother liquor separated, washed in the centrifuge, and then dried. The grain size of the crystals can be influenced. After drying, the refined sugar is in most cases stored in an air-conditioned silo until it is dispatched.

In the past, the sugar was packed in sacks immediately after crystallization and stored in warehouses. In many factories in developing countries this is still done today. Brown raw sugar is a less pure form of sugar; it is colored brown due to the non-sugar substances that are still present.

The by-product is molasses with a sugar content of around 50 percent, from which sugar can no longer be crystallized, as there is no longer any supersaturation . The molasses is used in yeast production , in the food industry , in the pharmaceutical industry and in rum production . In addition, molasses is used as a "pressing additive with nutrient content" in animal feed production.

The molasses is processed further to improve the yield during crystallization. One of the most economical processes for this is the Quentin process . The molasses is treated with a cation exchanger that is loaded with magnesium ions. The sodium and potassium salts of molasses are converted into magnesium salts by salting . This increases the rate of crystallization and thus the sucrose yield. 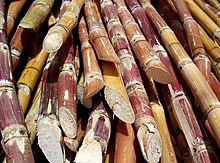 Sugar cane transport to the factory by truck

The harvested sugar cane is cut in the factory or at the time of harvest. In most factories, the cane is processed in sugar cane mills. In the mills, the juice is pressed out of the sugar cane (“press extraction”), and the bagasse is the residual material . In some factories, however, diffusers are already in use, which extract the sugar using the diffusion process. The juice obtained is passed into settlers. There suspended solids are removed from the juice by gravity. This simple type of juice purification results in cane sugar often being brown.

From a travel report by the missionary doctor Dan Beach Bradley around 1840 we learn about sugar production in Siam near what was then Nakhon Chaisi :

After juice cleaning, production from sugar cane is essentially the same as in beet sugar production. 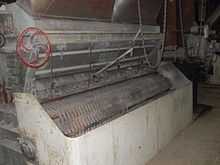 Beet sugar factories usually use combined heat and power . Water is evaporated in steam boilers using fossil fuels such as lignite , hard coal , natural gas or heating oil . The water vapor generated is passed through a turbine to which an electrical generator is connected. The electricity generated is used for the electric motors in the factory , e.g. B. on pumps, centrifuges , etc.

Bagasse, i. H. the fibrous part of sugar cane, used as fuel. The other possibilities of using bagasse are limited (e.g. for the production of chipboard). The factories are increasingly using excess bagasse to generate electricity for the public grid.

Automation in the sugar industry

As in many other industries, automation has also been strongly advanced in sugar manufacturing over the past few decades. The production process is generally controlled centrally by process control systems that control most of the machines and plant components directly. Only for certain special machines such as B. the centrifuges are used for safety reasons programmable logic controllers .

Steam engine in a sugar factory in Matanzas

In newly industrialising countries, sugar is often still produced using steam drive technology from the early 20th century. On the main island of Indonesia, Java , in the regions of Central Java, Central Java and East Java, around 50 sugar factories are still in operation, some of which are over 100 years old. Such old sugar factories are still in operation on the Caribbean island of Cuba , but they are also somewhat larger.

Sugar from sugar beet was first produced in 1802 by the German natural scientist Franz Karl Achard in a (pre) industrial process . By the continental blockade of Napoleon in the early 19th century, the import of sugar to Western and Central Europe has been denied. The industrial production of sugar from sugar beet was now of great importance to compensate for this loss of imports. This greatly accelerated the introduction of this new process in practice. In 1813, for example, 23 companies on the left Lower Rhine were already producing beet sugar.

Sugar factories used to pollute the waters with large amounts of organic material due to insufficient treatment of the wastewater . However, it is precisely the efforts to use the available sugar beet quantities more and more efficiently that ever greater proportions of the sugar constituents contained in the water quantities used can still be used; at the same time, the use of fresh water in modern systems is progressively reduced, for reasons of cost which also leads to a reduction in the amount of waste water.

However, the problem persists in locations in less developed countries when less attention is paid to environmental protection and the cost of water and materials.

Because of their energy requirements, beet sugar factories operate their own power plants, especially when using lignite and hard coal a contribution to climate change is made here. Cane sugar can be extracted without the use of fossil fuels, with the remains of the sugar cane as an energy source.