This article treats the silo as storage; for further meanings, see Silo (disambiguation) . 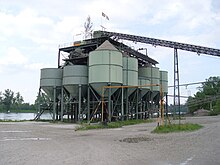 Silos in a gravel works on the Rhine near stone walls 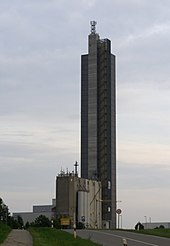 115 m high grain silo of the Schapfenmühle in Ulm 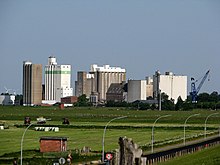 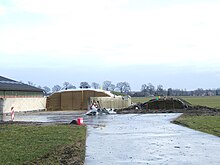 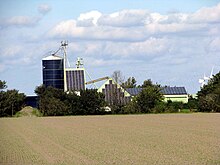 A silo (the or that, from Spanish: silo) or high silo is a large storage facility for bulk goods . Silos are used to store cement , limestone powder , plastic granules , grain , animal feed and the like.

Silos are generally filled from above and emptied from below. Nevertheless, they do not work according to the first-in-first-out method. Rather, when tapping, a funnel is formed through the outlet nozzle at the bottom, into which goods from the different filling layers run and emerge again as a mixture of quantities of goods filled into the silo earlier and later. The product tapped through the outlet connection is therefore a mixture of the quantities supplied over time.

For this reason, in the event of an incorrect filling of the silo, it is essential to avoid tapping from below without thinking, assuming that the incorrectly filled product will remain on top of the previously correctly loaded product and will only emerge afterwards. In such a case it makes sense to try to get the wrongly loaded product out of the silo from above using a suction device or similar. In the commercial sector, an average commissioner with appropriate specialist knowledge is often called in in such a situation .

Depending on the material, a pusher is sufficient for removal or, if gravity is not sufficient to get the material to flow, a mechanical conveyor device such as a screw conveyor .

The pressure conditions in a silo with bulk material favor a relatively light construction compared to a tank of the same height for liquids. While the horizontal (hydrostatic) pressure on the side walls in a tank increases linearly with height from top to bottom, the increase in this pressure component in the bulk material silo is much slower, namely only proportional to the logarithm of the height. The exact calculation of the pressure when the stored goods are at rest is possible using the Janssen equation . The forces occurring during emptying represent a problem, as these are not taken into account by Janssen and can lead to damage to the silo. Experiments in bulk solids, such as shear tests on the bulk solids to be stored , are therefore inevitable.

If bulk material expands more thermally than the silo wall, there is a significant additional horizontal load, because bulk material cannot rise to the top without friction like liquid. If water penetrates a silo - for example through rain - and if dry grain swells as a result, great horizontal forces can also act on the wall. If cement powder is stored and water penetrates, it solidifies the cement powder with a contraction in volume, but the hardened cement can then only be drilled out and chiselled out with great difficulty. Gypsum binds with water and expands, which can blow up any silo. If sugar or salt is stuck in a damp silo, these water-soluble substances can be leached out by rinsing with water.

Pest infestation is possible with food in silos. A protective gas such as nitrogen prevents insects from growing. Insecticidal gases can also be introduced if a cell is infected by pests. Alternatively, heating by introducing or circulating hot gas is possible. The simultaneous removal of bulk material promotes better penetration of gases into the bulk material.

If a cavity forms in the bulk material because it has solidified into an (arch) bridge over it, and the bridge then collapses, a force and pressure surge occurs, which leads to load peaks on the silo wall.

In the case of silos, a distinction is made between flat or mobile and high silos due to the way they are built and how they work. The difference between a ground rent and a flat silo is fluid. Common types of silos are round, rectangular and octagonal silos. Polygonal silos have the advantage that they are manufactured in a modular design and, provided that a suitable steel structure is used, can be changed (enlarged) later. Such a modular design allows large-volume silos, which in the final state could no longer be transported by truck, can be transported easily and inexpensively. In agriculture , high silos , about 10 to 20 meters high cylindrical structures made of concrete, stone, steel, wood or plastic, in which grain or silage is stored, are common. There are also exceptionally high silos such as the Henninger Tower in Frankfurt or the grain silo of the Schapfenmühle near Ulm, which are over 100 meters high. These structures are called silo towers .

A technical special feature of the grain silo at the port city of 1949 in Gelsenkirchen-Schalke is that the resident mill operating Mullers Muhle belongs. The 37 meter high silo was built in 1949 from parts of the former submarine hulls.

For the preservation of green fodder in agriculture, high silos have been largely replaced in the past few decades by the more economical driving silos (also: flat silos ). These consist of a base plate and have side walls. If the silage is only stored on a base plate or without a fixed base plate, it is referred to as an open-air heap . The top cover is usually made of an airtight plastic tarpaulin, which is usually weighted down with tires or sandbags. A bird screen is usually used to protect the tarpaulin from damage. Silos are filled with chopped fresh or withered biomass, which is evenly distributed, compacted and covered airtight. The removal is usually done with special devices on the tractor ( silo block cutter ) or by wheel loaders with similar adapters. Silos are also used for ensiling and storing vegetable fermentation substrates for biogas production .

In agriculture, flour mills, large bakeries, but also in industry, textile silos, also called fabric silos, have been used for many years. The capacity of such silos can be up to 50 t per unit. Due to the "flexible" design, sizes of up to 300 m³ are possible. Recently, such silos have been used for storage in pellet heating systems. For the storage of pellets or for the storage of animal feed, there are now so-called small silos with a capacity of around 400 liters.

In the construction industry, ready- mixed mortar is delivered in mobile silos for plastering. These silos are usually linked directly to the mixing plant.

In the case of agricultural silos, there is a risk of fermentation gas accidents due to the accumulation of silo gas. Fermentation gases mainly consist of the invisible and odorless carbon dioxide (CO 2 ), as well as yellow-brownish, pungent-pungent smelling nitrous gases, which are mixtures of nitrogen oxides , mainly nitrogen monoxide (NO) and nitrogen dioxide (NO 2 ), which are created immediately at the start of ensiling . Since the fermentation gases are heavier than air, high concentrations and a corresponding risk of suffocation near the ground and in the area of ​​the silo cover (flat silos, but also on the surface of the bulk material in the tower silo) are to be expected. Animals in the surrounding stables can also be endangered.

When trying to stand in the bulk material, workers can sink into it or be spilled from it and then suffocate on the bulk material entering the airways or by its pressure on the chest. "The professional association for food and hospitality , BGN, receives reports with alarming regularity in which the risk of sinking is sometimes completely underestimated," says a statement from the BGN.

Before entering the silo, the silo gas must be removed by ventilation. Silo run-in pants , like belts in general, are intended to enable workers to be rescued from the silo by security guards, but do not offer absolute security. Rule 113–004 (BGR 117–1) applies to work in the silo: containers, silos and confined spaces of the German Social Accident Insurance . The need for access to the silo (troubleshooting, cleaning work) must be reduced, the risk must be carefully assessed, and entry must be carried out with an annually safety-checked silo drive system under supervision and with security guards.

In addition, depending on the bulk material, there can be a risk of dust explosions with high silos .

List of the highest silos for products in the feed or food industry:

If there is enough space available and / or different types or suppliers are to be kept separate, several lower silo shafts are built next to each other. In reinforced concrete, cells with a rounded square lumen are typically integrated into a rectangular outer contour (e.g. Taggermühle Graz since about 2018 re-use as an artist's studio) or one or two rows of cylinders that are connected via a common partition wall about 70% wide of the diameter .

Typical silo heights are 10–20 m in agricultural operations and 30–60 m in mills, warehouses and transshipment points.

Sheet steel, enamelled, is often used by farmers, not only for bulk goods (feed), but also for liquid manure and its fermentation into biogas. From sheet metal strips perforated at the edge - to a limited extent flexible - about 1.5 high and 3 m long, silos are built up in rings by screwing them to supporting and stiffening elements by overlapping.

Galvanized corrugated iron is more cost-effective, has to be manufactured and delivered with a precisely fitting curvature and is more likely to be affected by bridging when emptying the product due to the groove structure.

Silos for road salt are often made of corrosion-resistant glass fiber plastic (epoxy or polyester), enamelled sheet steel or less expensive wood. Wooden slats / boards made of larch are manufactured with a conical profile and clamped together with numerous steel bandages around the circumference to form a cylinder.

Function similar to a silo: