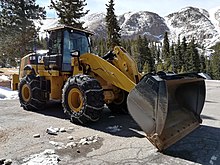 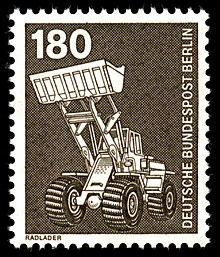 Massey Ferguson MF 77 on a 180 pfennig stamp of the definitive series Industry and Technology of the Deutsche Bundespost (June 12, 1979)

A wheel loader (in Swiss German : Trax ) is a construction machine for loading and transporting goods over short distances. Equipped with a shovel, a wheel loader is suitable for earthmoving work. There are wheel loaders with a total weight of less than 2 t and more than 200 t.

The compact loader is a smaller type of wheel loader . It is characterized by smaller dimensions and high maneuverability.

A special design of the loaders are in underground mining used LHD , which are distinguished by their low height.

Wheel loaders to a scale equipped to be to determine the mass of the cargo loading.

The first wheel loaders emerged in the 1920s and 1930s from agricultural tractors that were fitted with rope-operated loading shovels. From this, independent construction machines developed in the 1940s and 1950s, which were soon being mass-produced by many domestic and foreign manufacturers.

After rear-wheel and all-wheel steering, articulated steering prevailed in the 1960s and 1970s : the frame is divided into two parts about half the length, the front and rear of the vehicle are connected by an articulated joint with a vertical axis. In 1994, the manufacturer Liebherr introduced stereo loaders (brand) for rather smaller weights, which achieve particular maneuverability through articulation and rear-wheel steering. Articulated steering means that the shovel with the front carriage can be "shifted" to the side a bit, and the lifting mechanism does not need to leave any space for the steering movement of the front wheels. The driver usually sits above the articulated joint, and the cab can be connected to the front or rear of the vehicle.

In 1954, the first wheel loader prototype from Liebherr Elefant Type 90 with 90 hp and a total mass of 12 t was skid steer (ing) with a very short wheelbase. You steer by braking the wheels on one side only or even driving them in the opposite direction. This armored steering principle is used in all crawler tracks, compact loaders on 4 to 6 wheels and the amphibious off-road vehicle types from ARGO (from 1969 and 1971) with 6 or 8 wheels. This also enables turning while standing.

A wheel loader usually consists of the following components:

The range of parameters for wheel loaders is very extensive, as there are many different sizes. Small loaders achieve an engine output between 20 and 60 kW and large loaders an output between 70 and 590 kW. The operating weight of the small machines can be up to 7.5 t, and the larger machines up to 90 t. The loading shovel holds between 0.35 and 10.5 m³. In loading mode, the maximum speed is 15 km / h, depending on the model, while the wheel loader can reach up to 40 km / h when empty.

It is used around the world to load overburden or conveyed goods in large open-cast mines . These machines are often used when the primary dismantling device (rope excavator, hydraulic excavator) is not available due to technical problems. The LeTourneau machines are diesel-electric , which is a special feature for wheel loaders.

The steering on wheel loaders usually occurs by articulated steering. The joint is located approximately in the middle of the machine and is driven hydraulically. The driver usually sits on the rear of the car, less often on the front of the car. The driving experience is completely different.

Some wheel loaders from z. B. Kramer have no articulated steering, but the steering is via an all-wheel axle steering . This principle is characterized by a higher level of stability in the steered state, but has the disadvantage that the steering movement only has an effect while driving. With the articulated handlebar, the bucket can also be aligned to the side when standing. Another disadvantage of all-wheel steering is that the wheel loader swing arm swings out of the turning circle at the front when cornering, whereas a wheel loader with articulated steering “bends around the curve” so to speak, which makes work much easier in confined spaces, with all-wheel-steered wheel loaders have a smaller turning circle.

The tank steering of the skid steer loader has the disadvantage that the devices stir up the ground when changing direction. Their use should therefore be limited to paved surfaces, where they do no damage and where they can turn more easily. However, relatively high tire wear can then be expected.

Wheel loaders are manufactured by a wide variety of companies around the world. These include manufacturers who specialize in the construction and development of special wheel loader designs. The companies that manufacture wheel loaders include Caterpillar , Paus , Liebherr , Volvo CE , Atlas Weycor , Terex , Komatsu , Hitachi , Wacker Neuson with Weidemann & Kramer , Case CE , BelAZ and Mecalac .