The Atlas Weyhausen GmbH is a medium-sized German equipment manufacturer based in Wildeshausen . The company produces wheel loaders and rollers in various weight and performance classes. In 2014, 216 employees were employed in Germany and another 200 employees at the wholly-owned subsidiary Kapos Atlas Kft. In Hungary. 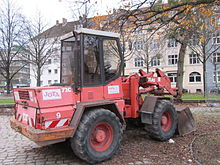 Protected by numerous patents, the manufacturer already assumed a leading international position in the construction of hydraulic excavators in the 1960s and in 1962 employed around 1000 people in the Vechta , Ganderkesee and Löningen plants . In 1969 the founder Hinrich Weyhausen died and his son Günter Weyhausen took over the management of Hinrich Weyhausen KG.

Günter Weyhausen's brother, Friedrich Weyhausen, founded an independent sister company to Hinrich Weyhausen KG in 1971. F. Weyhausen GmbH & Co. KG established its headquarters in Wildeshausen and opened a plant in Westerstede for the production of wheel loaders and backhoe loaders. In 1986, Hinrich Weyhausen KG was renamed Atlas Weyhausen GmbH . The company ran into financial difficulties in 1999 and was sold to EDER Handel und Beteiligungen GmbH , which sold it on to the US construction machinery manufacturer Terex from Westport in 2001 . The name was changed to Atlas-Terex GmbH .

F. Weyhausen GmbH & Co. KG continued to exist and was renamed in 2010 in the course of a change of legal form to Atlas Weyhausen GmbH (the company name was free again since 2001 when the sister company was sold to Terex). The wheel loaders have been sold under the Weycor brand since the end of 2015. The name Atlas or the name Atlas-Weycor, which was used temporarily from 2013, may no longer be used for trademark reasons. Atlas GmbH holds the rights. The name Weycor is an artificial name made up of the first letters of the company's founder, Weyhausen, and the Latin name “Cor”, heart.