Saint-Claude was the religious center of the Upper Jurassic with his Condat Monastery, founded in the 5th century . Today the economic life of the city is characterized by the manufacture of tobacco pipes, diamond cutting and the plastics industry.

Saint-Claude is located at 431  m , about 30 kilometers northwest of the city of Geneva and 105 km northeast of Lyon (as the crow flies). The city extends in the Jura , deeply cut in a basin on a rocky promontory above the confluence of the Tacon and Bienne , surrounded by Mont Chabot in the south, Mont Bayard in the east and the ridge of the Forêt d'Avignon in the west.

The area of ​​the community area of ​​70.19 km² covers a section of the French Jura. The area has strong differences in relief. From a geological point of view, Saint-Claude lies in the Folded Jura , in the midst of a series of synclines and anticlines , which are oriented in a south-west-north-east direction according to the strike direction of the Jura in this area. These parallel terrain structures are disturbed by faults in various places. The limestone layers on the plateau originate from the upper Jurassic period and in part from the Cretaceous period . Sediment layers from the Middle and Lower Jurassic Period are also exposed in the valleys. The river system, for its part, not only follows the existing structures, but also shows characteristic gullies (transverse valleys).

The most important flowing water is the Bienne, which crosses the municipality in a deeply cut valley. It reaches the basin of Saint-Claude from the north and turns west below the town to flow again through a gorge. In the basin of Saint-Claude it receives a flow from the east through the Tacon. Both rivers are sunk around 20 to 30 m into the valley floor in the area of ​​the city, which is why the main part of Saint-Claude lies on a limestone plateau or protruding terrain.

While only a small area on the western slope of the Bienne belongs to Saint-Claude, the municipal area extends far north over the forest ridges of Bois de Lésigna ( 780  m ), Bois de Cuttura ( 874  m ) and Bois de la Joux ( 940  m ) except for the wide moor plateau of Les Prés-Valfin . To the south and south-west, the communal soil extends to the heights of Mont Chabot ( 905  m ), Crêt de Surmontant ( 1055  m ) and Truffet ( 685  m ) bordering the valley of the Bienne and includes the left slope of the Bienne.

To the east, Saint-Claude is dominated by the heights of Mont Bayard ( 947  m ) and the Pain de Sucre ( 755  m ). In between is the erosion basin of the Gorges de l'Abîme , which is bordered on its upper edge by a horseshoe-shaped rock circus. Further to the northeast, the Cinquétral plateau and the large wooded area of Le Frênois Forêt join on the edge of the Hautes-Combes. The erosion valley Combe de Tressus , which is drained from the Grosdar to the Tacon, also belongs to Saint-Claude. On its northern flank, on the Rochers de Tressus , the highest point of Saint-Claude is reached at 1222  m . The municipality is part of the Upper Jura Regional Nature Park (French: Parc naturel régional du Haut-Jura ).

In addition to the city itself, Saint-Claude also includes numerous villages, hamlets and farm groups, including:

Neighboring municipalities of Saint-Claude are

Saint-Claude's roots go back to shortly after the year 400 AD. At this time, the saints Romanus and Lupicinus , who came from the region, founded one of the first monasteries in the West on the promontory over the confluence of the Tacon and Bienne on the site of a Gallo-Roman settlement. First the place was called Condadisco , derived from the Celtic word condate (confluence).

Under Oyend , the fourth abbot, the abbey and the settlement developed next to it developed into the religious center of the Upper Jurassic and became the seat of a principality. In honor of this abbot, the place was renamed Saint-Oyend-de-Joux in 510 . In the following time the abbey strengthened its influence in the region. The monks cleared many different areas in the valleys and on the plateaus of the Jura, made them arable and thus laid the foundation stone for numerous villages in the area. However, due to the harsh climate until the late Middle Ages, the plateaus of the Hautes-Combes were only populated during the summer half-year. Saint-Claude founded numerous monasteries in the Jura and in the adjacent Swiss plateau .

Saint-Oyend-de-Joux has developed into an important place of pilgrimage over the centuries. This function was further strengthened when the relics of the twelfth abbot Claude (died around 700) were rediscovered in very good condition at the end of the 11th century . For this reason, the place was renamed Saint-Claude at the beginning of the 12th century. The monks now lived according to the rules of the Benedictine order .

Saint-Claude gained its first freedoms as early as the 13th century before it was granted city rights in 1310. In the following time, the production of small items (wooden goods, pipes, etc.) for the pilgrims was established in the city, which was no longer fully dependent on the abbey.

Together with Franche-Comté , Saint-Claude came to France with the Peace of Nijmegen in 1678. The abbey began to decline gradually in the late Middle Ages. In 1742, Saint-Claude was made a bishopric . The diocese of Saint-Claude still exists today, but the bishopric was moved to Lons-le-Saunier . The French Revolution and a major fire in 1799 prevented the city from developing rapidly. In the meantime, various factories had set up along the rivers of Bienne and Tacon that relied on water power, including paper mills, cotton mills and wire drawing mills. In 1811 the area of ​​Saint-Claude grew by the incorporation of the localities Etables and Vaucluse.

In the course of the 19th century, Saint-Claude became an industrial city. Among the traditional industries the production came from pipes from briar the gemstone (for the production of jewelry and accessories for the watch industry) and snuff boxes, the violin, and especially from the 1880th Together with plastics processing, which was also introduced at the end of the 19th century, these industries shaped economic life well into the 20th century and were responsible for the rapid growth of Saint-Claude during this time.

On August 19, 1890, Saint-Claude was hit by a strong tornado . The storm caused severe damage. Five people were killed.

However , this upswing was suddenly stopped by the Great Depression in 1929 and the Second World War . Even after 1945 the recession continued, as Saint-Claude in the valley of the Bienne had little room for expansion and was away from the main traffic routes. However, this changed with the opening of the Plan d'Acier industrial zone in 1970. Various production plants were relocated from the city and settled in the new industrial zone, which opened up new possibilities in urban planning.

The area of ​​Saint-Claude was enlarged in 1974 when the five surrounding small communities of Chaumont, Chevry, Cinquétral, Ranchette and Valfin-lès-Saint-Claude with a total of around 450 inhabitants were incorporated. In 1993, the Communauté de communes de Val de Bienne, a community association was founded, which initially included Saint-Claude, Chassal and Molinges. Since 2003, Choux, Coiserette, Coyrière, Larrivoire, Viry and Vulvoz have also been part of it. 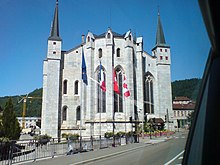 The Saint-Pierre de Saint-Claude cathedral on the edge of the old town at the foot of Mont Bayard was built in several stages from the 14th to the beginning of the 18th century. It is fortified, has more than three meters thick outer walls and a front tower (the second was not completed) and shows styles of Gothic , Classicism and Baroque . The cathedral conceals a rich interior: an altarpiece from the 16th century in the Italian Renaissance style, richly carved choir stalls (1447-1450), an organ in the style of Louis XVI , stained glass from the 15th century and the chapel Saint-Claude with the relics of Saint Claude.

On the site of the former Carmelite monastery, which was destroyed in the major fire in 1799, an atonement chapel has stood since 1869. The Sacré Cœur church dates from 1923.

The elongated old town, which stretches from the confluence of the Tacon into the Bienne for almost a kilometer northwards over the narrow promontory and onto the plateau at the foot of Mont Bayard, shows a late medieval character with townhouses built closely together, most of them from around 1800 come. Only a few remains of the former city fortifications have survived. The Maison du Peuple was inaugurated in 1910. An arch bridge built in 1861 leads over the Bienne.

Of the museums, the Musée de la Pipe et des Diamants (exhibition on the craft of pipe making and gemstone cutting) and another museum on horn pipes should be mentioned.

The surrounding villages, which are now incorporated into Saint-Claude, also have sights. These include the church of Cinquétral, built in the 17th century, the church of Valfin (19th century), the chapel of Vaucluse (1685) with a classical facade, the chapel of Chaumont with a wooden tower and the Château de Chevry (16th century) ) with its castle chapel.

With 9,279 inhabitants (as of January 1, 2017), Saint-Claude is one of the largest municipalities in the Jura department. Saint-Claude showed strong growth rates at the time of its industrialization in the second half of the 19th century. Already in 1895 the limit of 10,000 inhabitants was exceeded. The flourishing industry led to further growth, so that in the late 1920s, shortly before the Great Depression, the highest level was reached with around 14,000 inhabitants. After that, a population decline of almost 25% was registered. A renewed surge in growth followed in the period from around 1955 to 1975 in connection with the re-emerging industry. Since the mid-1970s, there has been an overall slight downward trend.

Today Saint-Claude is an important industrial city in the Upper Jura. The traditional industries of tobacco pipe making and diamond cutting continue to shape the city's economic activity. The plastics industry, metal processing and machine manufacturing, precision mechanics and the packaging industry are also important. Larger commercial and industrial zones are located near the train station west of the Bienne and downstream in a valley widening at Etables. This is where the Plan d'Acier industrial zone is located, which was set up in 1970 and now fills the entire valley floor on both sides of the Bienne. Saint-Claude is thus part of the La Plastics Vallée industrial region , which extends from Nantua to Oyonnax to Saint-Claude and also includes Morez .

The city has a rich cultural life. The major cultural events include the Upper Jura Classical Music Festival and the traditional Fête de Soufflacouls, which has been held every year since the Middle Ages. There are also cinemas, a theater and toy libraries in Saint-Claude.

As the center of the Upper Jura Regional Nature Park, Saint-Claude also benefits from tourism and is home to numerous hotels. The city is the starting point for both summer and winter leisure activities in the Upper Jura. The offer ranges from hikes, bike tours and fishing to skiing, parachuting, canyoning and caving.

The city has good transport links. It is on the main road that leads from Lons-le-Saunier through the Bienne valley and over the Col de la Faucille to the Geneva region. Other regional road connections exist with Oyonnax, Morez and Saint-Germain-de-Joux . The closest connection to the A404 motorway (Saint-Martin-du-Frêne-Oyonnax) is around 30 km away.

Saint-Claude has a train station on the railway line that runs from Bourg-en-Bresse via Oyonnax to Morez. At least the Oyonnax-St.Claude section has been closed. Instead, buses run. The Saint-Claude-Pratz airfield is located on a high plateau above Lavans-lès-Saint-Claude about 10 km west of the city. This airfield is or was a runway made of grass, no markings. He is obviously not approved for public air traffic. A model flying club is located on the premises.

Saint-Claude has had a partnership with the German city of Rottenburg am Neckar in Baden-Württemberg since September 1979 .

Wikisource: S. Claude in the Topographia Circuli Burgundici (Mathäus Merian)  - sources and full texts
Communes in the Arrondissement of Saint-Claude