View of Bodman from Lake Constance

Bodman-Ludwigshafen is a municipality that emerged on January 1, 1975 from the previously independent municipalities of Bodman and Ludwigshafen am Bodensee (formerly Sernatingen ). The community is located on Lake Constance and is part of the Baden-Württemberg district of Konstanz in Germany .

Bodman-Ludwigshafen lies at the western end of the Überlinger See with Bodman on the south and Ludwigshafen on the north of the arm of the lake. The community belongs to the Hegau . The Aachried nature reserve extends between Bodman and Ludwigshafen , where rare birds and plants have found refuge.

See also : List of places in the district of Konstanz # Bodman-Ludwigshafen

Stilt houses from the Stone and Bronze Ages have been found in Bodman . Under the name “ Prehistoric pile dwellings around the Alps ”, UNESCO recognized a total of 111 pile dwellings in six Alpine countries as cross-border world cultural heritage in June 2011 , including the site in Bodman-Schachen.

From Roman times , two kilometers west of today's village of Bodman, in the “Auf Mauren” area at the exit of the Dettelbach valley, a villa rustica with hypocaust heating can be traced back to the second half of the 1st century ; it was excavated as early as 1686. Two bronze vessels were also found here.

In the “Fraasen” area below the so-called “Bodenburg” there is a burial mound .

An Alemannic row grave field originates from the migration period northeast of the village halfway up the mountain near the "Bodenburg" .

In the 9th century was in Bodman a palace of the Carolingian named Potamico (served as naming the Bodensee), by the German Ludwig and Charles the Fat was used here was 759 Othmar jailed. In 1277 Johann von Bodman acquired the palace from King Rudolf von Habsburg .

"By abrading the language, Potamanns became Bodam, Bodan, Bodensee and the family became Knights of Bodman, and the ridge between the two lakes, which mainly belonged to the Knights, became Bodanrück and the village became Bodman."

For Bodman there was the spelling Bodma nn in the 19th century . In 1884, the State Ministry approved Johann Franz von Bodman's (1835–1906) application for an adjustment to the spelling of his name and published the change in the State Gazette for the Grand Duchy of Baden.

Ludwigshafen is first mentioned in a document as Sernatingen in 1145. In 1810 Sernatingen became Baden . In 1826 the newly built port was christened Ludwigshafen by Grand Duke Ludwig . At the request of the residents, this name was soon adopted for the entire community. A witness of the past is the elongated, massive building of the customs house at the ship landing stage with the inscription on the port side "Grand Ducal Badisches Hauptzollamt" with Baden's coat of arms. The building was rebuilt around 1990 and has served as the town hall, citizens' and guest center since 1993.

Shortly before the end of the Second World War , Ludwigshafen was the target of an air raid on February 22, 1945 as part of the Allied Operation Clarion , a joint venture between the US and British air forces. The aim of the US 320th Bomb Group with six Martin B-26 Marauder medium-range bombers from Épinal in Lorraine was the Ludwigshafen marshalling yard. The bombers dropped 48 bombs within 70 seconds, six of them with a long-term chemical detonator. As early as July 24, 1944, a low-flying attack took place on several ships from Konstanz, which were supposedly safely decommissioned in the port and in the bay of Ludwigshafen. One sank in port and two were badly damaged at anchor.

Until the district reform in 1973 , both places belonged to the Stockach district , and since then to the Konstanz district. On January 1, 1975, Bodman and Ludwigshafen on Lake Constance merged to form the new municipality of Bodman-Ludwigshafen.

The population of Bodman-Ludwigshafen is predominantly Roman Catholic . There is a Catholic church in each of the two suburbs and an additional Catholic chapel. But the Protestant and New Apostolic Church are also represented in the town.

The coat of arms awarded on May 17, 1976 by the Constance District Office unites elements of the coats of arms of the districts. Since the second half of the 17th century, Bodman had a coat of arms seal showing a split shield in front of half an eagle at the crack with a linden branch in its beak, and a linden branch in the back; the timing was established in 1895. The linden twigs are certainly an allusion to the family coat of arms of the Lords of Bodman. The landlord of Ludwigshafen (until 1826 Sernatingen) had been the hospital of the imperial city of Überlingen since 1294, as evidenced by the municipal coat of arms created in 1896 with an eagle (imperial city) and patriarchal cross in the breast shield (hospital).

Since July 30, 2000 there has been a friendship agreement between the former municipality of Schweta (now the town of Mügeln ) and the municipality of Bodman-Ludwigshafen.

Bodman-Ludwigshafen lies on the Bodensee-Radweg and Bodensee-Rundweg , which lead past many sights in different routes. One of the Way of St. James also leads past Ludwigshafen and Bodman.

The triptych of Ludwig's legacy

In Bodman Town Hall there was a small museum with numerous finds from the Stone Age. Since the town hall was demolished for the construction of a new event hall with tourist information, citizens' office and bistro, the museum does not currently exist. However, it is to be set up again in a modern form in the new building if the financing can be secured. Until then, a few finds will be on display in showcases in the restaurant in the new "Seeum" building.

The open-air exhibition of numerous sculptures by Peter Lenk is located in the Kaiserpfalzstraße in Bodman at the exit towards Ludwigshafen . On a building satellite of the former Baden main customs office at Ludwigshafen harbor (since 1993 the “Zollhaus” civic and guest center), the relief of Ludwig's legacy by Peter Lenk satirizes the renaming of the place from Sernatingen to Ludwigshafen and points to recent political interventions on the occasion of the financial crisis. The portrayal of five politicians as global players was heavily discussed. 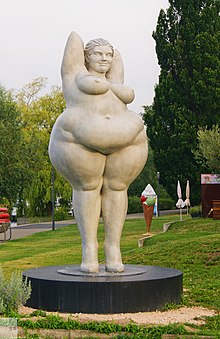 The sculpture Yolanda by the artist Miriam Lenk , Peter Lenk's daughter, who lives in Bodman, stands on the harbor promenade . The epoxy resin sculpture was installed there in 2017 and 'celebrates self-confident femininity beyond all fashions and dictates'.

There are brass bands in both places. The preliminary highlight is the self-composed musical Stettelberger , named after a legendary figure from Ludwigshafen.

In and at Bodman :

In and near Ludwigshafen :

View of the nature reserve

Both districts have extensive riverside parks with a view of the Überlingen part of Lake Constance. The Lake Constance landscape is characterized by numerous ravines on the shore , for example the Echotal with Molasse rock faces east of Bodman . The nature reserve " Bodenseeufer (Bodman-Ludwigshafen) " stretches along the entire bank area between Bodman and Ludwigshafen with the Aachried .

From a sporting point of view, the municipality of Bodman-Ludwigshafen presents a wide range of activities in water and on land. Surfing and sailing schools offer courses, including water skiing and wakeboarding on the program, also is a Skike -Akademy. The community offers an extensive network of hiking and cycling trails, both Bodman and Ludwigshafen are located on the Lake Constance circular route and the Lake Constance cycle route .

In October 2005, the Haldenhof Revival was held to commemorate the Haldenhof races held from 1969 to 1981. Classic cars and racing vehicles were able to compete in five classes on the 1.7-kilometer mountain route. Old Porsches, Maserati and formula cars created a special flair. The event took place again in October 2007.

View of the Ludwigshafen customs house

In summer there are regular beach festivals on the banks, such as the harbor festival around the customs house with night flea market on the last weekend in June and the lake festival on the third weekend in August with a large classic car meeting, both in Ludwigshafen.

Both districts are strongly influenced by fruit growing and tourism . The Königsweingarten in Bodman is a small exposed vineyard. The Pinot Noir vine was planted here for the first time in Germany in 884 by Emperor Karl the Dicken .

The district of Ludwigshafen is connected by the Bodenseegürtelbahn (Stahringen – Friedrichshafen section) to the railway network both to the west and into Switzerland and to the east on the north side of the entire lake.

The Swabian Alb bike path leads over 220 kilometer than Radfernweg of Bodman-Ludwigshafen on the Swabian Alb until after Nördlingen .

During the season, the route of the Motorbootgesellschaft Bodman mbH zigzags the places on the Überlinger See between Bodman and Überlingen including the Marienschlucht several times a day .

In the community there is the Sernatingen School, a primary and secondary school with a Werkrealschule , which has locations in both suburbs.

Personalities connected to the community