Reichenau is a municipality in the district of Konstanz in Baden-Württemberg . It includes the island of the same name , which is a UNESCO World Heritage Site, and areas on the mainland.

Extension and structure of the municipal area

The municipality of Reichenau is made up of a total of six or seven separate areas or districts , depending on whether Schopflen on the Reichenauer Damm is viewed as a separate area from the island. The five remaining parts of the area are on the Bodanrück peninsula :

District plan from 1876 with all areas and exclaves , with field names

The island of Reichenau is located in the Untersee , the westernmost part of Lake Constance . It has an area of ​​444 hectares and a population of around 3,200 (2008 estimate). It is connected to the mainland by the Reichenauer Damm built in 1838. The island is the historical, cultural and administrative center of the municipality. It has three districts. However, these do not have any pronounced settlement centers, but are rather scattered settlements . For this reason, other hamlets and detached houses and groups of houses were previously named within these island areas (see island article ). The island districts are: 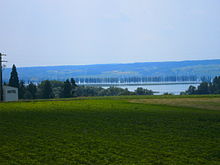 Reichenaudamm with poplar avenue seen from the Lake Constance circular route above Hegne.

The Reichenauer Damm, built in 1838 and covering an area of ​​18 hectares, connects the island of Reichenau to the mainland via the Schopflen castle ruins on its south side (which had previously been built on a shoal ). The state road L 221 Konstanz-Reichenau ( Pirminstraße ) runs along it as a 1300 meter long poplar avenue. Only the Bruckgraben, a 10 meter wide and 95 meter long passage for boats, interrupts the dam. The low Reichenau bridge crosses the Bruckgraben, which connects the Rheinsee in the south with the Gnadensee in the north, to the island of Reichenau. Immediately in front of the Reichenauer Bridge, on the north side of the street, there is a statue of Saint Pirmin . The moss areas north and south of Reichenauer Damm are also included in this part of the area.

The most important part of the mainland area of ​​the municipality, with an area of ​​261 hectares and a population of 1900 (estimate 2008), adjoins the Reichenauer Damm in the east, which begins at the Kindlesbild chapel. It was only with the construction of the railway in the 1860s that the first residential areas were built here, namely the station and the guard houses . Due to the limitation of construction activity on the island, construction activity in the last few decades has mainly taken place in this area of ​​the municipality. The following districts are here:

Occasionally the facility is counted as part of the Lindenbühl district in the broader sense.

Another fake, uninhabited exclave is the Zugwiesen corridor on the north bank of the Seerhein , also a winner. The area with an approximately triangular floor plan and an area of ​​around 54 hectares is surrounded by the industrial area of Constance , namely by the Wollmatinger Ried in the west (delimited by the Gottlieber Weg ) and the Unterlohn district in the east. In the south the area is limited by the Seerhein. The municipality of Tägerwilen (Switzerland) and the district of Tägermoos lie on the opposite south bank of the Seerhein, which is 100 to 300 meters wide . The exclave belongs to the Wollmatinger Ried nature reserve .

A real exclave is a mountainous forest strip over 3000 meters long and 50 to 650 meters wide between the municipality of Allensbach (district Hegne ) and the Constance district of Dettingen around the elevations, from west to east: Gockelsberg, Junisberg, Schönenberg (499.6 m) and Brückleberg (514.7 m, on the border with the Hegne district of the municipality of Allensbach), with an area of ​​125 hectares. A small meadow area in the west is also part of this exclave, namely the Gewann In Blenden , immediately east of the Gockelberg.

The Gewann Galgenacker is 900 meters long and around 70 to 190 meters deep shoreline of the Gnadensee opposite the island, which is bounded in the north by the railway line and includes this in the eastern part. The name Galgenacker comes from the former function as the place of execution in Reichenau, since no death sentences were allowed on the island itself.

The central mainland part with the forest settlement and Lindenbühl borders in the east on Konstanz ( Wollmatingen ) and in the west on Allensbach ( Hegne ). Schlafbach borders the Allensbach district in the east and Kaltbrunn (both municipality of Allensbach) in the north , and Radolfzell ( Markelfingen ) in the west .

Due to the temperature-equalizing effect of Lake Constance, the positive effects of the Alpine foehn and the resulting high number of sunny days, the climate is particularly mild not only on the island, but also in the neighboring mainland area of ​​Reichenau.

The community of Reichenau was never affected by a community reform or by incorporations.

The community belongs to the agreed administrative community of the city of Konstanz .

The local elections on May 26, 2019 in Reichenau led to the following official final result (with comparative figures from previous elections):

Blazon of the coat of arms awarded by the Ministry of the Interior after final tinging on July 7, 1960: In blue, the bust of an abbot in red bordered silver (white) robe and silver (white) miter with red trimmings and golden (yellow) crosses, in the right a silver one Holding (white) abbot's staff with turned crook, top left a silver (white) shield with a continuous red cross.

One of the main reasons why UNESCO declared Reichenau Island a World Heritage Site in 2000 is the fact that the buildings of the former Benedictine abbey are still intact , but above all the three Romanesque churches:

In the Center for Psychiatry Reichenau (ZfP) there is the Psychiatry Museum, a museum about the history of psychiatry in Reichenau. 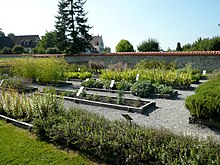 Next to the minster in Mittelzell is a herb garden which, according to the De cultura hortorum by Walahfrid von der Reichenau , in which he describes the healing properties of various herbs, is said to have existed as early as the 9th century.

A large part of the island is under landscape protection, some areas are also under nature protection. The wetlands near the shore are home to typical animal and plant communities of the Lake Constance region.

While Reichenau was a wine-growing region during the monastic era , today vegetable and fruit growing dominates agriculture ; only a few hectares of vineyards are cultivated. In addition, tourism is of course the main source of income for the Reichenau people.

The Center for Psychiatry Reichenau (ZPR) is a specialist hospital and psychiatric nursing home on the mainland above the Radolfzell - Konstanz railway line . The ZPR is an academic teaching hospital at the University of Konstanz .

On the road you can reach Reichenau via the federal road 33 , from which the state road branches off over the dam to the island between Radolfzell and Konstanz in the Reichenau district of Lindenbühl.

The Reichenau train stop is located in the Lindenbühl district. It is located on the Hochrheinbahn ( Basel - Konstanz ) of the Baden main line . In this section, the route is also part of the Black Forest Railway . The Seehas , a connection from Engen - Singen (Hohentwiel) - Radolfzell - Reichenau - Konstanz and on to Kreuzlingen in Switzerland , also operates here . With the ships of the White Fleet there are connections to all places on the Untersee and down the Rhine to Schaffhausen . Almost all places on Lake Constance can be reached via Konstanz.

The district savings bank Reichenau is based in the village.

Personalities who have lived and / or are living in the community