Hornstaadhaus in the Pfahlbaumuseum Unteruhldingen , replica based on finds from a pile dwelling near Hornstaad, part of the UNESCO World Heritage Site

Gaienhofen is a municipality on Lake Constance in the district of Konstanz in Baden-Württemberg .

Gaienhofen is located on the south and east side of the Höri peninsula on the Untersee opposite the Swiss community of Steckborn and the (German) island of Reichenau .

The community borders on Öhningen in the southwest and Moos in the northwest . The rest of the municipal boundary is formed by the shore of the Untersee.

Eight villages , hamlets , farms and houses belong to the municipality of Gaienhofen with the formerly independent municipalities of Gundholzen, Hemmenhofen and Horn, which have been incorporated since 1974 .

See also : List of places in the district of Konstanz # Gaienhofen


The Catholic parish church of St. Johann in Horn with its old church cemetery is a landmark of the Höri . About the unique view from the parish church in Horn on the Untersee up to the tower of the Konstanzer Minster, the saying of the Grand Duke Friedrich I of Baden is handed down: "If I weren't the Grand Duke of Baden, I wanted to be the pastor of Horn."

There are several Neolithic settlements in the district of Gaienhofen , for example in Hemmenhofen, Gewann “Im Leh”, and Hornstaad, Gewann “Hinterhorn”. The pile dwelling settlements Hornstaad-Hörnle I – V are Stone Age pile dwelling settlements from the period 3918–2690 BC. Investigations in the years 1973 to 1993 produced important results on economic, house building, settlement methods and social structure as well as on trade relations. Particularly noteworthy is Hornstaad-Hörnle IA on the banks of the Hörispitze, which was extensively investigated in an excavation lasting more than ten years and dendrochronological studies to around 3900 BC. Is dated. The latter has been part of the UNESCO World Heritage Site of Prehistoric Pile Dwellings around the Alps since 2011 . Finds and reconstructions can be seen in the Hermann-Hesse-Höri-Museum Gaienhofen and in the Archaeological State Museum Konstanz . The Hornstaad House can be found in the Pfahlbaumuseum Unteruhldingen as a replica for research purposes.

Gaienhofen was first mentioned in a document in 1295.

During the time of National Socialism there was a Gau school of the National Socialist Teachers' Association (NSLB) in Gaienhofen; formerly the "Seeheim of the Association of Badischer Lehrerinnen am Bodensee". In the NSLB-Gauschule Gaienhofen, the first of three permanent training centers of the Baden NSLB, so-called "teacher camps" for "ideological training" in the sense of National Socialist ideology have been held regularly since the beginning of 1934 (according to other information: 1935). One of the speakers was the local writer and Nazi propagandist Ludwig Finckh .

Today's community was re-formed on October 1, 1974 by the union of the communities Gaienhofen, Hemmenhofen and Horn. On January 1, 1974, the community of Gundholzen was incorporated into Horn.

The old coat of arms of Gaienhofen shows a red cross in silver, covered with a silver heart shield, inside a red [three-lobed] church flag with [three] gold rings.

The new coat of arms shows a red cross in silver, topped with a black heart shield, inside a double-row red and silver slanted bar.

A municipal kindergarten exists in the Horn district.

This is also where the primary school branch of the Hermann Hesse School is located. The secondary Hermann-Hesse-Werkrealschule is located in the Gaienhofen district.

Sculptures and works of art in public spaces 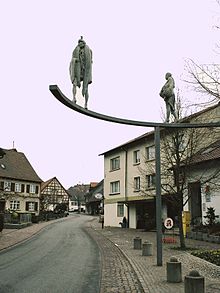 Peter Lenk created a sculpture that runs across the thoroughfare.

Personalities who have worked or are working on site