from Wikipedia, the free encyclopedia
This is the spotted version , flagged on April 3, 2020 . There are 2 pending changes that have yet to be viewed.

The Altbodman Castle , also spelled Alt-Bodman , is a high medieval castle ruin southeast of Bodman in the municipality of Bodman-Ludwigshafen in the district of Konstanz in Baden-Württemberg in Germany .

The ruins of the Spornburg are located on the wooded ridge "Bodenwald" 232 meters above lake level near Bodman ( 395  m above sea level ), near the Bodenwald estate. The spur-like spur on which the castle was built is located at 627  m above sea level. NHN . From there, large parts of the Überlinger See could be seen.

Today the Alt-Bodman castle ruins can be reached via a forest path from the direction of Bodenwald or via a hiking path from the valley towards Bodman.

The history of the castle begins around 1170 as the seat of the Lords of Bodman , Reich ministeriale of the Hohenstaufen .

Bodman Castle dates back to the 14th century when its predecessor, the old castle on today's Frauenberg, was destroyed on September 16, 1307 during a family festival after a lightning strike and members of the noble family and some members of the Hegau nobility perished in the subsequent fire . Among the victims were Conrad, Katharina, Adelheid and Anna von Bodman, Gottfried von Kreyen (crows), Heinrich von Blumegg and the knights Hans von Bodman and Hans von Schellenberg. Only the youngest male bearer of the gender name, the one-year-old Johannes von Bodman, survived the catastrophe when the nurse put the child in a large cauldron and threw it and the child out of the window. The kettle tumbled down the rocks, was braked by the bushes, and finally got stuck.

The castle rebuilt under Johannes von Bodman, today's ruins of Bodman, was completed in 1332 on a mountain opposite the Frauenberg.

At the site of the completely destroyed previous castle, the rescued man's grandfather built a chapel with a priestly house, today's Frauenberg monastery , and donated it to Salem monastery .

The castle was damaged during the Swiss War in 1499. It was later expanded into a military fortress. But she too fell victim to the Thirty Years' War .

During the Thirty Years War, the castle was destroyed again on August 15, 1643 by French troops from the governor of Überlingen , General Count Charles Christophe de Mazencourt , Vicomte de Courval. He left with allied Wurttembergers the castle on 15 August 1643 grind . The aristocratic family then settled in Espasingen Castle, and in 1760 they moved to Bodman Castle .

In 1851, Baron Sigmund von und zu Bodman decreed in his will that the Altbodman ruins, including an outer and core castle with a residential tower, should be preserved. Johann Otmar Graf von und zu Bodman initiated the first renovation measures in 1900, which became necessary due to cracking caused by lightning strikes. He had the damaged parts of the wall repaired and the viewing terrace built. Another minor renovation followed in 1922.

In 1956, Dr. Johannes Graf von und zu Bodman carried out extensive conservation measures to secure the ruins, with the advice and support of the State Monuments Office in Freiburg. It was renovated because wild shrubbery blew up the walls and the weather and lightning strikes caused the masonry to collapse in parts. In 1997 the owner Wilderich Graf von und zu Bodman cleared the ruins of trees again.

The Altbodman ruins were closed to the public from the end of 2002 to spring 2007. In 2003 the entrances were closed due to the increased risk of individual parts of the wall collapsing in order to protect the public from falling rocks. For this purpose, Wilderich Graf von und zu Bodman commissioned the Überlingen architects Haro Kraus with the renovation and invested around 1.5 million euros. The work was coordinated with the monument authority in Freiburg. The Baden-Württemberg Monument Foundation has initially provided 120,000 euros in funding for the first construction phase. To protect against vandalism, the ruin was closed with a building door. The renovation measures should be completed by 2009. The ruin has been open to the public again since spring 2007. 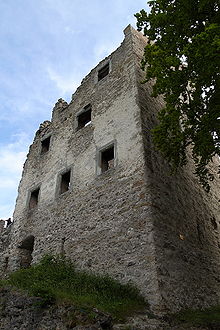 The ruin of the castle complex is quite well preserved and was named " Monument of the Month July / August 2005" by the Baden-Württemberg Monument Foundation.

The main castle was preceded by a bailey on the south side . From the lower outer bailey one reached the former gatehouse via a ramp in the west below the inner bailey. In the east of the outer bailey, parts of a retaining wall were preserved. The outer bailey was also secured against the mountain ridge (soil forest) by means of an upstream neck ditch .

In addition to the remains of the wall, the 19.50 by 19.15 meter residential tower has been preserved from the former main castle. In 1900 during the first renovation work, a viewing terrace was installed on the northeast corner of the residential tower.

At the place where the boiler got caught during the fire of 1307, a memorial stone still commemorates this event. The kettle can be seen in the castle. The Lords of Bodman are the only noble family in the Lake Constance area that has remained settled to this day.

List of castles and palaces in the district of Konstanz