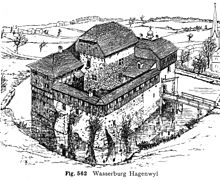 Otto Piper was the youngest of five children of Protestant pastor Wilhelm Piper (1806–1873) and his wife Julie, née. Mercker (1818-1888). He was born in Röckwitz near Stavenhagen . He attended grammar school in Neubrandenburg from 1851 to 1862 and passed his Abitur here in 1862 as the best in his class. During his time in Neubrandenburg, about which he later reported in school memories, he met Fritz Reuter , Johannes Schondorf and other personalities from Reuter's circle of friends. After studying law in Munich , Berlin and Rostock from May 1864 , where he was awarded a Dr. jur. received his doctorate, Piper first settled as a lawyer in Rostock. There he met his future wife Sophie Krüger among his colleagues.

Soon after the end of the Franco-Prussian War, he went to Strasbourg as editor of the “Niederrheinischer Kurier” . Later he was editor of newspapers in Trier and Düsseldorf, from where Piper returned to Mecklenburg in 1879 . From 1879 to 1889 he was mayor of Penzlin . He then moved to Constance on Lake Constance and in 1893 to Munich.

His main work Burgenkunde (1895) is still one of the standard works of German-speaking castle research, which, based on the work, is also generally referred to as Castle Studies. His big rival was Bodo Ebhardt , the other famous German castle explorer at the turn of the century. For example, Piper accused Ebhardt of opportunism when he rebuilt the Hohkönigsburg in Alsace on behalf of the German emperor in 1902 and, contrary to his own scientific knowledge, made several ahistorical changes to meet the taste of his client.

Otto Piper had three children, including the publisher Reinhard Piper .