The Hungarian Revolution of 1848/1849 was an uprising in the revolutionary year of 1848 and was closely connected to the other uprisings of 1848 in the Habsburg Monarchy . However, the revolution in the Kingdom of Hungary developed into a war of independence against the supremacy of the Austrian Habsburgs .

Many of the leaders and participants in the revolution, such as Lajos Kossuth , István Széchenyi , Sándor Petőfi or Josef Bem, are today considered to be important figures in the history of Hungary . The anniversary of the beginning of the revolution, March 15, is also one of the three national holidays in Hungary .

Trigger of the revolution

The Hungarian state parliament in Pressburg was re-established in 1825, primarily to discuss state finances. At this time, a Liberal Party was formed within parliament that sought to reform the Hungarian social order and opposed the centralistic and absolutist aspirations of the Viennese government. This epoch is known as the reform period in Hungary . Although the liberals claimed to stand up for the interests of the rural population, as representatives of the nobility they had no interest in the abolition of the feudal order and the forced labor that the Viennese government repeatedly threatened with. 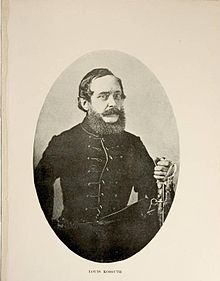 Lajos Kossuth, the leader of the Hungarian revolution

Count István Széchenyi (1791–1860) was a political reformer and the leading figure of the new liberalism . Széchenyi tried again and again to win the Viennese government over to his plans. In the person of the Palatine , Archduke Joseph Anton (1776–1847), he had a benevolent patron for a long time. The leading statesman of Austria, Prince Metternich , considered Széchenyi to be a rebellious spirit that was aiming at the division of the empire . Széchenyi proved to be too cautious and too loyal to the government for the growing Hungarian national feeling.

Since 1830, the magnate Lajos Batthyány (1807–1849) also took part in the session of the Hungarian state parliament in Pressburg as a member of the table of magnates . In 1847 he was elected chairman of the reformers. As such, he fought resolutely for Hungary's autonomy rights, for an independent government and a constitution. Unlike Kossuth, he was not an advocate of violent action, but as a moderate reformer he wanted to achieve the same goal through planned negotiations with the Vienna government. 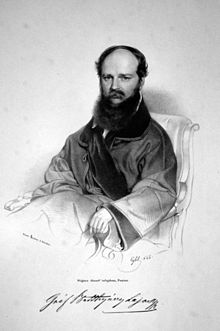 The lawyer Lajos Kossuth (1802-1894) took over the leadership of the minor nobility in parliament. From 1825 to 1827 he represented the national liberal-minded Count Hunyady in the Bratislava state parliament; He took on the same task from 1832 to 1836 for three members of the Hungarian manor house. Since December 1832 he wrote the reports from the state parliament , from July 1836 to May 1837 then the reports from the municipalities , in which he recorded the state parliament and county assemblies. Because he reproduced these works in copies and thus deliberately defied a government ban, Kossuth was charged with high treason and sentenced on May 5, 1837 to four years imprisonment. After his pardon in 1840, however, a year later he again published the national liberal newspaper Pesti Hírlap , of which he was editor-in-chief. In the course of the revolution, Kossuth radicalized his ideas up to the demand to fight for the complete independence of Hungary from Austria. As a result of the March Revolution of 1848 in the Austrian Empire , Kossuth demanded in a speech written on March 3, 1848 the constitutional transformation of the monarchy and constitutions for the Austrian states.

12 points of the Hungarian revolutionaries of 1848

The revolution in Hungary began on March 15, 1848, when in Pest and Buda -violent mass demonstrations the imperial governor to forced to accept all 12 points of the Hungarian revolutionaries, in which, among other things, freedom of the press , the abolition of censorship and forced labor were demanded. This was followed by several uprisings across the kingdom, which resulted in the Hungarian reformist forces calling for a new government for Hungary with Lajos Batthyány as prime minister. The new government passed comprehensive state reforms, the so-called April or March Acts , which aimed to create a democratic state in Hungary. They also included that the Hungarian government should have full sovereignty over the use of all taxes levied in Hungary as well as the supreme command of the Hungarian regiments of the Imperial and Royal Army .

In the summer of 1848, with full awareness of the cause of a civil war between Hungary and Croatia , the ministers of the Hungarian government offered the Habsburgs to send Hungarian troops to Northern Italy in return for support against Josip Jelačić , who was loyal to the Habsburg castle, but who was anti-Hungarian receive. At the end of August, the imperial government in Vienna instructed the Hungarian government in Pest to suspend plans for a Hungarian army of its own. Jelačić then began military actions against the Hungarian government without official orders. Croatia was a neighboring country to the Kingdom of Hungary and the delimitation of the competences of the two state parliaments repeatedly caused disputes. Many Croatians felt threatened by the increasing policy of Magyarization , i.e. equating Hungary with the Hungarian nationality and language, which began in the 1840s and intensified with the revolution.

In a three-front war (against Jelačić's Croatian troops, in the Banat and in Transylvania ), the Hungarian radicals saw Pest as a good opportunity. Parliament preferred to make concessions to the radicals in September in order not to let events turn into violent confrontations. Since revolutionary events also took place in Vienna, Austria initially accepted the Hungarian government. But after the revolution in Vienna was suppressed and Franz Joseph I replaced his uncle Ferdinand I as emperor, she refused to accept the new government. Finally, there was a break between Vienna and Pest when Field Marshal Count Lamberg was entrusted with the supreme command of all troops in Hungary (including those under Jelačić's command) on September 25th. After a fatal attack was carried out on Lamberg a few days later, the imperial court ordered the dissolution of the Hungarian parliament and the government. Jelačić was used as the successor to Lamberg. The war between Austria and Hungary officially began on October 3, 1848.

Jelačić was able to count on the support of the majority of the Croatian, Serbian, Slovak and Romanian rural populations. On the other hand, many Jews , hoping for an improvement in their legal position, and a large number of Polish, Austrian and Italian volunteers sided with the Hungarians .

The Ku Landwehr was able to stop the Croatians at Pákozd in September 1848 before the planned advance on Pest and concluded a short-term armistice that enabled Jelačić to lead his troops to Vienna.

In Vienna the October Uprising broke out when insurgents attacked a barracks whose garrison wanted to move out to reinforce Jelačić against the Hungarians. After the imperial army had regained control of the capital Vienna by the end of October after a victory at Schwechat on October 30th, 70,000 men were sent to Hungary under the command of General Windischgrätz to pursue the Hungarians to the border. The Hungarian government had to leave Pest at the end of December 1848, and Windischgrätz then moved into the opposing capital and moved into winter quarters. 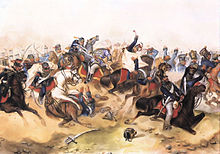 The imperial army suffered heavy defeats in March in Transylvania and in April 1849, among others at Isaszeg and Nagy-Sarlo, after which they had to return to the Waag line at the end of April . Without completely defeating the Austrian army, the Hungarians under their Commander-in-Chief Artúr Görgey stopped their advance in the area of ​​the fortress Komorn . They succeeded in returning to Pest and successfully sieging Ofen (Buda). General Jozef Bem had already taken all of Transylvania into his hands.

The failure of Austrian Field Marshal Windischgrätz now became so obvious that he was initially replaced by Welden , and from mid-May by the more energetic Feldzeugmeister Julius von Haynau .

As a result of several victories, Kossuth proclaimed the complete independence of Hungary from the Habsburg Empire on April 13, 1849 . Kossuth was confirmed as imperial administrator and ruled with dictatorial omnipotence.

Emperor Franz Joseph then asked Tsar Nicholas I, known as the “European gendarme”, for military support.

From mid-May, Russian armies under Prince Ivan Paskewitsch and Lüders from Galicia and Wallachia broke into northern Hungary and Transylvania from several sides . This fact established a lasting tense Russian-Hungarian relationship. In June 1849 the Russian and Austrian units united on Hungarian soil reached a combined total of over 250,000 men and thus doubled the Hungarian army.

After all the Hungarians' calls for help to other European powers were unsuccessful, Kossuth abdicated on August 11, 1849 in favor of Görgey, whom he assumed would be the only general who would be able to save the nation. On August 13th, Görgey capitulated in Világos to the Russians under General Rüdiger, who in turn handed over the prisoners of war to the Austrians. The Hungarian garrison in the Komorn Fortress under Georg Klapka did not capitulate until the beginning of October.

Surrender of the Hungarian army in Világos in 1849

The victor Feldzeugmeister Haynau remained imperial governor of Hungary for a few months and continued to suppress the defeated enemy. In agreement with the emperor, he ordered the execution of the 13 commanders of the Hungarian army in Arad , on the same day the former prime minister Lajos Batthyány was executed in Pest.

The suppression of the revolution

After the war of 1848-49, large parts of Hungary found themselves in "passive resistance". Archduke Albrecht von Habsburg was appointed governor of the Kingdom of Hungary and suppressed any aspirations for independence or autonomy.

Lajos Kossuth had to go into exile. In the United States , he was received with great enthusiasm by the public and by Secretary of State Daniel Webster , which led to tensions in US diplomatic relations with Austria. Even a county in Iowa was named after Kossuth, who went to Istanbul and later Turin .

His greatest and decisive political mistake in the revolution was the confrontation with the ethnic minorities of Hungary. Nevertheless, he made the idea of ​​a multi-ethnic confederation of Danube countries popular, which should prevent any conflict between the ethnic groups in this area. Many of Kossuth's companions in exile, including some of his nephews, as well as other supporters of the 1848 Revolution (" Forty-Eighters ", "48s") remained in the United States, where they fought on the side of the Unionists in the American Civil War.

Battles of the Hungarian Revolution

Other personalities of the Hungarian Revolution

The whereabouts of the revolutionary flags

After the defeat of the Hungarian army at Világos in 1849, the Hungarian revolutionary flags were brought to Russia by the victorious tsarist army. They stayed there for almost a century. In 1940 the Soviet Union proposed to the Horthy regime that they should be exchanged for the imprisoned communist leader Mátyás Rákosi , which they did.