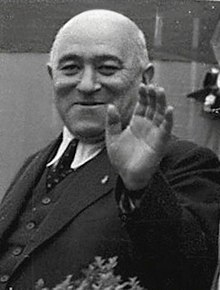 Rákosi had the reputation of an extremely tough Stalinist and fled to the Soviet Union in the run-up to the Hungarian popular uprising in autumn 1956.

From the soldier to the Comintern leadership

Rákosi was born in Vojvodina , which is now part of the Republic of Serbia , to Jewish parents and served in the Austro-Hungarian army during the First World War . On the Eastern Front he was taken prisoner by Russia . In revolutionary Russia he became a staunch Marxist and returned to Hungary, where he became a member of the government of the Soviet Republic under Béla Kun in 1919 . When this failed after four months, he fled to Soviet Russia .

On his return to Hungary in 1924, Rákosi was arrested and imprisoned. After his release in 1940 he went back to the Soviet Union , where he became the leading Comintern functionary. Here he married the divorced lawyer Feodora (Fenja) Kornilowa in 1942, a woman of Yakut origin who would stay by his side until the end of his life. Towards the end of the Second World War he returned to his homeland with the Red Army and in May 1945 became General Secretary of the Communist Party.

Mátyás Rákosi in a radio studio in Budapest, 1952

After Hungary came under Soviet control after the Second World War and the Communists came to power with unclean methods, Rákosi became General Secretary of the Hungarian Working People's Party ( Magyar Dolgozók Pártja ), which emerged on June 12, 1948 from the Communist Party and the Social Democratic Party. . He led the party in a very authoritarian manner , consolidated his power and organized the gradual Sovietization of the country. All non-Stalinist organizations were banned or brought into line .

Rákosi described himself as " Stalin's best Hungarian student". For his systematic Sovietization, he took up the term “ salami tactics ” coined by his political opponents to describe how to eliminate a democratic opposition piece by piece. In 1949 Rákosi's state terror began . The Security Police ( ÁVO ) took vigorous action against all opponents of the regime, several thousand were killed in the process.

In 1952, Mátyás Rákosi also became prime minister and placed the Hungarians under very authoritarian rule. The country got into a severe economic crisis with a massive deterioration in economic conditions and an agricultural crisis. For this reason, as well as because of the death of his sponsor Stalin on March 5, 1953, the Soviet leadership forced him in June 1953 to give up the post of prime minister in favor of Imre Nagy . However, he remained party leader of the Hungarian Working People's Party. In early 1955, the group around Rákosi regained power. Nagy was removed from office on April 14, 1955 and András Hegedüs was appointed as his successor. Rákosi remained MDP General Secretary, although the Hungarian uprising was already emerging, and had thousands of opponents of the regime arrested or killed.

On February 25, 1956, Khrushchev gave his famous secret speech on the XX. Party congress of the CPSU ; The content of this speech against the Stalinist personality cult soon penetrated the other Eastern Bloc countries. In July 1956, Rákosi had to resign from his position as general secretary of the MDP. Ernő Gerő became his successor; Rákosi fled again to the Soviet Union, where he lived for another 15 years.

During the time of the Stalinist dictatorship of Rákosi, and under his personal responsibility (together with the Soviet chief Lavrenti Beria ), the show trial and the subsequent execution of László Rajk on October 15, 1949, a popular Hungarian communist who did not like the war like Rákosi, took place had spent in the Soviet Union. In the show trial, Rajk was accused of “ Titoism ” and treacherous collaboration with the United States .

After Rákosi's fall, the dead Rajk was rehabilitated.