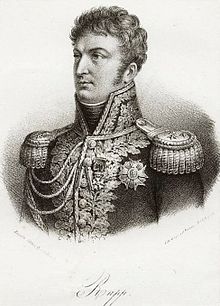 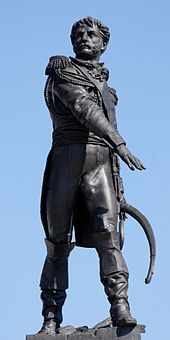 Monument on the Champ de Mars in Colmar

He was born the son of the caretaker of the Colmar town hall and joined the French army in 1788. Rapp distinguished himself during the Revolutionary Wars in Egypt and Germany and made a steep career due to his bravery and straightforwardness. Initially a simple soldier, after his outstanding performance in the Battle of Austerlitz in 1805 he rose to the rank of Général de division and Adjutant to Napoleon Bonaparte . In 1809 he was raised to the rank of count as "Jean Comte de Rapp".

As governor of Gdansk , he defended the city for almost a year after Napoleon's troops withdrew from Russia . After surrendering at the end of November 1813, he was taken to Russia as a prisoner and did not return to Paris until July 1814.

After Napoleon's return from exile on Elba , he supported the emperor during the Hundred Days . During the restoration, however, Rapp offered his services to the French royal family and became treasurer of King Louis XVIII.

He died on November 8, 1821 in Rheinweiler (today part of the Bad Bellingen community ) in Baden - where he had settled in 1817 - of stomach cancer. His hometown Colmar had a monument erected on the Champ de Mars in 1856 . The inscription reads “Ma parole est sacrée” (My word of honor is sacred).

Rapp's heart is kept in a shrine in the Colmar church of Saint-Matthieu (formerly Franciscan church).

In 1805 Napoleon Bonaparte arranged Rapp's marriage to the eldest daughter of Ignace-Joseph Vanlerberghe , Josepha Barbe Rosalie. However, this marriage was not happy and lasted only from March 28, 1805 to July 1, 1811, the couple divorced childless.

The relationship with his Danzig lover, Juliane Böttcher, had two children:

Children from the marriage with Albertine von Rotberg:

Fort Rapp is originally called the Fort des Hautes Perches in Belfort, which was built between 1874 and 1877 and later colloquially known .

The former Fort Moltke in Reichstett was named after Rapp after 1918 , one of the most important Prussian fortresses in the fortress belt around Strasbourg .