Brundle started between 1984 and 1996 at 158 ​​Grand Prix in the Formula 1 World Championship, but he achieved his greatest successes in sports car races . He won the world championship there in 1988 and was victorious in the endurance classic in Le Mans in 1990 . Brundle's son Alex is also active as a racing driver.

Brundle started his career at the age of 18 in the British Formula Ford . He quickly rose to Formula 3 and drove there in 1983 with the later Formula 1 world champion Ayrton Senna for the title, which he just lost. For the 1984 season, Brundle moved to Formula 1 , where he was teammate of the German Stefan Bellof at Team Tyrrell . In his seventh race in Detroit , Brundle was able to achieve a spectacular success when he finished second. However, the Tyrrell team and its drivers were disqualified at the end of the season due to allegations of technical manipulation and all results were withdrawn, so that this placement was invalid. For Brundle, the season ended prematurely two weeks after the race in Detroit after a serious accident in qualifying for the US Grand Prix in Dallas , in which he injured his feet, which has since caused him problems with braking. Since in the further course of the 1980s Brundle did not have any notable successes in Formula 1 because of the hardly competitive material at Tyrrell and Zakspeed , he took part in sports car races. There he won the world championship in 1988 and the Le Mans 24-hour race in 1990 , both in a Jaguar .

Back in Formula 1, Brundle got a cockpit at the later world championship team Benetton , where he became a teammate of Michael Schumacher , thanks to his sports car successes in the 1992 season . It was Brundle's most successful Formula 1 season: he was on the podium five times and came second behind his former opponent Ayrton Senna, his best individual result at the Italian Grand Prix in Monza . Despite the success, Brundle was clearly in the shadow of the later record world champion Schumacher, who finished third in the world championship with a victory, while Brundle took sixth place in the drivers' standings. Brundle's contract was not extended by Benetton team boss Flavio Briatore .

In 1993 Brundle started for Ligier and achieved impressive results in a solid car from the front midfield. He was third on the podium at the San Marino Grand Prix and finished seventh in the World Championship. When he was offered the vacated cockpit of Ayrton Senna for the then most successful team in Formula 1 history, McLaren , in the 1994 season , Brundle took it and became a teammate of the eventual world champion Mika Häkkinen . Once again, however, he was unable to demonstrate his skills with a top team and was clearly behind Häkkinen throughout the season. He achieved a remarkable success at the Monaco Grand Prix , which he finished second behind his former team-mate Michael Schumacher. At the end of the season Brundle lost his cockpit again and went back to Ligier for the 1995 season. There he was able to draw attention to himself again at the Belgian Grand Prix on the Spa-Francorchamps track, known as the driver's track , when he finished third in changing weather conditions. 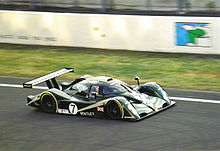 In 1996 Brundle played his last Formula 1 season for the Jordan team. Many technical failures faced bad starting positions and only eight championship points. Since Eddie Jordan no longer planned with him for the following season, Brundle ended his Formula 1 career. In total, he took part in over 160 Grand Prix races (158 starts) and was on the podium nine times. His best starting position was third place at the 1993 French Grand Prix in Magny-Cours . He did not achieve any lead kilometers or fastest race laps.

In 1997, Brundle returned to sports cars and started again for Nissan at the 24 Hours of Le Mans. In 1998 and 1999 he repeated this for Toyota with the GT1. He also competed in the 2001 Bentley comeback at Le Mans. However , there was no further start, which was planned with his friend Mark Blundell in an Aston Martin . The two then drove together for the 2011 Daytona 24 Hours, where they finished fourth, on the same lap as the winner.

Brundle first became a commentator for the British TV station ITV Sport in 1997 and accompanied, u. a. temporarily together with Murray Walker , until 2008 the Formula 1 reporting. From 2009 to 2011 he worked in the same position for the BBC before moving to the pay-TV channel Sky, where he still works today.

In the meantime, Brundle was also a motorsport official (chairman of the British Racing Drivers' Club ) and manager of the former Scottish Formula 1 driver David Coulthard .

1 After electrical problems in his original vehicle, Brundle switched to the later winning car and replaced Eliseo Salazar .