Zakspeed is a racing team that has been active in automobile racing since 1968 and is based in Niederzissen / Eifel . It was founded by Erich Zakowski . The son Peter Zakowski has been leading the team in international outings in various racing series since the 1990s .

In January 2019, Philipp Zakowski also joined the family company as managing director. He heads the department with a focus on marketing / sales. 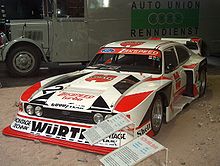 Zakspeed-Capri in 1980 on the Nürburgring 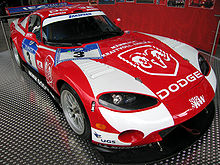 In the 1970s and 1980s Zakspeed competed very successfully in the German Racing Championship (DRM) with the Ford models Ford Escort and Capri . Zakspeed won the championship title from 1973 to 1976 and 1981 and was thus even more successful in 1973 and 1974 than the Ford works team that also competed. From the end of the 1970s, the thoroughbred racing touring cars in Group 5 were equipped with a four-cylinder turbo engine developed in-house. The 1.4-liter variant for the so-called "small" division up to 2000 cm³ (turbo handicap factor 1.4) produced approx. 400 hp, the later variant with approx. 1.7 liters for the large division over 500 PS. With such a Super Capri , the Nordschleife of the Nürburgring was circled almost as fast as Formula 1 a few years earlier .

According to the rule changes by the FIA in 1982, these vehicles were useless because from then on in the German Racing Championship sports cars of the Group C lead. Zakspeed switched to the Ford C100 and only used the Capri sporadically until 1983.

At the beginning of the 1980s, Erich Zakowski hoped to receive an order from Ford to develop a turbo engine for Formula 1. Ultimately, however, Ford gave the order to the British subsidiary Cosworth , which had the engine ready for use at the beginning of 1986 (the engine with the designation GBA was finally used in 1986 by Haas and 1987 by Benetton ). Erich Zakowski then decided in the summer of 1983 to move up to Formula 1 independently and without any financial support from Ford. In the following months Zakspeed developed a turbo engine according to Formula 1 rules and its own chassis, the prototype of which was ready to drive in the summer of 1984. The Formula 1 debut took place in 1985. Zakspeed was the only team besides Ferrari that manufactured its own chassis and engine ( the independent racing team Euroracing was behind the nominal factory team from Alfa Romeo ).

The chassis designer was the British engineer Paul Brown , while Norbert Kreyer was responsible for engine development . Zakspeed's first Formula 1 car, the Zakspeed 841 , was developed back in the summer of 1984. Due to financial problems, the team was not able to enter Formula 1 in 1984 . The opportunity to report did not arise until the spring of 1985, after the tobacco company Reemtsma had signed a sponsorship agreement with the team. Zakspeed then advertised the Reemtsma brand West . The connection to West established in April 1985 lasted until 1989. At races in countries where cigarette advertising was banned, the red and white cars occasionally did not appear with the West logo, but with the inscription "East", which was graphically in the style of the West logo.

By the time Zakspeed entered Formula 1, the development of the turbo engine was already well advanced - among other things by the German engine suppliers Porsche and BMW , who were involved there, and the performance was increased considerably. In 1985 the best turbo engines already achieved outputs of over 1000 hp in qualifying trim. Zakspeed quickly fell behind these high-performance engines. The team was unable to maintain the lead in experience gained in previous touring car races and was no longer able to convert it into successes. The racing car and its drivers failed to achieve any notable successes. The only two points in the team's history went to the Briton Martin Brundle in 1987 with rank 5 in Imola .

For a while, Zakspeed was the only Formula 1 racing team to employ Christian Danner, a German driver, after both Stefan Bellof and Manfred Winkelhock had fatal accidents in sports car races in 1985 . In 1988 and 1989 the German Bernd Schneider drove for Zakspeed in Formula 1.

The 1989 Formula 1 season was a major turning point for the small team. For the first time in a long time, turbo engines were banned. The development of its own naturally aspirated engine was out of the question for Zakspeed for reasons of cost and lack of experience with non-supercharged engines. Instead of an engine from Cosworth , which was used by numerous small teams in 1989, this season Zakspeed purchased a newly developed eight-cylinder engine from Yamaha exclusively for the Zakspeed 891 designed by Gustav Brunner . The engine proved to be inefficient and immature; in particular, there was a lack of the required reliability. Zakspeed had no influence on the development of the engine; the team had to use the products as they were shipped from Japan. The lack of competitiveness of the engine meant that Zakspeed's driver Bernd Schneider was only able to qualify for two races; his team-mate Aguri Suzuki missed pre-qualification at every Grand Prix. This made Zakspeed the worst team of 1989 after EuroBrun .

At the end of 1989, West stopped supporting the team. Yamaha was ready to supply the team with engines free of charge in 1990 as well . Zakspeed then took part in the test drives in Le Castellet in January 1990 with a barely modified 891 chassis. Here, too, the team barely got to drive because the engine's reliability problems persisted; Defective fuel pumps in particular caused long downtimes. After the disappointing results of the test drives, the last sponsors dropped out, so that a renewed commitment in 1990 could not be financed. Zakspeed then stopped reporting for the new Formula 1 season. Since Zakspeed's competitor Rial Racing did not compete either, the 1990 World Championship ran for the first time since 1977 without a German team.

In the 1990s Zakspeed raced touring cars from BMW , Mercedes and Opel in the DTM . In 1998, two Porsche 911 GT1 competed in the FIA GT World Championship .

Peter Zakowski had previously worked as a young racing driver a. a. came to some successes in Formula 3 and took part again and again victoriously on the Nordschleife of the Nürburgring in the BFGoodrich endurance championship and the 24-hour race , u. a. with a former DTM Mercedes-Benz W 201 .

From 1999, significantly faster vehicles than before were allowed in the endurance races at the Nürburgring, after only relatively unspectacular near-series touring cars were allowed for years . Peter Zakowski then brought a Chrysler Viper GTS-R to the start, which the French team " ORECA " had set up according to GT2 regulations for the FIA ​​GT World Championship. In the 1999 season, the Viper won all races with superiority, after which this thoroughbred Gran Turismo sports car with the eight-liter V10 was slowed down by various measures by the regulations. The use of the Viper made the races more interesting for fans and thus also for sponsors; other teams also upgraded, especially with the variants of the new water-cooled Porsche 996 GT3 .

In 2003, Opel also competed as a works team and Abt - Audi with DTM vehicles and BMW with an M3 GTR V8. In contrast to these teams, the Chrysler Viper from Zakspeed was not allowed a tank capacity of 120 liters. Peter Zakowski, who had often appeared as a "rascal", first wanted to install a completely replaceable tank that would have significantly shortened the time for refueling stops (in contrast to the special high-pressure tank systems at the F1 come in long-distance races on the Nürburgring the normal, relatively slow fuel pumps are used).

After this tank change was prohibited for safety reasons or the regulations regarding the tank installation were changed (which also had consequences for other teams), Zakspeed brought the V10 racing car to the start as the " Dodge Viper" in order to comply with the special regulations for the "Chrysler Viper" to bypass. This was initially accepted when the vehicle pass was issued, but when the Viper refueled more than the permitted 90 liters in the race, penalties were imposed or the team was ultimately disqualified because of the wrong tank size.

In the following year 2004 Zakspeed used a “customer viper” in the VLN and in the 24-hour race. The drivers were Werner Mohr, Hans-Peter Huppert-Nieder and the two instructors from the Zakspeed Nürburgring racing school, Markus Großmann and Andreas Gülden (also known as "Viper-Andy"). However, the car broke down during the night after an oil pump defect and after a race to catch up it still achieved 112th place overall. In addition, a modified V8 star was used. This was driven by professionals Altfrid Heger , Sascha Bert and Donny Crevels , who in the end came in 23rd overall.

In 2005 the maximum displacement was limited to 6200 cm³ (3600 with turbo). Zakspeed reduced the number of cylinders to eight and in the VLN continued to rely on the "customer viper" with Werner Mohr, Dr. Hans-Peter Huppert-Nieder and Markus Großmann, who, reinforced by Andreas Gülden, also competed in the 2005 24-hour race together. However, the viper had a serious accident during the night. Later it turned out that the car was irreparably destroyed. In addition, Zakspeed used a Viper for the first time in 2005, which was officially supported by Dodge. With drivers Peter Zakowski, Robert Lechner and Sascha Bert, the team achieved third place overall behind the two works BMWs.

2006 didn't bring much that was new. The “customer viper”, which was now the car that reached third place overall in the 24 hours last year, drove the entire VLN season. Here Zakspeed booked the driver Werner Mohr, Dr. Hans-Peter Huppert-Nieder, Christopher Gerhard and Dirk Riebensahm had the greatest success in customer racing history at the 24 hours. Zakspeed was also back at the start at the factory. ORECA bought a Viper, and this year Peter Zakowski, Sascha Bert and Patrick Huisman also drove . However, the team retired early that night after temperature problems and a subsequent gearbox damage.

The year 2007 was again a very successful one. The customer viper started again in the VLN and 24-hour races. The red factory-supported Viper GTS-R achieved second place overall after a chaotic 24-hour race with drivers Duncan Huisman , Tom Coronel , Patrick Simon and Christophe Bouchut ; the customer Viper broke down early with engine failure.

For 2009 Zakspeed had prepared a Viper according to the new SP9 regulations, which achieved the fastest lap time in the first VLN race.

Driver in the DTM

Zakspeed occasionally takes part in historical events. In 2013 Zakspeed competed at the Goodwood Festival as well as the Oldtimer Grand Prix and the event at Schloss Dyck .

In addition to racing, Zakspeed also deals with the preparation of historic vehicles.

Zakspeed has been active in the ADAC GT Masters since 2012 . While they made a few guest starts in 2009 and acted as the operational and support team in 2012, Peter Zakowski decided on a permanent start in the ADAC GT Masters from 2014. Zakspeed occupied with driver Luca Ludwig - son of Klaus Ludwig at the end of the year eleventh place in the drivers' championship.

Only one year later ( 2015 ) Zakspeed managed to achieve the driver's title together with Sebastian Asch and Luca Ludwig .

In 2016, Zakspeed started with two Mercedes AMG GT3s for the first time , while in the two previous years they relied on the old model, the Mercedes-Benz SLS GT3 . While the driver pairing Asch / Ludwig contested the entire season, the Zakspeed youngster Nikolaj Rogivue had to alternately share the cockpit: first with Felix Rosenqvist , who switched to the DTM during the season , and then with Nicolai Sylvest. In the end it wasn't enough to defend the title. However, as newcomers, Nicolai Sylvest / Nikolaj Rogivue achieved some impressive podium positions.

In the 2017 season , Zakspeed also competed in the GT series again. The drivers were Luca Ludwig / Luca Stolz and Nikolaj Rogivue / Nicolai Sylvest , with Rogivue being represented at the Sachsenring by Yelmer Buurman .

In 2016 Zakspeed made several guest starts in the Blancpain GT Series Endurance Cup . At the home race at the Nürburgring, the driver trio Sebastian Asch , Luca Ludwig and Nikolaj Rogivue drove the Zakspeed Mercedes-AMG GT3 .

For the 2017 season Zakspeed is also planning to compete in the Blancpain GT Series Endurance Cup again.