Alberto Ascari (born July 13, 1918 in Milan , † May 26, 1955 in Monza ) was an Italian racing driver . He started in the automotive world championship ( Formula 1 ) in the early 1950s , where he was one of the most successful drivers with 13 Grand Prix victories and two world championship titles. Ascari had an accident in 1955 during a test drive. The Ascari chicane, a combination of corners of the Autodromo Nazionale Monza, was named after him .

Ascari was just seven years old when his father, Antonio Ascari , a well-known racing driver from the 1920s, was killed in a racing accident in Montlhéry . Nevertheless, Alberto decided to become a racing driver too. From 1937 he started on Bianchi - motorcycles , and in 1940 he came racing race car to his first, him as Enzo Ferrari the first he built cars for the Mille Miglia offered. This did not take place on the traditional Brescia - Rome - Brescia route , but on a circuit in northern Italy : nine laps of 167 km each . Ascari led in his class for a short time, but retired after a defect.

After the forced break caused by the Second World War , Alberto Ascari caused a sensation in 1947 when he finished second in a race in Cairo in which all drivers had identical Cisitalia cars. This placement ensured his commitment to Maserati , where he met his fatherly friend Luigi Villoresi . Together they contested many races for the Italian team, but often failed due to the unreliability of the car. In 1948 , Ascari was second in the Grand Prix of Great Britain behind Villoresi on a Maserati 4CLT / 48 of the Scuderia Ambrosiana . At the French Grand Prix in 1948 , he joined the Alfa-Romeo - factory team alongside Jean-Pierre Wimille and Consalvo Sanesi on a Tipo 158 on. Behind his two team-mates, Ascari took third place 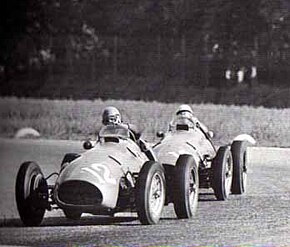 Alberto Ascari before Luigi Villoresi; both drive a Ferrari 500 at the 1952 Italian Grand Prix

From the 1949 season , Ascari and Villoresi drove for Scuderia Ferrari . Since the dominant team of the post-war period, Alfa Romeo, took a break in 1949, Ascari was one of the best drivers of the year with victories at the Swiss Grand Prix and the Italian Grand Prix .

In the 1950 season , when the drivers' world championship was held for the first time, Ascari in the Ferrari was not yet able to keep up with the regained Alfa Romeos, he finished fifth in the championship. However, he won several races that were not part of the world championship .

1951 Ascari celebrated his first victory in World Cup races, he won the Grand Prix of Germany and Italy and delivered with Juan Manuel Fangio a heated battle for the World Championship, which he by the wrong tire choice in the decisive race, the Spanish Grand Prix the on Circuit de Pedralbes lost in Barcelona .

Ferrari and Ascari completely dominated the seasons 1952 and 1953 , in which the World Cup was held according to the rules of Formula 2 . In 1952, Ascari won every world championship race in which he competed, with one exception: The 500 miles from Indianapolis , which Enzo Ferrari also wanted to win for PR reasons, failed because Ascari's car was eliminated after a spoke broke - the Americans, however already rode with modern magnesium wheels . In 1953, Ascari won five of the nine races and defended his world title.

At the end of 1953 there was a break with Enzo Ferrari, who wanted to dismiss Ascari's friend and teammate Villoresi. Ascari remained loyal to his friend and also resigned from the Scuderia.

Ascari and Villoresi signed with Lancia , which wanted to enter Formula 1 in the 1954 season . Since the car, the D50 designed by Vittorio Jano , was not finished until the end of the season, Ascari drove for Maserati at times without achieving any success. In the Lancia sports car, however, he won the world's most famous road race , the Mille Miglia . Lancia's debut at the Spanish Grand Prix was sensational: Ascari took pole position and led until lap 17 before retiring due to a defect.

The 1955 season should have been the breakthrough for Lancia. Ascari led the Argentine Grand Prix , but retired after an accident. After victories in two smaller races that did not belong to the World Cup, the Monaco Grand Prix came : after the leading Mercedes had retired, he was in the lead for a short time, but skidded at a chicane and fell into the harbor basin, from which he took off Sailors of the shipowner Onassis was recovered. Four days later he privately tested a Ferrari sports car in Monza . For some inexplicable reason, he went off the track, rolled over and suffered fatal injuries. There are various speculations about the cause. More recent statements suggest that he had to avoid workers who crossed the route carelessly.

With Alberto Ascari, motorsport lost one of its best drivers and one of the first to prepare for the races with physical training. Lancia, which also struggled with considerable financial difficulties, decided not to continue motorsport after Ascari's death and handed over the car and material to Ferrari in July 1955.

In 1950, Ascari and his driver colleague Luigi Villoresi played a key role in persuading Enzo Ferrari to give motorboat racing driver Achille Castoldi an engine from the Ferrari 375 F1 for his Arno XI project , with which Castoldi set a world record that is still valid today .