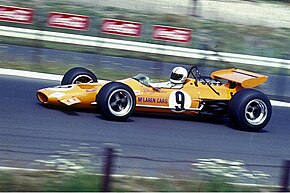 Denis Hulme at the Nürburgring, 1969

Denis Clive "Denny" Hulme (born June 18, 1936 in Nelson ; † October 4, 1992 in Bathurst , Australia ) was a New Zealand racing driver . The highlight of his career was winning the 1967 Formula 1 World Championship for the Brabham racing team.

After starting with near-series MG sports cars , Hulme's career began in 1959 as a professional racing driver with a two-liter Cooper Climax. From 1960 he drove in European Formula 2 . This was followed by races with a Cooper BMC Formula Junior and a job as a mechanic and test driver at Jack Brabham . At Christmas 1962, Hulme won the Brands Hatch Formula Junior race with a Brabham racing car.

In 1964 Hulme drove with Jack Brabham in the re-introduced Formula 2 and won in Clermont Ferrand and Zolder. At the end of the season he was second behind Jack Brabham in the French Formula 2 championship. He took part in a total of twelve Formula 2 races, in which, in addition to the two victories, he finished second six times.

Hulme's Formula 1 career began in Team Brabham in 1965 , the final year of the 1.5 liter formula. He scored five world championship points this season. In 1967 he won the Formula 1 World Championship on Brabham . In 1968 he switched to McLaren after driving a McLaren M6A in the CanAm in 1967 and winning the first three races of the series. Hulme took part in a total of 112 Grand Prix races, of which he won eight.

Besides Formula 1 went Hulme from 1967 bis 1971 , the 500-mile Indianapolis , where he was fourth in each of the first two years. In 1968 he only missed third place with an Eagle-Ford by 5 seconds. Hulme was most successful in the two-seater sports car and especially in the CanAm series, in which he won 21 races from 1966 to 1972 and was twice champion. His greatest success at Le Mans in 1966 was second place overall with a Ford GT 40 Mk. II together with Ken Miles .

In 1974 Hulme gave up his racing career, but returned to motorsport as a touring car driver in the mid-1980s . Among other things, he drove a Rover Vitesse by Tom Walkinshaw in the 1986 European Touring Car Championship , with which he won the race at Silverstone.

Hulme suffered a heart attack in a BMW M3 on October 4, 1992 during a touring car race ("Toohey's 1000 Miles") on the Mount Panorama Circuit . He still managed to stop the car. When the marshals reached the car, Denis Hulme had already died.

After his time as a fighter pilot in the Second World War, Hulme's father, Clive Hulme, ran an agency for tractors and a transport business in Te Puke . Denis Hulme worked as a teenager and young adult in a company that repaired all kinds of technical equipment. He drove his first races in 1957 as a 21-year-old with an MG TF 1500 that his father had given him. In 1964 Denis married Hulme. He and his wife had two children; the son had a fatal accident while swimming in 1980.

These statistics include all of the driver's participations in the World Automobile Championship, which is now known as the Formula 1 World Championship .