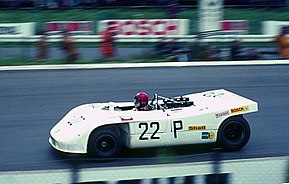 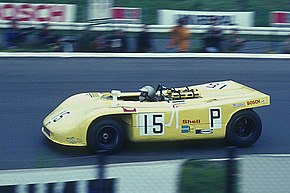 Third placed Nino Vaccarella in a Ferrari 512S Spyder (start number 55). In contrast to the conventional 512S, the Spyder had no roof 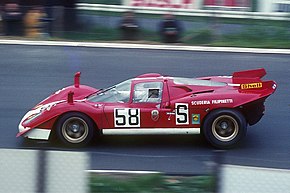 Jo Siffert in the Wyer-Porsche 908/03 with starting number 20. The car broke down after driving 22 laps without oil pressure 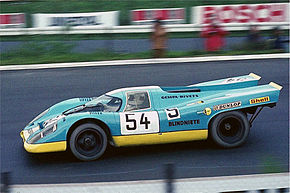 The only Porsche 917 at the start was the short-tail version from Helmut Kelleners (at the wheel) and Jürgen Neuhaus . Failure after 9 laps due to a damaged wheel bearing

The Porsche 911L from Franz Pesch and Georg Loos , who won the GT class with a displacement of up to 2 liters

Entrance to the south bend; in front the Alfa Romeo GTA by Peter Otto and Jörg Klasen, behind the Porsche 914/6 by Robert Huhn and Günther Schwarz

The World Sportscar Championship in 1970 was dominated by the German sports car - manufacturer Porsche . In 1969 , the Porsche racing department from Zuffenhausen won the brand world championship for the first time and went to great lengths to do so. In 1970 the sporting activities were severely restricted and the works outings were carried out primarily by John Wyer's racing team and the Porsche Holding from Salzburg . As in 1969, the Scuderia Ferrari cars were the toughest competition in the respective races.

The season began with a Porsche victory at the Daytona 24-hour race , driven by Pedro Rodríguez , Leo Kinnunen and Brian Redman in a Porsche 917K . Scuderia Ferrari's long lack of victory in the World Sports Car Championship ended with overall victory in the Sebring 12-hour race . The last success of the Italian racing team was more than 2 ½ years ago and dated from the sports car world championship in 1967 . At 1000 km race at Monza celebrated Lorenzo Bandini / Chris Amon and Mike Parkes / Ludovico Scarfiotti on Ferrari 330P4s a double victory. Bandini (at the Monaco Grand Prix in 1967 ) and Scarfiotti (the hill climb on the Roßfeldhöhenringstraße 1968) had an accident within a year fatal. Chris Amon left Scuderia at the end of 1969 and switched to March in Formula 1 . Mike Parkes, who had not raced for three years after his serious accident at the Belgian Grand Prix in 1967 , worked in 1969 as the Scuderia operations manager at the endurance race at the Nürburgring . In 1970 he made a comeback and returned to the ring as a driver for the Scuderia Filipinetti . The victory at the Sebring International Raceway went to Ignazio Giunti , Nino Vaccarella and Mario Andretti in the 512S .

After the 1000 km race at Brands Hatch , there were only wins for the Wyer-Porsche. Pedro Rodríguez and Leo Kinnunen won the Brands Hatch mountain and valley track in a Porsche 917K, who also won the Monza 1000 km race with this racing car model . The Targa Florio ended with the overall victory of Jo Siffert and Brian Redman in the Porsche 908/03 entered for the first time . Siffert and Redman also won the last race before the race on the Nürburgring-Nordschleife, the 1000 km race at Spa-Francorchamps .

At the beginning of the 1970 season, John Wyer’s racing team took over the works operations of the Porsche racing department. What was interpreted as an exclusive contract by the team around David Yorke , Ermanno Cuoghi , Peter Davies and John Horsman soon turned out to be a fallacy. The team of Porsche Salzburg received during the year equivalent technical support as the Wyer team, which made there for resistant displeasure. The collaboration between Zuffenhausen and Salzburg was the logical consequence of the family connection. The Porsche Salzburg owner Louise Piëch was the mother of the Porsche development manager Ferdinand Piëch and the sister of the managing director Ferry Porsche . In 1970 only a small department around Peter Falk and Rico Steinemann was active in Zuffenhausen, although it maintained solid racing operations. Competing in sports car races was not propagated as a works assignment and should not disrupt the work of Wyer and Porsche Salzburg, which meant that the 5-liter Porsche 917 could not be operated. The 3-liter long-tail versions of the Porsche 908 Spyder, owned by Hans-Dieter Dechent, were driven. Porsche took on the maintenance and use of the cars in the races with its own staff. At the Nürburgring two 908/02 were registered for the drivers Gérard Larrousse , Helmut Marko , Rudi Lins and Willi Kauhsen .

As in the previous year, Porsche rented the Nürburgring for a day of testing in 1970 before the race. In contrast to 1969, when you drove on the Südschleife , this time the test drives took place on the Nordschleife. During the trips, it should be clarified which vehicle model was faster on the 22.835 kilometer long racetrack. The Porsche technicians had developed a new racing car for the winding Piccolo circuito delle Madonie , on which the Targa Florio was driven. The Porsche 908/03 emerged from the Porsche 909 Bergspyder and was driven to victory in Sicily . Since the Nürburgring had a similar route profile as the Piccolo circuito, the question of whether the Spyder would also be faster on the ring than the 917 short tail had to be clarified. The decision was made in favor of the Spyder. The Porsche 917K were the faster cars, but in order to be fast they had to be driven consistently at the limit, which meant great physical effort for the driver. The 908/03 were much easier to drive and their 3-liter eight-cylinder engines had a much lower fuel consumption than the 5-liter Agreggate in the 917. This made it possible to save a refueling stop over the 1000 km distance. After the Targa Florio, the Spyder were brought back to Zuffenhausen and reassigned to the Porsche teams before the race. Jo Siffert and Brian Redman drove at the Targa with the 008 chassis, which Vic Elford and Kurt Ahrens received from Porsche Salzburg at the Ring . Siffert and Redman got 010, a newly built chassis. The second Wyer team - Pedro Rodríguez and Leo Kinnunen - drove with chassis 011, which was driven by Richard Attwood and Björn Waldegård in the Targa . Attwood drove at the Ring together with Hans Herrmann in the car with the chassis number 003, which had not yet been used.

Also Autodelta came for testing on the Nürburgring. Four Alfa Romeo T33 / 3s had been entered, but only Rolf Stommelen's and Piers Courage's car took part in the race. Scuderia Ferrari came to the track with three 512S, all of which were called Spyder because they had no fixed roof. The cars were driven by the teams John Surtees / Nino Vaccarella, Ignazio Giunti / Arturo Merzario and Jacky Ickx / Peter Schetty . Mike Parkes' teammate in the Filipinetti-512S was Herbert Müller .

Hans Laine , born in Helsinki in 1945, was the second Finn in 1970, alongside his close friend and compatriot Leo Kinnunen , to quickly celebrate success in the World Sports Car Championship. Laine drove sports car races for Racing Team AAW , the racing team of Finnish businessman Antti Aarnio-Wihuri . With his regular partner Gijs van Lennep , Laine usually started with a Porsche 908/02. The best place in the world championship was fourth place at the 1970 Targa Florio. The team also registered a Porsche 908/02 for Laine and van Lennep for the event at the Nürburgring. Laine had a fatal accident during Saturday training. On the long straight of Döttinger Höhe at Antoniusbuche level, the Porsche took off at high speed and overturned several times over the longitudinal axis. The car was completely destroyed in the impact, caught fire and burned out completely. Hans Laine perished in the flames. After the fatal accident, the team withdrew from Pauli Toivonen and Sten Axelsson's Porsche 917K . The third Racing Team AAW car, a Porsche 911S , started the race. The vehicle was owned by the German racing driver Dieter Fröhlich , who was looked after by the Finnish team's pit crew. Fröhlich contested the race together with Toivonen and won the class of GT cars over 2 liters with his team-mate in 14th place overall .

Peter Schetty also had a serious accident during training in the factory Ferrari 512S Spyder. Between the sections of the mine and carousel route, he lost control of the car on Friday, which overturned, deviated from the track and remained between trees on the roof. Schetty was very lucky and was not injured in the accident. However, the car was so badly damaged that a race start was not possible. Before Schetty, Jacky Ickx had driven a few laps with the Ferrari and then had to cancel the race. Ickx had fallen down a flight of stairs a few days earlier and had a bandaged hand that hindered him too much in the cockpit.

Jo Siffert set the fastest lap time in practice in a Porsche 908/03 with 7: 43.300 minutes and was only 1.2 seconds slower than Jacky Ickx on his pole position lap in the Brabham BT26A at the German Grand Prix in 1969 . There are no comparable times for the 1970 German Grand Prix , as this Formula 1 World Championship race was held at the Hockenheimring .

The course of the race

54 cars started the race on Sunday with Indianapolis start . Herbert Linge followed the field as 55th car on the first lap in a Porsche 914 provided by the organizer as a security vehicle . Pedro Rodríguez and Jo Siffert in the two Wyer-908/03 led the field in the beginning, followed by Ignazio Giunti in the best Ferrari and Vic Elford in the Porsche. The race for the factory Ferrari 512S with starting number 57 ended on the third lap when Giunti rolled out on the track due to a defective injection pump. Behind Rodríguez and Siffert, Elford was now in third place. John Surtees was fourth in the Ferrari ahead of Rolf Stommeln in the only 3-liter Alfa Romeo and Hans Herrmann in the second Porsche-Salzburg-908. At the 13th place was the Berta LR, one from a Cosworth - V8 engine driven Argentine mid-engine sports car from Oreste Berta ; at the wheel Luis Di Palma . On the fifth lap the car broke down with radiator damage.

In the lead, the two Wyer-Porsches drove up and away, and Elford in the Porsche-Salzburg 908/03 was also unable to set the duo's fast lap times. On the seventh lap, John Surtees unexpectedly drove to the Ferrari pit to have the steering wheel replaced, and lost valuable time in the process. On the ninth lap, Siffert took the lead and on the eleventh came to the pits to refuel and change drivers. Rodríguez and Elford also stopped on this lap. While Kinnunen and Ahrens left the pits without any problems, Redman was initially unable to start the Porsche that Siffert had taken over and was only back on track in third place. At kilometer 13, Kinnunen had an accident that tore the Wyer-Porsche out of the race. The car had lifted off on a hill and swerved on impact. After only one lap, Redman brought the Wyer-Porsche back into the lead and comfortably expanded it up to 22 laps. The only Porsche 917 in the field had retired on the ninth lap with a damaged wheel bearing, the Alfa Romeo on the eleventh lap with a defective shock absorber. At halftime, Redman came into the pits as the superior leader to refuel and to hand the Porsche back to Siffert. When Siffert wanted to drive off, the starter struck again. It wasn't until the mechanics connected two additional batteries that the engine started. But a whole lap was lost. A few kilometers later the car rolled out on the track without oil pressure. With the failure of both Wyer-Porsches, the Porsche-Salzburg-Wagen celebrated an undisputed double victory, with Elford / Ahrens ahead of Herrmann / Attwood. One lap behind, Surtees and Vaccarella finished third in their factory Ferrari 512S.

Here you will find teams, drivers and vehicles that were originally registered for the race but did not take part for a variety of reasons.

Commons : 1000 km race on the Nürburgring 1970  - Collection of images, videos and audio files

1000 km race on the Nürburgring