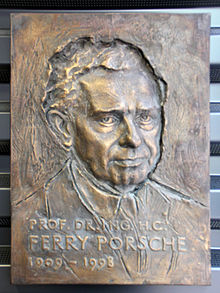 Ferry Porsche was born as the only son of the automobile designer Ferdinand Porsche . While his sister Louise (1904–1999) married the Viennese lawyer Anton Piëch and stayed in Austria, Ferry lived mostly in Stuttgart . After completing secondary school in 1928, he did a one-year internship at Bosch and then received private lessons on automotive technology for a year.

In 1931 Ferry joined the design office newly founded by his father. In 1932 he was responsible for the test monitoring and in 1934 for the test drives of the KdF car . The Reichsverband der Automobilindustrie (RDA) commissioned its development on June 22, 1934, with Ferry Porsche playing a key role. On July 30, 1935, he took over a ten percent share in Porsche GmbH from Adolf Rosenberger at nominal value. From December 14, 1937, he held a 15 percent stake in Porsche KG.

In December 1938, Porsche applied for membership in the SS . On August 1, 1941, he was accepted into the SS with the rank of Untersturmführer .

In 1940 he became deputy head of the company and in 1944 managing director. In 1944, due to increasing air raids, Ferry Porsche had large parts of the design office relocated to Gmünd in Carinthia , where, after a brief imprisonment, he began developing the 356 No. 1 Roadster in July 1946 . The inspiration for this came from the Turin-based company Cisitalia , which had commissioned Porsche KG with development contracts for a small tractor, a water turbine and a Grand Prix racing car. Cisitalia also made a small sports car with a Fiat engine.

The car was manufactured in the Porsche factory in Gmünd with simple means using Volkswagen parts. The shape of all important Porsche vehicles (round front headlights on convexly curved fenders, sloping rear, rounded rear window) - including the design language of the 911 - can still be traced back to the design of the 356 No. 1 Roadster personally designed by Ferry. In 1949 Ferry Porsche went back to Stuttgart and started series production of the Type 356 there .

Ferry Porsche's important achievement is the further development of his father's Porsche plant into an automobile production company. The Porsche company continues to build world-famous sports cars, including the 911 models since 1963 , whose lines were designed by Ferry's son Ferdinand Alexander .

The Porsche trademark was also designed under Ferry Porsche . The mixture of the coats of arms of Württemberg-Hohenzollern and Stuttgart creates a reference to the location of the plant. It is complemented by a crowning Porsche logo. Ferry Porsche once drew the first draft on a napkin during a stay in New York. Today it is one of the most famous trademarks in the world.

Ferry Porsche was the managing director of Drs until the Porsche family withdrew from operational management in 1972. Ing.hc F. Porsche KG . He then headed the Supervisory Board and was honorary chairman of the Supervisory Board until his death on March 27, 1998. In addition, together with his sister Louise, he owned the Porsche Holding in Salzburg, whose main business is still trading in vehicles of the Volkswagen and Audi brands , as well as their subsidiaries.

The graves of Ferry Porsche and his wife are in Zell am See , where their urns are buried in the house chapel of the bulk goods .

In 1965, the Vienna University of Technology awarded Porsche an honorary doctorate . In 1984 Baden-Württemberg made him an honorary professor and in 1985 the University of Stuttgart made him an honorary senator . In 1975 Porsche was honored with the Great Gold Medal of the Republic of Austria and in 1979 with the Great Federal Cross of Merit with a Star and the Wilhelm Exner Medal . Further honors included the Citizen Medal of the City of Stuttgart in 1989 , the Medal of Merit of the State of Baden-Württemberg in 1990 and the honorary citizenship of Wiener Neustadt in 1994 .

Since 2000, successful Baden-Württemberg high school graduates in mathematics / physics or mathematics / technology (at technical high schools and general education ) have received the Ferry Porsche Prize , which is intended to increase the attractiveness of the MINT subjects and motivate prospective students to study engineering , awarded.

In 2007 the Ferry Porsche Congress Center , which is named after him, was completed in Zell am See .