The Hohe Göll viewed from the Roßfeldhöhenringstrasse

The toll road leads over the Roßfeld , a northern branch of the Göll . The Roßfeld is located between the Salzach valley in the east and the Schellenberger valley in the west, which runs from Berchtesgaden to Marktschellenberg . In the south the Roßfeld is dominated by the Hohen Göll ( 2522  m ), in the north the Zinken joins it. The Panorama - ring road is about 16 km long, the largest slope is 13%. With a maximum of 1570  m above sea level. NN it represents the highest continuous road in Germany. The apex route runs partly on Austrian territory .

The toll part of the Roßfeldhöhenringstraße (internal administration B 999) is divided into the south access (also Purtschellerstraße), the apex and the north access: 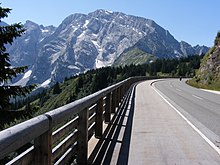 The summit with a view of the Göll massif

The district road BGL 9 to Oberau and from there a section of the federal road 319 to Klaushöhe on Obersalzberg , where the south approach begins, close the ring from the north approach downwards.

The access to the southern driveway is from Berchtesgaden via the B 319 (max. Gradient 26%). The north approach is reached from Unterau (on the B 305 between Berchtesgaden and Marktschellenberg). From there the B 319 leads up to Oberau, where the district road BGL 9 (Roßfeldstraße) connects. From Hallein , the northern driveway is reached via the Bad Dürrnberg district (Bad Dürrnberger Landesstraße) and after crossing the border via the Wildmoos municipal road.

The Roßfeldhöhenringstrasse was planned during the National Socialist era as part of a variant of the eastern end of the German Alpine Road . The alpine road should find its grandiose conclusion in the Unterau – Oberau – Roßfeld – Obersalzberg – Hinterbrand – Königssee route .

At the same time as Kehlsteinstrasse , the construction of the Oberau – Gmerk – Pechhäusl section on Roßfeldstrasse began in 1938 up to what is now the north toll station. In the war years the work was almost completed; The roads built from Oberau and Obersalzberg on the ridge of the Rossfeld were only 800 meters apart. At the initiative of the then District Administrator Karl Theodor Jacob , the Federal Ministry of Transport took over the merger of the two sections, including the completion of several kilometers of the shell section, between 1953 and 1955 and spent 3,173,000 DM on it. However, because the road had no supra-local importance and participation by the federal government was actually excluded, the “federal private road ” was invented. The collection of tolls should justify the expenses and cover them after the fact.

A state treaty was concluded with the Republic of Austria , since the apex stretch is on the Austrian side. According to the treaty, Austria allowed the Federal Republic of Germany to use and maintain the part of the road on Austrian territory . In addition, the contract contains, among other things, provisions on road construction , road traffic and liability law . The Federal Republic of Germany is registered under private law as the owner in the land register at the Hallein District Court for the road properties located on Austrian territory .

Since its completion, the federal private road can be used for a fee with private vehicles. As of 2020, 8.50 euros for cars, 5 euros for motorcycles and 60 euros for buses. In addition, a bus line operated by RVO GmbH operates on the scenic road .

The Hinterbrand – Königssee section of the loop formerly planned as the end of the Alpine road via Berchtesgaden was, in contrast to the section of the Rossfeldstrasse, no longer completed. The developed section ends at the Hinterbrand car park. The gap at the Zaunerbrücke bridge in the Obersalzberg – Scharitzkehl section, which was only temporarily connected until the 1980s, was led around the half-completed bridge in a curve that was more curved than originally planned.

In the past, motorsport was operated on the Roßfeldhöhenringstrasse ; As a reminder of the well-known Roßfeld races, vintage car races ( Roßfeld Historics ) are still held regularly today .

Today's name is Roßfeldpanoramastraße , after the spelling reform Rossfeld is also written, although geographical names were excluded. 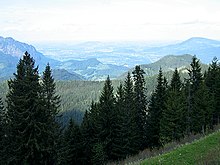 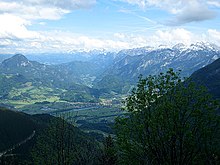 Golling an der Salzach, in the background Dachstein and Tennengebirge

From the Roßfeldhöhenringstraße there is a good view of neighboring Austria: to the north the view falls over Hallein to Salzburg and to the east over the valley of the Salzach to the mountains of the Salzkammergut (up to 1782  m ) with the Osterhorn group and to the Tennengebirge (up to 2430  m ) The Dachstein Mountains (up to 2995  m ) can be seen in the southeast .

On the southern driveway, above the Untere Ahornalm, just before the Regerkurve, there is a pass with a beautiful view. Another, very sunny vantage point is located between the beginning of the north approach and Gmerk on the so-called Leiten.

Since around 2015, an approximately 500-meter-long nature trail has been available between the upper parking lots, on which attention is drawn to special alpine plants, information boards provide information about the surrounding mountains and about the Roßfeld race that started here in the 1970s.

In winter several ski lifts are operated on the Roßfeld as well as a ski shuttle bus from Oberau to Roßfeld.

From summer 2005 the Berchtesgadener-Land-Rad-Marathon, which included the entire district, ran along the Roßfeldhöhenringstrasse. This cycling event is no longer organized here.

The Roßfeld races are legendary and were completed in 1970 with a few racing cars on a section of the road. The tradition was revived in the 2010s and is now being done by classic cars.