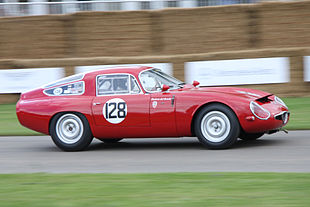 A Ferrari Dino 166SP, here in the 1000 km race at the Nürburgring in 1965 with Lorenzo Bandini at the wheel. At Le Mans, Giancarlo Baghetti and Mario Casoni drove a Dino 166SP; Failure after two laps due to engine failure.

After the significant defeat in 1964 , those responsible at Ford reorganized the activities of the racing team. The most important decision was the commitment of Carroll Shelby . The former racing driver Shelby, who had won the endurance race on the Sarthe in 1959 as a driver, was now a racing team owner. In his Shelby American Incorporation , AC Cobra were mainly used. Shelby had the previous 4.2-liter engines replaced by the 4.7-liter V8 engines from the Cobras. In addition there were two new GT40 Mk.II, each equipped with 7-liter units. Ford Motorsport Director John Wyer managed to place two more GT40s in the private teams of Georges Filipinetti and Rob Walker . So there were a total of six GT40 at the start, because the sixth car was registered by Ford France. This vehicle driven by Maurice Trintignant and Guy Ligier was a one-off and the only GT40 roadster ever to be used at Le Mans.

The factory team Ferrari brought two new P2 to Le Mans. In addition to a Spyder body, these new prototypes also had new DOHC V12 engines. There was also a 3.3-liter 275P2 and a 6-cylinder Dino with a 1.6-liter engine. The customer version of the Ferrari P-types, the 365 with the same chassis but less power, was delivered to the British racing team Maranello Concessionaires by Ronnie Hoare and the North American Racing Team by Luigi Chinetti .

The 250LM , developed in 1964, had the 3.3 liter engines from the Ferrari 275 GTB . In the literature, these vehicles cause irritation, especially in connection with the Le Mans race. According to Ferrari's typology, the car should actually have been referred to as the 275LM, analogous to the 275 GTB. This is why this term is used in some statistics. However, the 250LM was based on the Ferrari 250P and was officially designated as such by Ferrari. Since Ferrari could not produce the 100 pieces required for homologation in the GT class, all of the privately registered cars had to compete in the prototype class.

The course of the race

After the obligatory Le Mans start , Chris Amon came in the Shelby MK. II as the leader from the first lap back to the start and finish. Behind another Ford, Joseph Siffert was in third place. Siffert drove the Maserati Tipo 65 , which Maserati had developed for the French company representative Johnny Simone . But Siffert only got three laps, then he had an accident and had to give up. This racing car is the last Maserati to be used in the 24-hour race to this day.

After two hours of racing, three Fords had already retired when Chris Amon pitted with clutch problems. Took the lead Ken Miles , of a Ford cockpit with him Bruce McLaren said. For Ford, however, the race turned into a debacle. All of the cars were out of the car just after midnight. Ferrari fared not much better, all works cars were lost by Sunday morning. When last year's winner Jean Guichet retired with a gearbox damage after driving 315 laps, a duel between two private Ferrari 250LM for victory developed.

One vehicle was used by the North American Racing Team and was driven by Masten Gregory and Jochen Rindt . At the beginning, the vehicle was given little chance of reaching the target. In his young racing driver years, Jochen Rindt was considered to be particularly material-killing, and his driving style seemed almost impossible to get through. The second 250LM was reported by Frenchman Pierre Dumay , who shared the cockpit with Belgian Taf Gosselin . On Sunday, almost two hours before the end of the race, this 250LM was safely in the lead when Gosselin had a puncture at the end of the Les Hunaudières straight. The tire exploded and destroyed the body on the rear of the car. Gosselin brought the car back to the pits, but the tedious repairs lost seven laps. To everyone's astonishment, the Rindt-Gregory-Ferrari was now at the top. But this car also had technical problems. The starter in particular made difficulties, which turned every pit stop into a gamble. In the end, however, Rindt and Gregory won with a secure five-lap lead over the Belgian Ferrari. To date, it is the last overall victory for the Italian sports car brand at Le Mans.

The American Ed Hugus was a reserve driver for the North American Racing Team. According to the regulations at the time, each racing team was allowed to nominate a substitute driver for all vehicles used. This could then be used if it was clear before the race that one of the drivers was not allowed or could not start for health reasons. However, like so many in motorsport, these regulations were not formulated precisely enough. So it remained unclear whether the substitute driver could also be used during the ongoing race. The only thing that was clearly regulated was that a driver who had left in an accident could not be replaced.

Just before 4 a.m., Masten Gregory pitted out of the blue. Gregory, who was very nearsighted and also wore his glasses in the cockpit, had got smoke in the car and in his eyes. Like every year, hundreds of barbecues were going on around the track all night long. The resulting smoke moved like fog over the route and often hindered the drivers. Unfortunately, Jochen Rindt was not in the pits - his next assignment was not due for two hours later - and nobody knew where he was. But Ed Hugus was present, who quickly put on Gregory's helmet and drove his stint to an end. This remained hidden from a broad sports public for decades. Hugus himself first clarified the situation in a letter in 2005. Hugus was neither present at the award ceremony, nor was he in the official result list. However, pictures from 1965 show Hugus standing in front of the winners' stand. There is also a rumor that the American, hindered by the crowds, did not make it to the ceremony in time, despite the help of two gendarmes. Years after the race, Luigi Chinetti told Hugus that although he had reported the incident to the ACO officials, they were not very interested in the situation. The French journalist Christian Moity, editor of various books on the 24-hour race, contradicts this view in a publication. Chinetti would have had every reason to keep quiet about the driver change, as the risk of disqualification would have been relatively high. Hugus has to do without the honor of winning the 24-hour race to this day. Although his name has found its way into the winners' lists of recent publications about Le Mans in recent years, the official result from 1965 has not been changed until today.

Here you can find teams, drivers and vehicles that were originally registered for the race, but did not take part for various reasons.