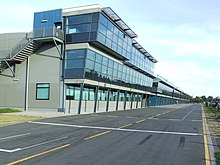 The pit lane of the Albert Park Circuit

The Albert Park Circuit is a semi-permanent motorsport racetrack in Melbourne, Australia . The track was in 1996 opened and released the Adelaide Street Circuit as the venue of the Australian Grand Prix of Formula 1 from. The length of the route is 5.303 km. The pit lane is 280.1 m long. Roads are used as the race track, which circle the artificial lake of the same name in Melbourne's Albert Park ( Port Phillip City ) and are closed to public traffic on the respective Grand Prix weekend. The infrastructure, which is important for the race, is rebuilt every time in the three months before the event and dismantled in the six weeks after the race, because only the start and finish straight with the pit system is permanent.

The current contracts provide for races in Albert Park up to and including 2019. After tough negotiations, the state government of Victoria and the FIA ​​had agreed on a start time of 5 p.m. Eastern Australian Standard Time (AEST) (7 a.m. Central European Time (CET) , or 8 a.m. Central European Summer Time (CEST) ) to better serve the European fans to reach. Artificial lighting should be avoided. The Grand Prix on the Albert Park Circuit usually represents the season opener race of a year. The 2017 season opener took place on March 26th. At the start of the season on March 4, 2001, the marshal Graham Beveridge died after being hit by a flying wheel that had come loose in a collision between Jacques Villeneuve and Ralf Schumacher . The 2020 Australian Grand Prix was canceled due to the COVID-19 pandemic in April of that year.

All winners of Formula 1 races in Melbourne