This article describes people who practice sports. For the design of motorcycles, see super athletes .

As a sportsman or sportswoman , a person is called, the regular and intensive one or more sports operates. Professional athletes are to be distinguished from amateur athletes , because they earn income by participating in competitions and are under contract with a club or organization.

Gymnast on the balance beam 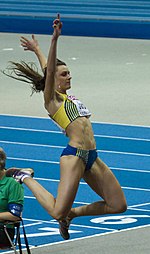 The term “ athlete ” is derived from the term “sport”. From Old Latin dēportāre (' bring away, carry away, carry away', late Latin also 'amuse, amuse'), the basic term as disport ('pastime') or to disport ('have fun, entertain oneself, be exuberant') initially came into the French and English and in the first half of the 19th century through apheresis also into German. The English word " sport " (originally "pleasure, short-time") gradually took on the meaning of "competitive physical exercise".

The suffixes “–er” or “–ler” serve as a linguistic means to form a so-called “ Nomen Agentis ”, ie a person designation. While the ending “-er” meant a serious marking and is still used today in words such as “Handwerk-er”, “Arbeitschaft-er”, “Wirtschaft-erin” or “Wissenschaft-er”, the variants with the apply Suffix "-ler", as the language critic Karl Kraus pointed out, as a so-called pejorative , an expression used in linguistics that means something like "derogatory" or "derogatory". and is usually perceived as stigmatizing : Designations such as “craftsperson”, “intelligentsia”, “trade unionist” or “economist” are perceived as offensive. This devaluation was originally intended with the word formations "scientist", "fraternity-ler" and "sport ler". Some expressions are still in use today in both variants, such as the term “Wissenschaft-er”, which is preferred in Switzerland and Austria. An even increased depreciating tendency can be seen in other word formations such as "begging", "tinkering", "sporting", "working hard" and in the verb forms "work", "sport", "create".

From the derivation (derivation) "Sport-ler", the feminine form of "Sport-ler-in" emerged via a further suffix and through the formation of compound words for the active people in the numerous sports and sports areas, such as "Skisporter", " Water sports enthusiasts "," air sports enthusiasts "as sport-related derivatives or" amateur athletes "," professional athletes "," top athletes "as performance variants.

While in the German-speaking area the language education "sportsman", used as a polemical battle term, quickly spread and eventually even became the dominant term, in England the word Sportsman , for which there was no female equivalent , was used as a general term for a person who did sport. But also in German texts there was the word “Sportsmann” corresponding to the English word profile with the plural formation “Sportsmen”. A female language variant was not common in German either.

In contrast to the expression “athlete”, the word profile “sportsman” is also found almost consistently in German texts with positive connotations , for example in the well-read novelists Hans Fallada and Ludwig Ganghofer . In contrast to the ostracized athlete, the “sportsman” appears here as an “impeccable”, “exemplary”, “great”, “fair”, “sympathetic” person who deserves respect.

The term sport, which originated in England in the 18th century , originally referred to the specific form of physical activity practiced for fun that was customary there. The person who ran it was called a “ sportsman ” and had a positive reputation .

On the mainland, however, the English sporting activity stuck to the odium of exclusivity, characterized by the fact that it was initially reserved for an elitist class and aristocratic class. Historically, it also developed in competition with “ gymnastics ”, which originated in Germany, is nationally shaped and accessible to all social classes, and its different ideology . Accordingly, it was frowned upon on the continent, especially under the powerful influence of Friedrich Ludwig Jahn 's patriotic form of "gymnastics" and the corresponding gymnastics movement .

In this ideological dispute, a combative and often agitational defense of the English sporting ideas, which manifested itself in the designation " athlete " and other disparaging words, established itself, especially from the circles of the gymnastics community .

In stark contrast to German gymnastics, English sport was competition and record-oriented. In contrast to gymnastics, he did not want to serve a friendly leisure time with educational aspirations, but rather saw himself as an institution representing the emerging competitive society.

The typical English type of physical activity was noted on the mainland by neutral observers with incredulous astonishment and amazement. For example, the Austrian writer and journalist Michelangelo von Zois noted in his much-read book about cycling from 1908:

"[...] Men who came from England knew how to tell their astonished friends that the people across the canal, however sensible they might otherwise be, indulge in childish amusements. Young people talk about pushing a leather ball around in a meadow, others hit the ball over a net with a kind of praker, etc., and this madness attracts crowds of spectators. Among them there are people in office and dignity - who sometimes do not even disdain to participate themselves. "

The gymnastics teacher Max Planck, who was heavily involved in the conflict of ideologies, formulated and polemicized more drastically in his pamphlet from 1898 with the title “ Fusslümmelei ”. In addition to the caricature of an English athlete shown on the cover , he also vehemently opposed “Anglomania” and the “aping of foreign customs”, which threatened to spread to the mainland, in his book text. The diatribes of contemporaries against the "uncouth", "rough" and "dangerous" athletes of the island and the corresponding illustrations focused particularly on the prime example of "foot slouching", in which people kicked, jostled and pushed. A number of these historical caricatures of the despised athletes from the years 1721, 1810, 1871, 1898, 1900 and 1908 and a reception of Planck's book can be found in a magazine article by Siegbert A. Warwitz and in a work by the sports historian FK Maths.

The originally negative connotation of the expression “athlete” was forgotten over time, when the sports movement gradually prevailed against the gymnastics movement on the mainland and established its performance and competition-oriented principles. The French Baron Pierre de Coubertin had a decisive influence on this with his attempt to revive the ancient Olympic idea , which he provided with the motto " Citius, altius, fortius " ( faster, higher, stronger ) and thus the athletic model of antiquity and the English achievement principle and record ideas imitated. The term sport and the people involved in sport were subsequently subsumed under the term athlete in all areas, including mountain sports, water sports, air sports and the competing currents of Swedish gymnastics or German gymnastics . The designation lost its derogatory meaning. Today, gymnasts, gymnasts, mountaineers, canoeists, parachutists and paraglider pilots are all united under the collective term "athletes". In compound terms, they are understood in a neutral way according to their respective sports equipment as skiers, cyclists or canoeists, according to their level of demands as high-performance athletes, recreational or amateur athletes, according to the area of ​​their sporting activity as water sports enthusiasts, mountain sports enthusiasts or air sports enthusiasts, according to their status as professional athletes or amateur athletes and for other special features, e.g. B. as disabled athletes, individual or team athletes.

The terms “ athlete ” (traditional term from ancient Greece for a competitor) and “sportsman” (literal translation of the English-language designation for a male person engaged in sport) are used as synonyms with a meaning that is approximately comparable to the word “athlete” .

(mocking the thought: "They are not doing anything serious")