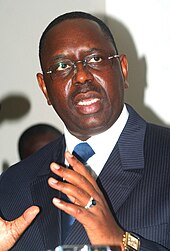 Sall studied geology . He is married and has three children.

Sall began his political career in the Senegalese Democratic Party , where he rose quickly. Until 2002 he was Mayor of Fatick , then Minister for Mining, Energy and Water Management (2001-2003) and from 2003 to 2004 Minister of the Interior. On April 21, 2004, after the dismissal of Idrissa Seck, he was appointed Prime Minister by President Abdoulaye Wade . He held this office until June 19, 2007. From June 2007 to November 2008 he was President of the National Assembly of Senegal .

As President of the National Assembly, Sall invited President Karim Wade's son to a hearing in Parliament. The background was allegations of corruption regarding the organization of the Islamic World Conference in Dakar by Karim Wade. As a result of this subpoena, Sall and President Wade broke up. Sall had to give up his position.

In April 2009 Sall was again Mayor of Fatick. He left the Democratic Party of President Wade and joined the Alliance pour la République (APR-Yaakaar).

In Senegal's 2012 presidential election , Sall ran for the APR Yaakaar. In the first ballot on February 26, 2012, he surprisingly received 26.6 percent of the votes cast and thus achieved the second-best result behind incumbent Abdoulaye Wade, who received 34.8 percent of the votes. In the runoff election on March 25, 2012 Sall won with 65.8% of the vote, Wade admitted his defeat. On April 2, 2012, Macky Sall took the oath on the Constitution of Senegal as President of the Republic before the Constitutional Council and took office in the presence of numerous state guests and public figures.

On September 1, 2013, Sall dismissed Prime Minister Abdoul Mbaye and the entire cabinet without giving reasons. The previous Minister of Justice Aminata Touré took over the office of Prime Minister. On July 6th, he appointed Mahammed Boun Abdallah Dionne as her successor. After the elections to the 13th National Assembly , he reappointed Dionne as Prime Minister on September 6, 2017 and entrusted him with forming a government .

In the 2019 presidential election , Sall was confirmed in office for another five years in the first ballot with 58.3 percent of the vote. On April 2, 2019, he took the oath of office for his second and constitutionally last possible term of office before the Constitutional Council in the presence of 18 African heads of state and government in the conference center of Diamniadio .

In August 2019, Sall, as the current President of NEPAD , took part in the G7 summit in Biarritz 2019 , along with several other African heads of state . His main concerns were the North-South conflict and in particular the fight against tax evasion and tax fraud by the large international corporations engaged in Africa, which would ruin the continent financially.