Léopold Sédar Senghor in 1961 in Frankfurt am Main

Senghor was the son of a wealthy landowner and merchant from the Serer people . His Roman Catholic mother, a Fulani , sent him to a Catholic mission school and seminary where he was to be trained as a priest . At the age of 20, he broke off his education and put his Abitur at a non-denominational school in Dakar from.

In 1928 he went to Paris to study. In 1933 he founded the Association of West African Students. He studied European literature in depth and in 1935 was the first African to obtain an agrégation in classical philology. He had meanwhile become a French citizen . As an author of poems and appeals, he founded the Négritude trend with Aimé Césaire and other Afro-French intellectuals . In 1940, as a simple soldier in the French army, he was taken prisoner by Germany and narrowly escaped being shot together with other black soldiers. As a prisoner of war he read a. a. Writings of Leo Frobenius , which should influence his further development of the concept of negation . After the liberation, he initially worked as a high school teacher again, but was elected to the French National Assembly in 1945 as a member of the SFIO for the new constituency Senegal-Mauritanie . In 1946 he married the daughter of the Governor General for French Equatorial Africa Félix Éboué . In 1948 he became a co-founder of the moderate left Bloc démocratique sénégalais and from 1951 State Secretary. He remained one of the most important political figures in the Union française until its end. Senghor was chairman of several interterritorial parties in Africa: the Convention Africaine (1957-1958), the Party of the African Union (1958-1959) and the Party of the African Federation (1959-1960).

In 1950 Senghor became friends with the German writer Janheinz Jahn , whose publications decisively changed and modernized the (West German) image of Africa. 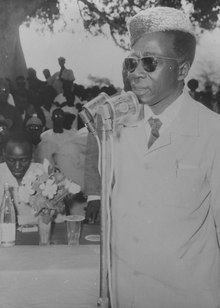 After Senegal's independence in 1960, Senghor was its first president until 1980. He was a staunch Christian in a predominantly Muslim country and a representative of African socialism, in which African values ​​are anchored; for him the focus was on people.

In the run-up to the award of the Peace Prize of the German Book Trade , there was public protest in Frankfurt am Main in 1968 . Senghor is an "African ideologist of colonialism and neocolonialism ". Before that, there had been a general strike in Dakar in May 1968 , during which the army and police intervened. The later leader of the Greens in the European Parliament Daniel Cohn-Bendit was sentenced to eight months in prison on probation after this demonstration, which was reduced to 6 months in the second instance.

In 1974 the Club of Rome met in Salzburg's Klessheim Palace at the invitation of the then Austrian Chancellor Bruno Kreisky to discuss the limits of global growth. Senghor also attended this meeting. Due to his international reputation and against the background of his interest in Rainer Maria Rilke , Georg Trakl and Wolfgang Amadeus Mozart , the then Governor of Salzburg Wilfried Haslauer senior invited him on behalf of the state government to give the speech at the opening of the Salzburg Festival . Léopold Sédar Senghor accepted this invitation and opened the Salzburg Festival in 1977 with a speech entitled “Austria as an Expression of World Culture”.

In 1978 Senghor invited the sculptor Arno Breker, respected in Paris, to visit Africa. Senghor dedicated a manuscript of his poem “Prayer To Masks” to the sculptor. The artist portrayed Senghor at the start of an Africa cycle.

On December 31, 1980 Senghor resigned in favor of Prime Minister Abdou Diouf from office.

Critics accused Senghor of orienting himself too much towards Europe culturally and politically and of trying too little to build an independent African identity. In addition, he had originally even tried to bind Senegal more closely to France, and when this seemed impossible, he nevertheless sought reconciliation with France, because after 1927 there had been tensions in the social class of the Sujets Français , which he did not appeared conducive.