Werner Richard Heymann (born February 14, 1896 in Königsberg ; † May 30, 1961 in Munich ) was a German composer and conductor . He is considered one of the most important music creators of the Weimar Republic . 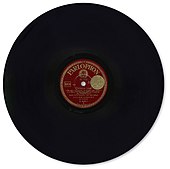 Song extraction with Christel's song from the film The Congress Dances .

Max Brode , the director of the Königsberg Philharmonic , gave him his first music lessons . Heymann already appeared in this orchestra as a violinist at the age of 12. In 1912 he moved to Berlin with his parents . There he attended the Royal College of Music; his teacher was Paul Juon . After the beginning of the First World War , he became a soldier for a short time - until he was released due to illness.

After a short stay in Vienna , he began to work as a composer with various Berlin cabarets. a. with the cabaret "Schall und Rauch", whose director at the time was Max Reinhardt . Heymann took over the management of the cabaret. In the mid-1920s , through the mediation of Erich Pommer, he took up the position of assistant to the general music director of the UFA . A short time later, in 1926, he was promoted to general music director himself. His area of ​​responsibility in this position included the compositions and arrangements of silent films . The replacement of the silent film by the sound film was very helpful to Heymann in view of his musical background and laid the foundation for his later works, with which he was to gain international recognition.

In 1933 he was fired from the UFA because of his Jewish descent. He emigrated - first to Paris , then tried to find a new home and place of work in Hollywood , but this failed. He therefore returned to Paris and later went to London . At the end of the 1930s he went to the USA again. This time he managed to gain a foothold there. In Hollywood he composed numerous film scores, including a. for the Ernst Lubitsch films Ninotschka with Greta Garbo and To Be or Not to Be . He has been nominated for an Oscar several times , including a. for the soundtrack for the film Bluebeard's eighth wife , which was made in cooperation with Friedrich Hollaender .

In 1951 he returned to Germany, where he continued to devote himself to composing and in 1957, after a culture test, regained German citizenship. His fourth marriage was the actress Elisabeth Millberg, with whom he had a daughter, Elisabeth Charlotte Trautwein-Heymann (born November 3, 1952). Heymann died in Munich in 1961. He is buried in the Munich forest cemetery (new part).

The filmmaker Helma Sanders-Brahms portrayed him, his work and the period of his greatest successes in 2012 in her last film work, the documentary So Wie ein Wunder - Das singende Kino des Herr Heymann .

His older brother was the legal trainee and writer Walter Heymann (1882–1915).

In 1957, six years after his return, Heymann applied to regain German citizenship. At the naturalization authority in Bavaria , he was then asked, among other things, whether he had knowledge of German culture and, for example, could sing a German folk song. Thereupon he is said to have only agreed once , without saying a word about his authorship. Heymann received German citizenship.