Gröhe was Federal Chairman of the Junge Union from 1989 to 1994 , has been a member of the German Bundestag since 1994 and was Minister of State for Chancellor Angela Merkel from October 2008 to October 2009 . On October 28, 2009 he was elected Secretary General of the CDU in Germany by the CDU federal executive committee. He held this post until his appointment as Federal Minister in December 2013. Since March 20, 2018, he has been deputy chairman of the CDU / CSU parliamentary group and since June 6, 2018, he has also been a member of the “Reliable Generation Contract” pension commission set up by the federal government. . Since January 30, 2019, he has been co-chair of the mediation committee of the Bundestag and Bundesrat. Its co-chair is Manuela Schwesig (SPD), Prime Minister of Mecklenburg-Western Pomerania.

After graduating from the Quirinus-Gymnasium in Neuss in 1980 , Gröhe studied law at the University of Cologne , which he completed in 1987 with the first state examination in law. He then worked until 1993 as a research assistant or research assistant with Martin Kriele at the seminar for state philosophy and legal policy at the University of Cologne. After completing his legal clerkship , he also passed the second state examination in 1993. He has been admitted to the bar since 1994 . His admission to the bar has been suspended since his appointment as Federal Minister of Health in December 2013. 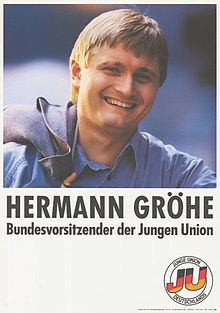 Hermann Gröhe on a poster of the Junge Union 1990

Hermann Gröhe is a guest on the state executive committee of the CDU North Rhine-Westphalia.

On October 24, 2009, the CDU federal executive nominated Gröhe unanimously as acting CDU general secretary, which was confirmed by the federal committee on March 21, 2010. He thus succeeded Ronald Pofalla , who moved to the black and yellow government of Chancellor Angela Merkel as Minister of the Chancellery. In November 2014, Gröhe again applied to succeed Ronald Pofalla in a party office. In the election for the chairmanship of the powerful CDU district association Niederrhein, however, he was defeated by Günter Krings , who received three more votes.

In December 2014, Gröhe had the prospect of moving into the CDU presidium in the second ballot. However, he withdrew his candidacy on the grounds that a quota for women should be maintained. For it was Emine Demirbüken-Wegner selected. He is an elected member of the CDU federal executive committee . In addition, Gröhe was one of the co-founders of the so-called (black-green) pizza connection . Regarding the group that existed at the time, Gröhe once said: "I was invited to weddings by green friends when some in the CDU still thought that the Greens would never get married."

On October 1, 2008, Gröhe succeeded Hildegard Müller as Minister of State to the Federal Chancellor ( Merkel I cabinet ). After being elected as CDU general secretary, he resigned in October 2009.

On December 17, 2013, Gröhe was appointed Federal Minister of Health in the Merkel III cabinet by Federal President Joachim Gauck . Gröhe held this office until March 2018.

In an interview with FAZ (published January 20, 2014), Gröhe spoke out in favor of a ban on all forms of organized assisted suicide .

Gröhe has announced that it will shorten the waiting time for specialist appointments for those with statutory health insurance and found a new quality institute with which the treatment success of clinics and practices can be better compared.

In 2014, Gröhe refused to dispense the “ morning-after pill ” without a prescription , although an expert committee of the Federal Institute for Drugs and Medical Devices and the World Health Organization had spoken out in favor of it. This brought him criticism from his own coalition partner. Karl Lauterbach accused Gröhe of “patronizing women” who “were denied the exercise of their rights in an emergency”.

In 2016, Gröhe promoted the acceptance of drug tests on people with dementia. Before the onset of the disease, they should state in an advance directive that they would like to participate in studies. An additional prerequisite is that the legal representative has expressly consented to a specific study participation after medical advice.

From 2000 to 2009 he was co-editor of Chrismon magazine . Gröhe has been a member of the board of the Konrad Adenauer Foundation since 2001 . In December 2017, Gröhe was unanimously elected (with effect from January 1, 2018) as one of the three deputy chairmen of the foundation.

Since April 2013 he has also acted as patron of the MoveForwardProject , which lasted until December 2013, and campaigned for the support of sustainable education in Africa. Since 2014 he has been the patron of Crazy? So what! , an adolescent mental health support project.

Hermann Gröhe is a Protestant , married and the father of four children. About his faith he said in 2009: “Faith in Jesus Christ gives me stability in life and - I hope - also in death. I would never say that of a party platform. "

Health Minister of the Federal Republic of Germany

see also: Office holder since 1961 of both German states

General secretaries of the CDU

Federal chairwoman of the Junge Union