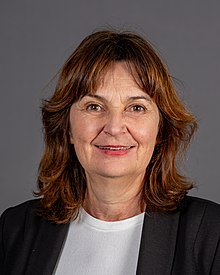 Mechthild Heil (born Hull * 23. August 1961 in Andernach ) is a German politician of the CDU and architect . She has been a member of the German Bundestag since 2009 and was the consumer protection officer of the CDU / CSU parliamentary group from 2013 to 2017. Heil has been chairwoman of the committee for building, housing, urban development and municipalities since 2018.

After graduating from the Bertha-von-Suttner-Gymnasium in Andernach, Heil studied architecture at the University of Kaiserslautern . She completed her studies with a degree in engineering. From 1989 to 1990 she worked for architects RKW in Frankfurt and from 1991 in Andernach in the architects' office Rumpf. Since 1999 she and her brother have been running the family business "RUMPF architects + engineers" in Andernach with fifteen employees.

Heil is a Roman Catholic , married and the mother of three sons.

In 2009, Heil was elected to the German Bundestag for the first time in the Ahrweiler constituency with 45.5 percent of the first votes.

On September 20, 2012, Heil was nominated by the delegates' assembly of the two CDU district associations Mayen-Koblenz and Ahrweiler with 124 of 134 votes as a direct candidate for the 2013 federal election. In the election on September 22, 2013, she again won the direct mandate of constituency 199 for the Bundestag with an increase of ten percentage points to 55.5 percent of the first votes . Her opponent from the SPD , Andrea Nahles , received 28 percent of the first votes.

In the 2017 federal election, Heil won the direct mandate in the Ahrweiler constituency for the third time with 42.8 percent of the first votes .

In January 2014, Heil was appointed by the parliamentary group leader Volker Kauder as consumer protection officer of the CDU / CSU parliamentary group. She already held this office in the previous electoral term and held it until the 2017 federal election.

Heil has been a member of the CDU's federal executive committee since December 2016 .

In April 2018, Mechthild Heil was appointed chairman of the committee for building, housing, urban development and municipalities of the German Bundestag.

She is also vice-president of the DRK district association Mayen-Koblenz and a member of “Aktion Eine Welt” in the hospice movement Andernach-Pellenz, the Andernach carnival society Fidelitas 1893 “Blaue Funken” eV and a pilgrim with the Matthias Brothers .