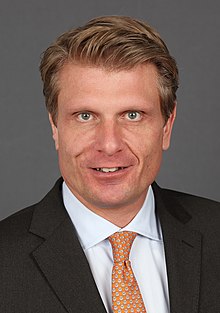 Thomas Bareiß (born February 15, 1975 in Albstadt - Ebingen ) is a German politician ( CDU ) and has been a member of the German Bundestag since 2005. He has been Parliamentary State Secretary at the Federal Minister for Economic Affairs and Energy since March 2018 . He has also been the Federal Government's Tourism Commissioner since April 2018 and the Federal Government’s Commissioner for SMEs since April 2020. He has been a member of the CDU federal executive committee since December 2018 .

Bareiß is Protestant . He has been married to the former North Rhine-Westphalian member of the state parliament Andrea Verpoorten since September 2016 and lives with her in Balingen .

After graduating from high school in 1994 at the Albstadt Business School, Bareiß did his military service with the Air Force in Meßstetten and on the Heuberg . In 1995 he began studying business administration at the Ravensburg University of Cooperative Education , which he completed in 1998 with a degree in business administration (BA). From 1999 to 2005 he worked as an assistant to the management, head of the controlling department and most recently as head of the IT and organization department in a medium-sized textile company in the Swabian Alb.

On October 22, 2011, Thomas Bareiß was elected in Uhldingen-Mühlhofen as the new chairman of the CDU district association of Württemberg-Hohenzollern, which has around 13,000 members. He narrowly won against the then Environment and Transport Minister Tanja Gönner . He was re-elected unopposed in 2013, 2015 and 2018 (with 99%, 95.1% and 93.8% of the vote, respectively).

In December 2018 he was elected to the CDU federal executive committee.

From January 2010 to 2018, Thomas Bareiß was the coordinator for energy policy of the CDU / CSU parliamentary group and member of the parliamentary committee of the CDU / CSU parliamentary group. He is also deputy chairman of the Baden-Württemberg CDU regional group in the German Bundestag. In addition, from 2008 to 2018 he was a member of the advisory board of the Federal Network Agency for Electricity, Gas, Telecommunications, Post and Railway. From June 2017 to 2018, Bareiß was deputy chairman of the board of trustees of the approximately 24 billion nuclear contaminated site fund, which manages the reserves for the final storage of highly radioactive nuclear energy waste.

Bareiß has moved into the Bundestag as a directly elected member of the constituency Zollernalb - Sigmaringen . In the 2005 Bundestag election he achieved the best first- vote result in Baden-Württemberg with 55.5% of the first votes .

Bareiß has also been committed to transatlantic relations for a long time.

In the Bundestag election in 2009 he ran again for the CDU in the Zollernalb - Sigmaringen constituency and received 49.4% of the first votes.

He also ran for the CDU in the constituency of Zollernalb - Sigmaringen in the 2013 federal election and achieved the best result in Baden-Württemberg and the second best CDU first vote result in Germany with 60.7 percent of the first votes. During this legislative period he is a member of the Committee on Economic Affairs and Energy.

In 2016, in addition to his mandate in the Bundestag, he carried out eleven additional activities subject to mandatory publication, of which he paid between 19,500 and 40,500 euros.

As negotiator for business and finance, Thomas Bareiß was instrumental in negotiating the coalition agreement between the CDU and the Greens in April 2016 after the Baden-Württemberg state elections.

In March 2018, Thomas Bareiß was appointed Parliamentary State Secretary in the Federal Ministry for Economic Affairs and Energy. In this function, he represents the Federal Minister of Economics in particular in the Bundestag, Bundesrat and towards the parliamentary groups and is responsible for the areas of energy and medium-sized companies. Furthermore, Thomas Bareiß has been tourism officer since April 2018. As such, he coordinates the Federal Government's tourism strategy and is in exchange for it with other European and international countries. In April 2020, Thomas Bareiß was also appointed as the Federal Government's SME Commissioner. As SME Commissioner, he is in charge of the federal government in overcoming the Corona crisis and is responsible for the SME strategy "Appreciation, Strengthening, Relief", which is intended to strengthen the SMEs that are considered to be of central importance.

Bareiß was a member of the Berlin Circle , an informal CDU internal conservative group of modernization and Merkel skeptics. In 2016, Bareiß distanced himself from the Berliner Kreis.

In February 2013 Bareiß spoke out against an alignment of registered civil partnerships and marriage in adoption and tax law. For Bareiß, the special protection of marriage is based on the mutual commitment to assume responsibility. In addition, the marriage between a man and a woman is the "starting point for starting a family". He also justified his position with the otherwise threatened loss of CDU core voters and the lack of support from the party base.

In April 2013, the Berlin district he co-founded called for an “initiative to combat poverty migration from Bulgaria and Romania”.

In July 2015 Bareiß turned against further German billions in aid for Greece .

In August 2015 Bareiß, together with 72 other MEPs from the platform Abgeordnetenwatch.de a grade of "Unsatisfactory" because he answered on the platform no civil issues. Bareiß justified this in a letter to the editor to the local press with a reference to the alleged lack of seriousness of the platform.

In September 2015, Bareiß criticized Chancellor Merkel in the 2015 refugee crisis in Europe .

In a roll-call vote on a draft law on the fracking ban on April 28, 2016, Bareiß voted no and thus positioned himself for future approvals of (currently very controversial) fracking projects.

In August 2018, he promoted vacationing in Turkey after German tourists were arrested in Turkey in 2017. Because tourism builds bridges between countries that are currently particularly needed.

After the Board of Management of Daimler AG decided to stop making party donations in the future , Bareiß called it “irresponsible, endangering democracy and stupid”.

Bareiß rejects the introduction of a CO 2 tax. The supposedly high costs for broad sections of society are problematic. He is open to CO 2 emissions trading. After the publication of the Rezo video The Destruction of the CDU and the poor performance of the CDU in the 2019 European elections , Bareiß was critical of first-time voters and their demand for a CO 2 tax. In a tweet, Bareiß wrote that when it comes to the CO 2 tax, common sense will ultimately prevail, “when the # first-time voters earn their own money and see for themselves who has to pay for everything.” Then “the choice might look different again ". Climate activists, young influencers and the media criticized Bareiß for this statement, and thousands of Twitter comments turned against his position. The parliamentary manager of the parliamentary group of the left, Niema Movassat , accused Bareiß of aloofness and arrogance in dealing with first-time voters. The CDU politician Ruprecht Polenz also classified Bareiß 'tweet as a mistake. Despite numerous contradictions, Bareiß stuck to his statements

Bareiß is a member of the non-partisan European Union Germany .

For many years, Bareiß has also been on the board of the "Association of Friends of the Archabbey of St. Martin zu Beuron" and has been managing it since October 2017. The association supports the work of the Abbey of Beuron .

Bareiß is also a member of the board of directors of the Albstadt eV training and career advancement center, which supports young people in starting their careers.