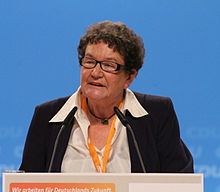 Schipanski at the CDU federal party conference 2014 in Cologne

After graduating from high school in 1962, Dagmar Schipanski studied applied physics at the Technical University of Magdeburg , became a qualified engineer in 1967 and was then assistant or senior assistant at the TH Ilmenau until 1985 . In 1976 she received her doctorate in the field of solid-state electronics . In 1985 she became a lecturer in Ilmenau and in 1990 a professor . Until 1993 she was dean of the faculty of electrical engineering and information technology at the institution that was elevated to a technical university in 1992, and in 1995/1996 rector of the TU Ilmenau. From 1996 to 1998 she was chairwoman of the Science Council of the Federal Republic of Germany. In 1998 she was elected a member of the Leopoldina . She has been a member of the Academia Europaea since 2000 .

Dagmar Schipanski lives in Ilmenau . She is Protestant , married and has three children. Her son Tankred Schipanski has been a member of the German Bundestag since 2009 and is currently (2020) the digital policy spokesman for the CDU / CSU parliamentary group .

1999 Dagmar Schipanski was from the two Union parties CDU and CSU as a non-party candidate for the office of President of the Confederation set up (see German presidential election, 1999 ). After her defeat by Johannes Rau , she was Minister for Science, Research and Art in Thuringia in the Bernhard Vogel cabinet from summer 1999 to 2004 . In 2002 she was President of the Conference of Ministers of Education .

In 2000 she joined the CDU and was a member of the CDU Presidium until 2006. In the state election in 2004 , she was in the Thuringian state parliament elected and had 2004-2009 Landtag President . Since November 2006 she has been a member of the CDU's federal executive committee . From 2007 to 2009 she headed the CDU commission "New Federal States - State of German Unity". In the state elections in 2009 , she lost her mandate in the Thuringian state parliament.

She is an ambassador for the New Social Market Economy Initiative and a member of the Presidium of the Oskar Patzelt Foundation .

President of the Thuringian Parliament

Chair of the Science Council