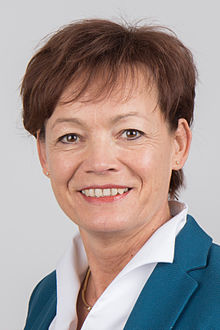 Lucia Puttrich is a daughter of the CDU politician Arnold Spruck . She studied for her Abitur at the Gymnasium Nidda first law at the University of Würzburg before in casting her studies in business administration at the University of Applied Sciences Giessen-Friedberg began. After graduating in 1986 with a degree in business administration , she worked in her parents' craft business before moving to the management of a medium-sized paper processing company in 1988.

She is Catholic, married and has two grown daughters.

In 1977 Puttrich joined the CDU. In 1985 she was elected to the city ​​council of Nidda and was a member of it for ten years. During this time Puttrich was active in the local advisory board for several years . On January 22, 1995, she was elected mayor of the city of Nidda in a direct election to succeed Helmut Jung ( SPD ). She was able to defend her position in two further direct elections.

From 2001 to 2009, Lucia Puttrich was president and vice-president of the Hessian Association of Towns and Municipalities on a rotating basis .

From 2010 to 2014 she was the Hessian Environment Minister in the Bouffier I cabinet .

In the state elections in Hesse in 2013 , she received a mandate from the party on the list. In the Bouffier II cabinet she was appointed Minister of State for Federal and European Affairs on January 18, 2014 .

In the state elections in Hesse in 2018 , she won the direct mandate in constituency 26 ( constituency Wetterau II ) with 29.4 percent of the votes cast . In the Bouffier III cabinet , she was reappointed Minister of State for Federal and European Affairs on January 18, 2019 .

In the German Bundestag , Lucia Puttrich was a full member of the Committee on Economics and Technology and the Committee on Food, Agriculture and Consumer Protection. She was also a deputy member of the Legal Committee. After taking office as Hessian Environment Minister, she renounced her mandate as a directly elected member on September 3, 2010.

Lucia Puttrich supports the Transatlantic Free Trade Agreement and takes a public position against its critics.

Cabinet of the State of Hesse

Environment Minister of the State of Hesse

Agriculture Minister of the State of Hesse

Minister for Federal Affairs of the State of Hesse

Minister for European Affairs of the State of Hesse

Authorized representative of the State of Hesse at the federal level