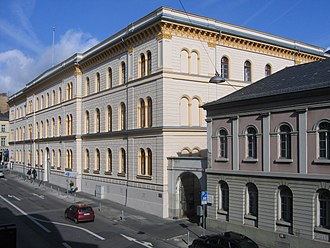 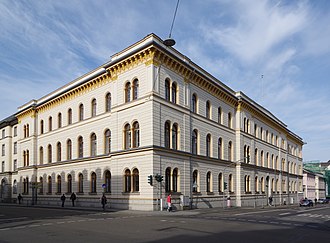 The Ministry of Justice is a supreme state authority and exercises technical supervision over the courts and judicial authorities. According to the provisions of Article 127, Paragraph 4 of the Constitution of the State of Hesse , the establishment of the Ministry of Justice is required. Due to the judicial independence , the ministry cannot issue instructions on factual issues or review judicial decisions.

An essential task of the ministry is to participate in legislative projects at state and federal level.

Further tasks are personnel, budget and construction matters of the judiciary, basic and advanced training of the employees, fundamental questions of the organization, the modernization of the judiciary as well as the judicial examination office. Between February 5, 2009 and January 18, 2014, the Hessian Ministry of Justice was also responsible for questions of integration and Europe and was therefore called the Hessian Ministry of Justice, for Integration and Europe .

The Ministry of Justice is organized into six departments, including the Judicial Examination Office. It currently has around 310 employees; Around 12,300 employees work in the Hessian judiciary.

The Ministry of Justice publishes the Justizministerialblatt für Hessen as the official gazette .

The Hessian Minister of Justice, who is politically responsible for the department, and the State Secretary, who is the head of office and the highest official of the Ministry, are in charge of the Ministry.

The ministry exercises state supervision over the bar associations , the notaries chambers , the pension fund for lawyers in the state of Hesse, and the foundation rehabilitation fund for offenders .

Erbprinzenpalais, the former seat of the ministry

From 1946 to 1968 the Ministry was housed in the Erbprinzenpalais on Wilhelmstrasse. The building is used today by the Wiesbaden Chamber of Commerce .

The building of the Ministry of Justice in the Wiesbadener Luisenstrasse was built between 1838 and 1843 as the seat of the entire Ministry of the Duchy of Nassau . The architect was Carl Boosbekam . The building served mainly representative purposes and contained a throne room and a country class meeting room.

In 1854 the building burned down completely. The architect Philipp Hoffmann was commissioned to rebuild.

From 1925 to 1926 the building was significantly expanded. An administration building was erected, which extended the front on Bahnhofstraße and created a closed rectangle with the addition of two parallel wings to the fronts Luisenstraße / Bahnhofstraße. The building is a cultural monument according to the Hessian Monument Protection Act .

Justice Minister of the State of Hesse

Ministries of the State of Hesse

Ministries of Justice in the Federal Republic of Germany