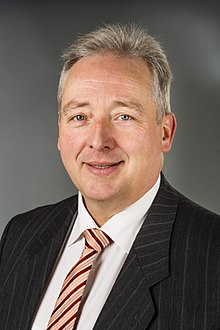 Frank Oesterhelweg (born November 19, 1961 in Wolfenbüttel ) is a German politician ( CDU ) and member of the Lower Saxony state parliament .

After graduating from high school in Wolfenbüttel and doing military service with the Tank Reconnaissance Battalion 1 in Braunschweig , he did an agricultural apprenticeship in the districts of Gifhorn and Göttingen . He then completed an agricultural degree at the Rendsburg University of Applied Sciences and graduated with the degree of Diplom-Ingenieur (FH). He has been an independent farmer in Werlaburgdorf since 1987 .

Oesterhelweg has been active in the Junge Union since 1976 and in the CDU since 1978. Since 2002 he has been CDU district chairman in Wolfenbüttel . In 2010 he became chairman of the CDU regional association in Braunschweig and, in this function, also a member of the Lower Saxony state and national executive committee of his party.

He ran as a candidate in 1994 and 1998 and came in 2002 to replace Rita Pawelski in the Lower Saxony state parliament . In the following year he was elected directly to the state parliament for constituency 13 Schöppenstedt and was the spokesman for the forestry parliamentary group for the legislative period. After a previous internal CDU vote against the previous member of the state parliament, Britta Siebert , Oesterhelweg stood as a direct candidate in the state elections in 2008 in the Wolfenbüttel-Nord constituency and was re-elected to the state parliament with 43.4 percent of the first votes. From 2008 to 2013 he was chairman of the committee for food, agriculture, consumer protection and regional development. He was directly elected again in the 2013 state elections. In the CDU parliamentary group, he is deputy group chairman and spokesman for consumer protection and animal welfare.

In July 2011, Oesterhelweg was defeated by the then left-wing parliamentary group leader Gregor Gysi before the Hamburg district court . Oesterhelweg had referred to this as an "employee of the Stasi". The court prohibited Oesterhelweg from continuing to claim this.

In an article in the “Wolfenbütteler Schaufenster” on January 10, 2016, Oesterhelweg, under the impression of the attacks in Cologne on New Year's Eve 2015/16 , demanded that the police should use firearms if necessary in such incidents . This demand was resolutely rejected on the following day by the police union on their internet portal.

In the run-up to the state elections in 2017 , Oesterhelweg was appointed to the shadow cabinet of the CDU top candidate Bernd Althusmann . It was intended for the environmental department, which Olaf Lies (SPD) took over after the coalition negotiations . Oesterhelweg, however, was elected Vice President of the State Parliament.

In 2018, Oesterhelweg initiated a debate about the establishment of a CSU regional association in Lower Saxony.

Further memberships exist u. a. in the volunteer fire brigade , in the DRK , in the White Ring , at the Wolfenbüttel traffic watch and at the DLRG .

Oesterhelweg is married and has two daughters.