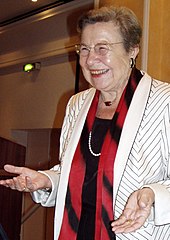 Ursula Maria Lehr , born Leipold (*  5. June 1930 in Frankfurt am Main ) is a German scientist in the field of gerontology , psychology and former politician of the CDU . From 1988 to 1991 she was Federal Minister for Youth, Family, Women and Health . From 2009 to 2015 she was chairwoman of the Federal Working Group of Senior Citizens' Organizations (BAGSO). Since November 2015 she has been the deputy chairwoman of BAGSO after Franz Müntefering took over the chairmanship.

After graduating from high school in 1949, Ursula Lehr studied psychology, philosophy , German literature and art history at the universities of Frankfurt am Main and Bonn , which she graduated with a degree in psychology. In 1954 she received her doctorate as Dr. phil. with Hans Thomae with the work contributions to the psychology of the periodic in child behavior . She then worked as a research assistant at the Psychological Institute of the University of Bonn. Here she completed her habilitation in 1968 with the thesis “Professional and life fate - the professional activity of women from a developmental and social psychological point of view” . In 1969, she was appointed adjunct professor .

Professor in Cologne, Bonn and Heidelberg

At the end of 1998 Lehr retired as professor at Heidelberg University . From 1997 to 1999 Lehr was President of the German Society for Gerontology and Geriatrics .

Lehr is considered to be a “gerontologist from the very beginning” and a source of inspiration for two generations of German university lecturers in this field. She is also active internationally for and in gerontology to this day.

Her first research topics in the 1960s were the living conditions of working women and the performance of older workers. Lehr showed that psychological tensions in mid-life are less physically caused ( climacteric ), but are more associated with role conflicts in the family and the role of daughter vis-à-vis the aging parents (especially support in emergencies as well as help and care). It was not until many years later that governments and the public noticed the physical and psychological stresses caused by elderly care within the family , so that politicians are considering further assistance in accordance with the Care Insurance Act of 1995.

In the context of family psychology, Lehr also dealt with the development opportunities for mother and child that arise from successful employment of women, as well as with the mutual suggestions between father and child. Their research on developmental psychology confirmed the value of a shared responsibility of the parent couple raising children and the childminder model. 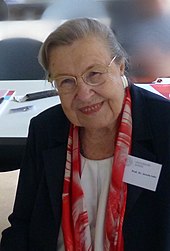 Ursula Lehr after her lecture at the University of Leipzig Lifelong Learning on October 9, 2019

The second focus of her research was the professional performance of older workers. As early as the 1960s she was able to demonstrate the advantages of an age limit that is flexible on both sides . The professional performance of older workers is comparable to that of younger workers, but they are often exposed to discrimination in the company. These are an expression of a negative image of old age and a youth-centered employment policy. In the context of these research projects, there are also contributions to preparation for retirement as well as to the creative organization of the post-employment period.

Ursula Lehr and Hans Thomae initiated the first German longitudinal study on late adulthood, its psychological development processes and the interaction with physical and social changes ( Bonn gerontological longitudinal study , BOLSA). The study ran jointly with Hans Thomae (Bonn) from 1965 to 1987 and for the first time implemented an interdisciplinary approach to gerontological research in Germany. Their central finding was the evidence of large differences between senior citizens of the same age in the form of their aging and their aging processes, which was confirmed in further empirical studies. Lehr defines development in old age as a process influenced by biological, social, ecological and personality-specific factors (“inter-individual differences in intra-individual forms of aging”). The essential conclusion from this is the self-responsible shaping of aging . As a further research topic, the question arose to what extent development processes in old age can be promoted through specific forms of intervention .

In order to be able to research these aspects, which are becoming increasingly urgent personally and socially, in the course of her appointment to the University of Heidelberg in 1986 on behalf of the state government of Baden-Württemberg , Lehr founded the Institute for Gerontology and began setting up the postgraduate course of Gerontology.

The Institute of Gerontology was able to quickly develop a clear research profile under her and concentrated on development processes in old age, coping with his demands and stresses and his role model (“ old age”). In addition to promoting everyday and cognitive skills , the performance of older employees is also examined. In 1991 the institute received the status of a WHO collaboration center, which gave a strong impetus to the exchange with international gerontological institutions and led to several WHO congresses in Heidelberg. The Ordinaria has introduced an interdisciplinary approach to teaching, which has an impact , among other things, in close cooperation with geriatrics and geriatric psychiatry in training to become a qualified gerontologist. The main focus of teaching is not only knowledge of basic research but also that of intervention research . In 1997, Andreas Kruse became the new director of the institute.

Shortly after being appointed Federal Minister of Family and Health, Lehr began to work on the establishment of the German Center for Aging Research (DZFA), which was considered necessary . Under her leadership, the sixth future congress "Aging as an opportunity and a challenge" in Stuttgart in mid-November 1988 dealt with interdisciplinary aspects of aging. Prime Minister Lothar Späth took up the proposal for a German research center and agreed federal-state funding with Federal Chancellor Helmut Kohl . As early as November 28, 1988, the state government of Baden-Württemberg passed a fundamental resolution and the Federal Ministry of Science formed a working group to define the research concept. In October 1990 the final report was sent to the state of Baden-Württemberg, which approved in November. But the negotiations on federal-state funding dragged on for years, and the DZFA owes its establishment as a foundation under public law on September 30, 1995, to the persistence of Lehr. As founding director, Ursula Lehr ensured a balanced mix between interdisciplinary basic research and her own Implementation in practice as well as in political decisions.

Two years later, the expansion of two of the four institutes was completed and the first research results were available. The "Department for Development Research" (Peter Martin) examines changes in experience and behavior in adulthood, the development of cognition , personality and social networks. His applied research concerns the maintenance of physical and mental health into old age, e.g. B. centenarians (in Germany about 10,000 people). The first major project under Lehr was the interdisciplinary longitudinal study of adulthood ( ILSE ). This study, funded by two ministries since 1992, examines the conditions for healthy and happy aging in cooperation with doctors, psychologists, psychiatrists and sports science .

The "Department for Social and Ecological Gerontology" ( Hans-Werner Wahl ) researches age aspects of the person-environment relationship with a focus on the spatial-material-technical environment of old people. Specifically, it is about living, living environment and age-appropriate design, as well as the willingness of seniors to be mobile (e.g. moving, new technology). It also examines how disabilities in seeing or walking influence the process of aging.

The start of the two youngest departments was already the responsibility of Ursula Lehr's successors. The “Department for Epidemiology of Diseases and Functional Impairments in Old Age” has been researching the frequency and risk factors for diseases and the resulting restrictions since 1999/2000 . The department for intervention and rehabilitation research started its activity two years later.

Since its final expansion, the DZFA has for the first time united all the disciplines that are important for gerontology under one roof. German and international aging research is feeling the impetus of this innovation . In addition, Lehr's political activity has led to greater public interest in demographics and a greater understanding of normal aging processes.

Ursula Lehr has two sons. After the death of her first husband, she married a second time, the psychologist and gerontologist ( Hans Thomae ). Today she lives in Bonn- Bad Godesberg . There she is involved u. a. on the board of trustees of the Rheinviertel community foundation .

Lehr has been a member of the CDU since 1986 . In 1990 she became a member of the German Bundestag for four years , for which she was a candidate on the state list of Hesse.

Her work on the work of women and the repercussions on health and the productivity of older workers became politically relevant . She thus qualified in a special way for her later office as Federal Minister of Family and Health.

On December 9, 1988, she was the Federal Minister for Youth, Family, Women and Health in the by Chancellor Helmut Kohl led government appointed. As a well-known gerontologist, above all she succeeded in expanding senior citizens policy . In 1989, she initiated the Federal Government's first report on the elderly.

In the course of 1989 she got into hard controversy with her CDU / CSU parliamentary group when she called for childcare for over two-year-olds (" toddlers "). She argued with the strong increase in only children whose development lacks the social influence of siblings (see also family policy and social role ).

Ursula Lehr has been the driving force behind the establishment of the German Center for Aging Research (DZFA) in Heidelberg since 1988 and became the founding director of this foundation in 1995.

From 2004 to 2008 she was President of the Association of Former Members of the German Bundestag and the European Parliament, from 2009 to 2015 she was Chair of the Federal Working Group of Senior Citizens' Organizations (BAGSO).

Ursula Lehr is a member of the board of trustees of the aid organization CARE Germany .

Health Minister of the Federal Republic of Germany

see also: Office holder since 1961 of both German states